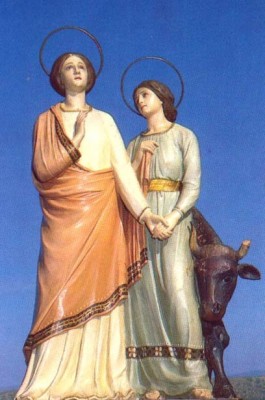 March 7 is the feast day of Perpetua and Felicity, two young mothers martyred for their outlawed Christian faith in Carthage in the year 203 A.D.  Together with three others they were condemned to be mauled to death by wild animals as a spectator sport in the coliseum. We hear the names of these two women martyrs are repeated continually in Order of the Mass which you can read in the Catholic Missal, a great honor given to them by the Holy Spirit working through the Church.

Perpetua was a 22-year-old noblewoman and mother, while Felicity was a young pregnant slave girl (some accounts say that Felicity was Perpatua's slave). Both were catechumens on their way to being received into the Church. At the time of their arrest, Perpetua was still breastfeeding and Felicity was far advanced in her pregnancy.

They were both arrested and imprisoned for admitting that they were Christians, and they both looked forward to their martyrdom. In one account, Perpetua asked to be arrested for her Christian faith before she was even baptized (she was baptized in prison). Felicity began to worry that her pregnancy would delay her martyrdom. 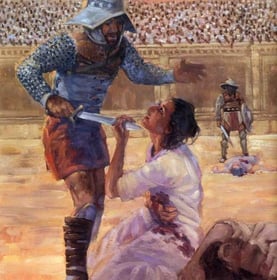 There is a fascinating historic account of their martyrdom called The Passion of the Holy Martyrs Perpetua and Felicity which you can read here. Parts of it are a first-hand prison diary account written by Perpetua herself. What is remarkable about their stories is their willingness to suffer and die for Christ while entrusting their children to the care of others. This was incredibly difficult to do, as Perpetua described. In her words:

"After a few days we were taken into prison, and I was much afraid because I had never known such darkness. O bitter day! There was a great heat because of the press, there was cruel handling of the soldiers. Lastly I was tormented there by care for the child. Then Tertius and Pomponius, the blessed deacons who ministered to us, obtained with money that for a few hours we should be taken forth to a better part of the prison and be refreshed. Then all of them going out from the dungeon took their pleasure; I suckled my child that was now faint with hunger. And being careful for him, I spoke to my mother and strengthened my brother and commended my son unto them. I pined because I saw they pined for my sake. Such cares I suffered for many days; and I obtained that the child should abide with me in prison; and straightway I became well and was lightened of my labour and care for the child; and suddenly the prison was made a palace for me, so that I would sooner be there than anywhere else. "

St. Felicity advanced to her eighth month of pregnancy while in prison.  Not wanting her pregnancy to prevent her from being killed with her companions, she prayed for a premature delivery which is recounted here:

"As for Felicity, she too received this grace of the Lord. For because she was now gone eight months (being indeed with child when she was taken) she was very sorrowful as the day of the games drew near, fearing lest for this cause she should be kept back (for it is not lawful for women that are with child to be brought forth for torment) and lest she should shed her holy and innocent blood after the rest, among strangers and malefactors. Also her fellow martyrs were much afflicted lest they should leave behind them so good a friend and as it were their fellow-traveller on the road of the same hope. Wherefore with joint and united groaning they poured out their prayer to the Lord, three days before the games. Incontinently after their prayer her pains came upon her. And when by reason of the natural difficulty of the eighth month she was oppressed with her travail and made complaint, there said to her one of the servants of the keepers of the door: You that thus make complaint now, what wilt you do when you are thrown to the beasts, which you didst contemn when you would not sacrifice? And she answered, I myself now suffer that which I suffer, but there another shall be in me who shall suffer for me, because I am to suffer for him. So she was delivered of a daughter, whom a sister reared up to be her own daughter."

Perpetua, Felicity, and their companions converted the jailer to Christianity, as well as many of the coliseum spectators who witnessed the unusual noble and fearless deaths that became the hallmark of Christian martyrs. One account even says they exchanged a kiss goodbye before they were finally executed by a gladiator. The accounts of their martyrdom is profound, that they were able to follow Christ to the death while entrusting their infants to God's providential care.