If the Jesuits were pleased before that the new pope was one of them, they must be over the top, now that Pope Francis has released his coat of arms. The dominant figure in the heraldry is the Jesuit symbol, IHS, from the first three letters of the Greek word for Jesus, surrounded by a sunburst, with a cross above the letter “H” and three small nails beneath. Under the sunburst, on a blue background is a five-pointed star on the left, symbolizing Mary, and on the right, an aromatic spikenard resembling a grape bunch, signifying St. Joseph. It is the same coat of arms Pope Francis had as archbishop of Buenos Aires, except now it rests on the papal keys and beneath a miter. His motto is the episcopal motto from his ordination as bishop: “lowly but chosen.” 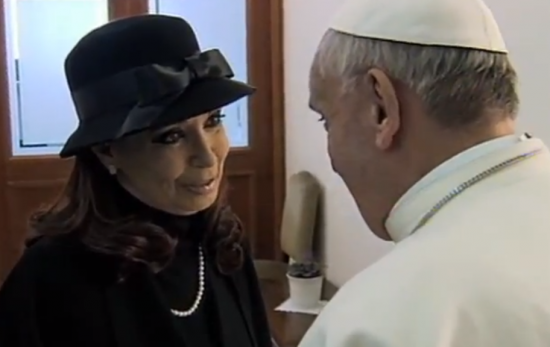 He met today with one who had been his nemesis, Argentine President Cristina Fernández de Kirchner. They have clashed over political issues such as gay marriage, but she brought him a gift – a gourd and straw -- to hold the Argentine herbal tea he reportedly likes. He received her with a kiss, first time she’s ever been kissed by a pope, she said afterwards.

He uses the word “mercy” often, which touches my heart as a Sister of Mercy. Given that and yesterday’s homily at Mass and his Sunday Angelus address afterwards, we’re seeing an emphasis on compassion over judgment and an invitation to seek forgiveness from a God who is waiting to offer it.

This evening I attended a reception sponsored by the U.S. Embassy to the Holy See in honor of Vice President Joseph Biden and the U.S. delegation to the inauguration Mass.  Among those in the delegation are Jack DiGioia, president of Georgetown University, former Speaker of the House Nancy Pelosi, Rep. Loretta Sanchez of California and Gov. Susana Martinez of New Mexico. Vice-President Biden noted the installation will be on the feast of the saint for whom he is named.

He spoke of his love of theology and having even discussed  theological concepts with popes. Also there was the chaplain of the House of Representatives, Jesuit Father Patrick Conroy. He was especially pleased when I told him the pope’s coat of arms included the insignia of the Society of Jesus.

Tomorrow promises about one million people to pack the square and overflow down via della Conciliazione and into all the side streets. I’m supposed to be on the set of CNN. Hope I get there.

Sister Mary Ann Walsh is the media relations director for the USCCB.