3 Lessons Learned at the Playground 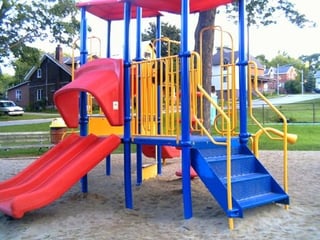 3 Lessons Learned at the Playground

I remember the playground being a fun experience as a very young child and more of a competition as I grew older.  Clicks began to form and lines were drawn.  Fortunately, recess ended in sixth grade, but the hallways and locker gossip filled its place.  My son is only four and the playground has already made its impression on his ego.  There are lessons at the playground one must learn.

1.  Not everyone is your friend.

There were two girls who refused to play with my son.  They kept telling him to go away.  He was trying to be friendly and I overheard one of the girls say that her daddy told her not to play with boys.  They were only four or five and already had been told to avoid the opposite sex.  I will assume that this rule was made out of love and safety, but at the same time, why are we segregating sexes at such a young age?  It is not even the age of cooties, boys chase girls, or even junior high dances.  Yet, it pains me to see my son subjected to this cruelty and rejection so early in life.

My son, Linus, insists on not only playing with every kid at the playground, but especially the older boys.  They see Linus as a little boy who can't do everything they can.  He feels left out when they won't include him and doesn't understand that their games might be too rough or mature for him.

Children at the playground need to be reminded to take turns and share toys, swings, and slides.  There is sometimes pushing to be the first on the slide or grabbing away of sand toys, but time and again, parents nearby repeat the rules of sharing.  I often think that we, as parents, have a hard time sharing our coffee, wine, and cell phones.  Though those are things our young children shouldn't be having anyway.  But to a young child, we are not sharing.

The playground is our first taste of the real world.  It is a glimpse into what dealing with different personalities is like.  God made us all unique, but most of us could improve our people and cooperation skills as any young child needs to.  After all, children mimic what they see.