NOTE: Two days after the Easter Octave of 2011, on May 2, 2011, Seal Team 6 killed Osama Bin Laden in Pakistan. This piece was written then, but the issues are still fresh post-Easter and the period known as mystagogy 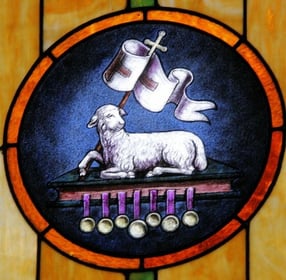 Michael Steele was on Rachel Maddow last night and I have to say that he’s actually easier to listen to and less bombastically comical as the former RNC chair than he was when he was supposed to be advocating the full throated defense of the Republican national agenda.

He and Rachel were discussing the assassination of Osama Bin Laden and the Republican reaction to it. Mr. Steele said at one point, “Let me lay down the predicate…” and the phrase struck me as odd because it was unclear in the lively exchange between the two what the actual SUBJECT was. So the lively turn of phrase simply left me puzzled.

Mystagogy is a puzzlement too. On one hand, it is perfectly natural that it be so. It is, after all, the experience of deep mystery. THE experience of THE mystery at the heart of Christianity. But it’s also a puzzlement to the cadre of neophytes and those welcomed into full communion with the Church who probably never spent much time thinking of themselves in terms of Inquirers, Catechumens, Candidates, Illuminati even though we lavished such subjective and adjectival phrases upon them as we evangelized and attempted to “lay down the predicate” of Christ, the Resurrected One.

Like Luke’s story of the Road to Emmaus proclaimed during the Easter Season, it all depends where you enter the story. It has many beginnings that lead to the breaking open of Word and Sacrament and that moment of recognizing the Risen One, even as He vanishes from sight.

In the face of the Octave of Easter, the accelerated Beatification of “the Great” John Paul II, Divine Mercy Sunday, Holocaust Remembrance Day…we were met with the news that at the hands of our nation, we kept our promise in name of justice, to rid the earth of Osama Bin Laden.

Spontaneous joy erupted, followed by cycles of reflection at many different levels. Various media noted that young college aged youth were the most exuberance noting that they would have been 10 years even younger when the actual events of September 11th happened in 2001.

The “older generation” and the somewhat new to being older, and those “tweeners” who fought and served in active military, were more sober and somber. They asked questions about what this meant for foreign policy, the war on terror, our relationship with Pakistan. And in general, asked us to look back down the road we had traveled for almost the last decade. How did we get here? What is our story?

At the Easter Vigil, Jesus appears to Mary, who had come to visit the tomb. She encounters him and he instructs her to go tell the Apostles that he goes ahead of them to Galilee. She becomes first witness. We are given our hope and mission. But at the Easter Sunday afternoon mass, the Gospel instead tells the story of the Empty Tomb. Mary is heartbroken at the sight and runs to the Apostles to tell them that someone has taken him away! Peter and John run to the tomb to find it empty. And they see (nothing) and believed.

Those of us remember how long we watched the TV a decade ago. How many times did we see the towers fall? Was that somehow different from when they fell the first time?

Everyone begins their story with how beautiful and clear the weather was along the northeast corridor. And we travel our different roads from there.

United Flight 93 went to ground in Stonycreek Township, PA. The marred face of the Pentagon was repaired after months of anti-aircraft artillery watched over the I-395 and Route 50 commutes into DC. And the Twin Towers which dug their own sacred ground hallowed out in lower Manhattan began to rise in the dreams of a nation wrestling with what might grow out of this new soil.

For some reason, there is talk now about whether to release photographic “proof of death” for Osama Bin Laden, who himself was buried at sea. In a nation of Roswell and Birthers, what are we to do with the “Doubting Thomases?”

A friend of mine who posts her nature photography on Facebook coincidentally posted an album on the same date/time that we pondered these national and religious immensities. The album showed newborn lambs, some just a few hours old. There was a human part of me that wanted video of the live births, but instead I commented truthfully that I don’t know if I’d ever seen newborn lambs. The image is so biblically fresh in my mind, but in my own reality check with myself, I could only take this moment as gift…and epiphany.

Other friends on Facebook, during the same period, talked briefly about Osama and Obama offering their own insight and reflections. I wanted to say something to the effect that I appreciate most the counsel and reflections of those who work with dead bodies as part of their normal realm of activities: priests, morticians, those in hospitals or palliative care. It’s these people that I find have the most interesting and truthful things to say.

I read a NY TIMES piece on the Monday after Osama Bin Laden was killed. It talked about the different reactions in NY and elsewhere to his death. It closed with talking about two mothers who gave birth while the President was delivering his late night message. One of them gave birth to a boy, her second child. She remarked that she wondered in general (as many parents do), what kind of world she’d be bringing her child into. Better or worse? Safer? She remembered Sept. 11th. The article mentioned that she was currently 26. What a world she has lived through as a mother thus far.

In my time at work we are often amazed by the young people who come to us to celebrate their weddings. It’s not an easy life out there. We wonder will we see them again? Will we only see them again when they have children?

This is the “quiet” time at work as the Religious Education year winds down. But it is also the time that parents and children come to me with their concerns about sacramental preparation. It’s the time that people sit in my office and talk to me about whether they really should be here because they don’t believe in “God” or some other set of beliefs or other hang-ups.

I had an 8th grader here just the other day with her mother and I’m not entirely sure I did my best to do what St. Peter intimated when he said, “You will be called to make an account of the hope that is within you.”

I hope I left her and her family with the sense that if you make up your mind about something so vast and important as “Is God in our midst or not?” at the tender age of Grade 8, and leave it there, you may be ill equipped to engage the deep mystery of life that has yet to unfold when that is all you have.

I myself am just passed 40 years of age and am even more convinced that I have seen a Risen Lamb.

Seeing Poetry in the Communion Line
Read
John Fialka: Seeing Around Corners
Read
Seeing the Mass as a Tourist
Read