I don’t know whether to be grateful to my good friends at Starbucks and iTunes for making a $1.99 app free with their magic code, or whether to give them a piece of my mind for introducing me to yet another game that lures me in when I’m supposed to be doing something else.

And it’s the "piece of my mind" part that sucked me in in the first place. As someone who’s over 50, I’m a sucker for games that promise to keep me sharp, building neural pathways and all of that. I like the idea that there’s something deeper at work when I’m wasting time on my iPad. 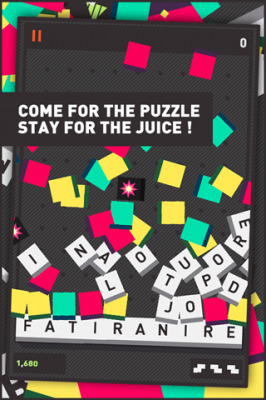 Puzzlejuice didn’t exactly promise any of those things, but the tagline on the free app card at Starbucks was “Test your spatial and verbal skills.” From there, it’s not a huge leap for those of us seeking a good excuse to check out a new game for free, and it’s only a baby step for those of us using this column as an excuse to do the same.

The verdict? I love this game. Part Tetris, part Scrabble, it really does require the use of both spatial and verbal skills.

Color matching segments of the rows is to a player’s advantage because it’s like-colored sections that get obliterated - and the bigger the section, the more space that’s cleared and the longer the game lasts.

As a writer who loves Tetris (despite having substandard visual-spatial skills), I quickly decided that I love this game. Curious as to whether or not I was deluding myself over the potential value of a game app, I searched online to see if there was any evidence that Tetris builds visual spatial skills. I found an article from Johns Hopkins that suggests that it can do just that, so maybe I’m not totally kidding myself when I rationalize that I’m building visual-spatial skills and paving neural pathways when I play this game.

I have no research that addresses the benefits of adding a verbal component (turning combinations of letters into words of three letters or more) to the game, but I can tell you that this is not a game I can play while doing something else. Words With Friends is one of my biggest iPad addictions, but I can play WWF while watching television. Puzzlejuice requires a greater level of concentration; I am, after all, filling in spaces, matching colors and creating words pretty much simultaneously.

If that sounds fun to you, you should definitely check it out. It’s not usually a free app, but the expiration date on my App Pick of the Week card from Starbucks/iTunes is August 20 - so it’s free until then if you pick up a (free) card at your local Starbucks.

Now if you’ll excuse me, writing this column has whetted my appetite for improving my visual-spatial skills.