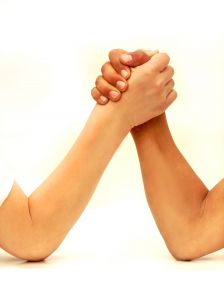 What are Christians to think when thousands of atheists gather and make plans to mock and belittle them?  There’s only one thing to think:  We win!

In an intellectual debate, logic and evidence are the stuff a winner relies on. For Christians, prayer and love are added in.  But making fun of your opponent?  That is not an intellectual tactic.

That is, however,  the advice Richard Dawkins, author of the best-selling The God Delusion, gave to an estimated twenty-thousand fellow atheists who showed up at the National Mall in Washington, DC last March for the Reason Rally. It was billed as a coming out rather than an anti-religion rally but it seems that being anti-religion is the glue that holds them together.

As reported in  USA Today, five hours into the event, amid a constant drizzle, (Yeah, it makes me want to cry too) the British scientist and rabid atheist appeared. The article stated:

"Then Dawkins got to the part where he calls on the crowd not only to challenge religious people but to 'ridicule and show contempt' for their doctrines and sacraments, including the Eucharist, which Catholics believe becomes the body of Christ during Mass."

To clarify just what he meant, Dawkins modeled an example of how to use dirty tactics. According to the The Christian Post

“Exemplifying how he would approach religious persons, Dawkins said, ‘Do you really believe, for example if they’re Catholic, that when a priest blesses a wafer, it turns into the body of Christ?”

“Mock them, ridicule them in public,” he urged. “Don’t fall for the convention that we’re all too polite to talk about religion.”

The Art of Debate

This is an odd coming from a scientist. Debaters are taught to know their stuff and argue the facts, not stoop to making fun of an opponent.  According to a study published by The Journal of Technology Studies,  teaching students to debate hones their critical thinking skills. There is no mention of name calling skills.  "Debate requires you to think on your feet and respond to tough questions with knowledge and grace, and the skills you acquire through this discipline will improve your ability to communicate in everyday situations," the study stated.

So what are we to think of Dawkins' instruction to his flock?  It would seem that relying on reason is not their strongest suit but rather resorting to bullying is more their style.

I have always been taught that when one side starts to ridicule, it’s because he’s run out of intellectual ammo and has nothing left but intimidation. I believe it’s why so often, when people are praying in front of an abortion clinic, drive-by obscenities are shouted from car windows. On one side is a group of self-sacrificing people, standing and praying for others:  the unborn, their mothers and even the abortionists. The group is calm but firm and willing to engage in conversation with others. On the other side is the “F-You!”  Oh, there are those wanting to engage in serious debate—often angry and lacking in information.  But only one side employs ridicule and name calling—the side that comes up short on logic and good will.

In the case of atheists, what is it they are so angry about?  Why does one of their leaders unabashedly encourage followers to skip the logic and make fun of people?

I am somewhat glad to hear Dawkins advocating these tactics. It means that more people will experience an epiphany moment:  Something is not right with this picture.  More people who blindly followed and fell for the argument that atheism is based on science and logic, will perhaps feel something stir in their hearts when they find themselves in the middle of a debate that ends in name-calling.

Given we are all people of faith—some believe in God as creator and some believe nothing created us—perhaps the difference in tactics will appeal to hearts and minds. The rally cry to Godlessness has such a hollow ring. Making fun of opponents carries a sharp and angry feel.  It is why we must take care not to lose our cool. Christian leaders offer the exact opposite advice. They appeal to the faithful not to name call, lest a debate end with:  “You’re stupid! …No, you’re stupid!

If this were a cartoon strip, I might almost laugh. Think about it; an educated scientist who scoffs at religion shares his secret weapon:  Let’s make fun of people. Does this sound childish?  Not even in grade school would kids admit publicly to such a plan.

But you’ll not see me laughing over any of this. Only praying and praying hard.