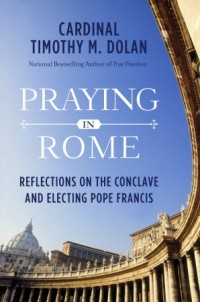 Today's Book Note is about a book that hasn't landed on my desk yet, but one I'm anxious to read: Praying in Rome: Reflections on the Conclave and Electing Pope Francis. This e-book will be launched on July 9th at the amazingly low price of $1.99. Here's an overview:

The Archbishop of New York offers his insight on his time in Rome, the Conclave and the election of a new Holy Father, Pope Francis. Since February 2013, many have asked Cardinal Timothy Dolan to comment about Pope Benedict XVI’s resignation, his final days in the Vatican, the Conclave, and the excitement and joy of the election of Pope Francis. Those two months–between the time Pope Benedict announced his retirement up until the election of Pope Francis–were a deeply spiritual and important period for the Cardinal. In this eBook original, he reflects on that most exciting of times. By turns, witty, provocative, and inspiring Cardinal Dolan gives a first hand account of what happened during those days and what it means for the future of the Church.

While the book isn't officially released yet, you can actually read the introduction online now:

Pre-oder Praying in Rome: Reflections on the Conclave and Electing Pope Francis and support CatholicMom.com with your purchase