Queen of the Multiple Screens

I had seen others do it. Most of them were really smart people with a much better grasp of the nuances of technology than I. Many were in the entertainment business, responsible for running lights, sound, and even entire shows. Some were geeks, some were geniuses, some were both.

I never thought it would happen to me.

I blame the iLife. Though the laptop might have been my gateway drug, I think it all began when I succumbed to the lure of the iPad. Suddenly, I had music, email, and Internet access not only at my fingertips, but in my lap. Where I went, all of those things could also go.

I’m doing it now. Simultaneously trying to load a game onto my iPad screen while I type this post, then switching to a little mood music just by touching a screen. As a Josh Wilson song plays through the speakers of the device to my left, I type a confession on the keys of my laptop.

I am a multi-screen user. 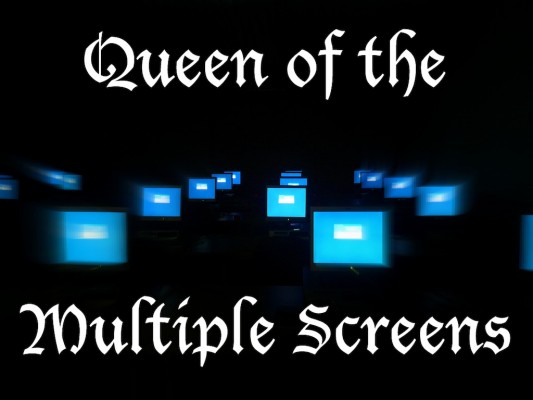 It’s excessive, I know. I mean, how many people have only one screen at their disposal while I, a willing participant in the iLife, access my word processing app on the screen of my MacBook while my iPad plays music and my iPhone chimes to tell me a text is waiting?

How did this happen?

Once upon a time, I was chained to a desk -- figuratively at least -- if I wanted to do any work on a computer at all. Now, I catch myself reaching for one device while working on another, whether to check a text, a fact, or an e-mail.

It’s wildly convenient. Perhaps too much so.

Research on multitasking warns us that constantly shifting from one activity to another affects our brains. Dr. Clifford Nass, author and professor at Stanford, says that people who multitask all the time can’t filter out irrelevancy and even become chronically distracted.

But not all multitasking is bad. Because the creative brain seeks to make new connections, when the things we’re jumping between are related to one another (writing a blog on multitasking while listening to a podcast about multitasking, for example), we feed our brains. Jumping from the piece I’m writing to a text from my daughter to an email from an editor reminding me that my post is due? Not so healthy.

As someone who came of age before technology was king and multitasking was queen, I can feel when I am straining my brain. I know when it’s time to turn off the music (I did that about four paragraphs ago), mute the television, or stop trying to simultaneously watch Friends and play Words With Friends.

Our kids, however, will have more difficulty with this. Growing up with screens in every corner of their world, they quickly succumb to their lure.

As with all things, moderation is key (at least in my opinion). Because screens are everywhere (my husband’s new car has a screen for the radio!), banning all things electronic only postpones the inevitable.

Instead, we need to teach our kids how to balance tech time with quiet time, as well as being cautious about how often we employ electronic babysitters, whether in the form of the television or the smartphone. Sure, they keep the kids occupied, but the events playing out on the screen of the world outside their windows can be quite tantalizing as well, though they will need us to remind them of this.

And, as with so many other things in life, we need to set an example. If the only face time our kids see us take advantage of is on a smartphone, they’re likely to do the same.

Addicted as we are to our devices at my house, cell phones, iPads and computers don’t go upstairs at bedtime -- that has been the rule from the very beginning.They aren’t invited to the dinner table, either.

When it comes to email, Dr. Nass recommends tending to it in 20-minute chunks -- long enough to keep your brain from feeling like a ping pong ball or Pavlov’s dog checking in at any chime.

And when it comes to chimes and work time, I’ve learned I need to keep mine turned off (with the exception of the text chime when my daughter and I are not in the same location). I don’t need to know what’s going on on Facebook or what’s dropped into my inbox when I’m trying to focus.

Make no mistake: I plan to retain my title as Queen of the Multiple Screens. But with great power comes great responsibility, and so I need to manage my iLife responsibly.

After all, it’s not only my brain that’s at stake. My daughter is watching.