Congratulations to our friend and fellow Catholic author Laura Pearl on her recent award recognition. Definitely check out Finding Grace for the young readers in your family! LMH 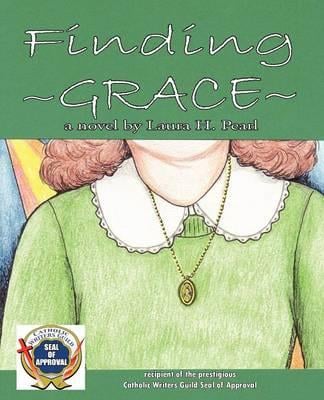 Catholic mom—and author—Laura H. Pearl recently attended the Catholic Writers Guild conference held in Somerset, NJ, where the winners of the Guild’s annual literature awards were announced at a breakfast hosted by the Catholic Marketing Network.  Pearl’s debut novel Finding Grace, published by Bezalel Books in 2012, was a finalist for the 2013 Catholic Arts & Letter Award (CALA) for best fiction in the children’s/young adult category.

Pearl experienced many firsts at the CWG conference, including connecting in person with other Catholic authors she’s long admired and attending a Mass celebrated by Fr. Frank Pavone of Priests for Life.  To top off the excitement, she was interviewed about her book by Doug Keck, host of EWTN’s “Bookmark.”

Back on November 18, 2012, not long after its publication, Finding Grace was featured here on CatholicMom.com in an article titled “Finding Grace: A Novel to Inspire Young People”.  Since then it has earned the CWG’s Seal of Approval and been recognized as a CALA contender.  It’s been an exciting year!

Finding Grace can be found at Bezalel Books.com and on Amazon.com.  And you can visit Laura at her blog, “String of Pearls”.