Saying Yes: A Leap of Faith

The biggest leap of faith I’ve ever taken was adopting our newborn son.  We knew very little about his birth parents except that his time in the womb lacked stability.  Like all parents called to adoption, we said yes anyway.

It made me wonder how much Our Lady really knew when God called her through the angel Gabriel.  From Luke’s account, it appears that the good news came first—she would encounter the Holy Spirit and become the mother of the Savior, whom the angel promised would rule over a kingdom with no end.  So far, so good.  But what other details did she know for certain when she said yes? 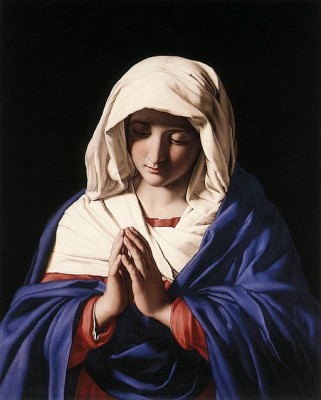 I found what I believe are some answers in the book The Life of Mary as Seen by the Mystics, compiled by Raphael Brown.  To enjoy the book, one must accept the idea of private revelation to four women mystics, revelation that in itself contains descriptions of Mary’s life that are chock full of supernatural occurrences (a mystical double-whammy, if you will).

The book’s introduction admits that there are some contradictions in the accounts of the four women and advises that the work should not be taken as a historical biography of Mary.  Still, there are patterns that emerge in the stories they recount.  For instance:

1. Mary prayed constantly and had a vibrant interior life both before and after the Incarnation.  She was deep in prayer at the time of St. Gabriel’s visit, and her most fervent prayer in the years before she conceived was for the coming of the promised Messiah.  In her perfect humility, she had no idea that she would be called to such a glorious role in God’s plan.

2. Mary’s life was filled with charitable acts.  Despite her own poverty, she fed the poor and comforted the distressed.

3. Mary was a motherly advisor to the Apostles and had a particular affection for St. John the Evangelist.

4. And lastly, the answer to my question: Mary was extensively educated in Old Testament scripture from the time she was a young girl.  She would have recognized that her Son would be Isaiah’s Suffering Servant, and she would have likely understood the pain that she would experience as she watched His life and death unfold.

She said yes anyway. According to the mystical accounts, Mary was then in fact given knowledge of the “mysteries of the life and death of her Son” in a vision that occurred at the same moment as His conception.

The Life of Mary as Seen by the Mystics provides many other insights into Mary’s life and character, and I highly recommend it to those trying to draw closer to Our Lady.

What books have you read that have led you to know Mary better?  Have you found any books that have helped you to lovingly imitate her as you strive to fulfill your vocation and cultivate virtue?

Order The Life of Mary as Seen by the Mystics and support CatholicMom.com with your purchase!