The Power of Names

We have officially started the new Word document: Baby Names for #3.

Of course there are the carry-overs: the girls’ names we’ve never gotten to use, the boys’ names that were runners-up before. There are also fresh additions: a few new inspirations to test out on our tongues and see if they sound right.

And then there are the names already crossed out: four of our favorites from the list’s two previous versions are now tackling each other in the next room. Two pairs of first names and middle names that fit together perfectly: now we can’t imagine life without them.

Perhaps it’s a dreamy part of pregnancy, this playing with possibilities, this lying in bed at night wondering what we’ll call him or her.

But I find it a daunting prospect each time, to name another person. To shape the beginning of identity by vowel and consonant. To help mold their life by the meaning of what they are called.

Sometimes I wish the perfect name would be dropped in our laps, so we wouldn’t have to worry about choosing the right one. 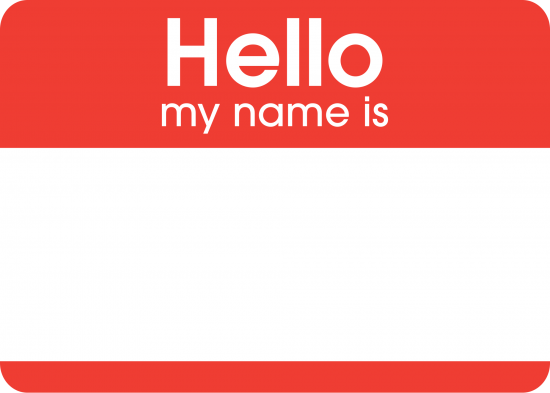 Advent and Christmas are full of naming stories. Angels and dreams tell Mary, Joseph, and Zechariah what their children will be named.

Jesus, because he will save his people from their sins. John, which means Yahweh has shown favor.

The pronouncements of their names are linked to powerful prophecies: who these babies will become and what they will do for God’s people.

To have the announcement of an unexpected child intensified by the gift of such a weighty name must have been much more intimidating than the blinking cursor of a Word document. What to call him was no longer a question. How to raise him—and how to make sense of the mind-blowing prospect of a God-sent prophet or savior—became the more pressing problem.

Maybe I don’t wish for a name magically dropped into our laps after all.

As part of our family’s Advent practice, we borrowed this mom’s brilliant twist on a tradition and turned the traditional construction paper link chain into a Names of Jesus prayer for dinner time.

Each night the boys take turns opening one link to find a preschool-scribbled title handwritten inside: Messiah, Savior, Wonderful Counselor, Prince of Peace. Then our number-obsessed oldest leaps for the Bible to look up the Scripture verse and carefully reads the text to us.

We talk about the importance of names. Later their eyes light up whenever they hear one of the names intoned at church or in a Christmas hymn. Kids understand instinctively how names matter.

So much wonder in his names, so much potential in their promise.

Mary and Joseph probably had their own pet names for their young son (I can’t imagine yelling ROOT OF JESSE! when you’re trying to call a kid in for dinner). His friends surely gave him their own nicknames as they grew up together. So the complete list of Christ’s names would likely wind even longer than what we cut and paste together from Scripture.

But this litany of names—and Advent’s stories about strange visions announcing new babies by name—reminds me of the power of choosing what a child will be called.

Names evoke a parent’s hopes, love, and dreams. Names cannot control or define a child’s life, but they can add something rich to its direction: meaning, stories, inspiration, and connection.

Names can journey with us all life long.

My husband and I tend not to share with others the names we’ve chosen before the baby is born. Some people get annoyed with this practice, but we simply prefer to keep the choice a surprise until baby’s arrival. There’s something sacred about holding a name close to your heart and turning it over and over again until you announce it to the world.

I wonder what Mary and Joseph and Zechariah each thought when they received a mystical announcement of their child’s name.

Did they love the choice from the moment it slipped the angel’s lips? Would it never have made it onto their own mental list of possibilities? Did they have to grow into the idea just like they had to grow into the surprising prospect of parenting—one couple before they were even married, the other couple long after they thought the chance had slipped them by?

No matter their reaction, knowing their child’s name from the start of pregnancy must have helped to shape their vision of what this baby would become: one who was chosen by God and called to change the scope of human history.

What’s in a name? More than parents can ever imagine when we finally nod our heads in agreement: that’s the one.

Maybe more mystery than our choices could ever dare to dream.

How did you pick your child/children’s names? What meaning do they hold for you?

Names for an Advent Baby
Read
Lilibet, from the Perspective of One American Catholic Name Enthusiast
Read
Be Counter-cultural: Name Your Baby Mary
Read