Tour St. Peter's from the Comfort of Your Couch

There are a few places on my bucket list that I want to visit before I finally keel over. My top three places, in no specific order are the Holy Land, Greece, and of course Rome.

Until I get there, though, I will have to settle for books and videos which describe the places and plan my journey for when I get there. For couch pilgrims on a budget, I recommend a new resource from Catholic Courses called A Tour of St. Peter's Square and Basilica. 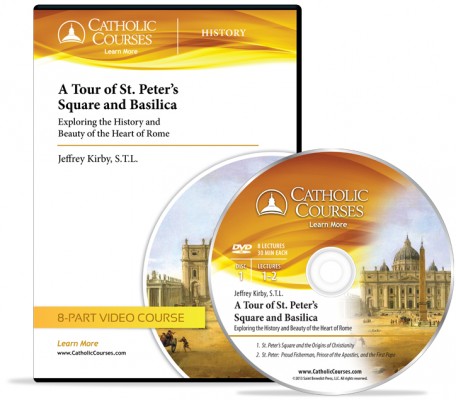 Lecture Two addresses St. Peter - the man from Scripture and his role as the Bishop of Rome and first pope.

Lectures Three and Four gives a tour of St. Peter's Square. Points of interest in the Square include the obelisk, the fountains, the Apostolic Palace, the marker where John Paul II was almost assassinated, and lastly the insertion of Mary into the square overlooking it.

Lectures Five through Eight address both the original building and the renovation of the Basilica. It also gives a tour of highlights in the Basilica including the portico which contains scenes of St. Peter's life, the Holy Doors which can only be opened by the Bishop of Rome in Jubilee Years, the nave, and the altar.

Hands down, my favorite part of this was getting to see the Basilica up close and personal. Does it beat getting to see it in person? Of course not! However, it provides a cheaper alternative (not substitute) until you can save up enough money to go see it live. I know some of my audience has had the privilege of seeing it in person and might be wondering what this DVD series would offer to them. For starters, it could be a nice stroll down memory lane if it's been a while since your trip. It also gives you angles and closer looks of things you might have missed or didn't get to see as closely as you would have liked. My least favorite part of this series was the length of each episode. Each episode was roughly 20 minutes, and I would have liked them to each be closer to 30 minutes. It seemed like just as you were getting into an episode, it was over. So whether you're a lifelong pilgrim or someone still waiting to make their first pilgrimage, you will want to pick up this Catholic Course!