A Cardinal for Haiti: Cardinal Langlois

Among the new Cardinals created on Saturday is Cardinal Chibly Langlois, of Haiti:

Nominated Bishop of Les Cayes (Haiti) by Pope Benedict XVI in August 2011, he was previously professor of Pastoral Theology at the Grand Séminaire Notre-Dame in Port-au-Prince (Haiti) and professor at the Diocesan Institute for Human Education and Promotion in Jacmel (Haiti). 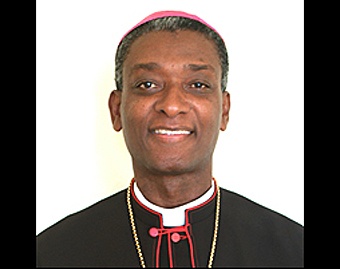 In an interview with Fides, the new (and young, only 55!) Cardinal said:

“First of all I would like to thank you for this opportunity to give voice to the Catholic Church in Haiti - in our country the faith is strong. Our local Church is grateful to the Pope for appointing a Cardinal for Haiti, a most significant act: it gives our small country a presence in the eyes of the world. The Church in Haiti lives in a constant spirit of evangelization as encouraged by the Bishops of Latin America, this means, pastoral care priorities include living and sharing the concerns of the poorest of our people, as Pope Francis has so often said. Our aim is to involve everyone in the commitment to evangelize, our young people, our priests, our bishops, our men and women religious, our families. The entire community of the faithful is called to share in this pastoral vision."

We know that Haiti continues to struggle to rebuild herself in the aftermath of the 2010 earthquake. Catholic Relief Services, who serves the poorest of the poor in Haiti, shares:

Haiti is the poorest country in the Western Hemisphere, with 80 percent of Haitians living on less than two dollars a day. Haiti's poverty is exacerbated by the needs of a large population and by political and socioeconomic instability.

The dire situation in Haiti was worsened by a 7.0-magnitude earthquake in January, 2010, which decimated the country's already decaying infrastructure. About 230,000 people died, and nearly 2 million Haitians were displaced.

So we rejoice at the creation of Cardinal Langlois and pray together with him for the important mediatory and service role of the Church in Haiti.