Dan Gonzalez loves what he does. 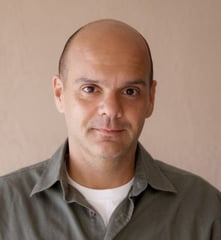 In fact, in my email exchanges with him, the thing that has most struck me is his passion and zeal for everything he does. His warmth and open friendliness is disarming and arresting. I immediately felt like I had found a friend in Dan.

When you think of artists, you probably think of paint or marble or maybe even pastels. Most people don't think of the things you see everyday on the internet or at the store.

But graphic design is a unique art in its own right. And the person who introduced me to that idea was Dan.

As the creator and designer of the MassExplained App (Part I) for iPad, Dan spent 25 years researching and developing the app. He wanted to get it exactly right because, for him, nothing was more important than faithfully telling the story of the greatest gift we have as Catholics.

I reviewed the app recently here. It is truly one of the most complete and beautiful explanations of the Mass that I have ever read. The artwork and the animation made it all come together in a way that text alone would have lost. And that synthesis is the beauty of graphic design.

I know I have. I have even seen them on my own children's backs!

And as if that wasn't enough, in addition, he is a devoted husband and father who loves to take his family camping.

Tell us about yourself in five words or less:

What sparked your interest in your artistic medium?

I remember watching HBO as a child in the 80s. Before each movie, the HBO logo would appear from outer space accompanied by a pulse-racing musical score. The three letters would spin towards the camera until the letter "O" filled the screen. The words "feature presentation" would be superimposed accompanied by whizzing lights and dramatic sound effects. I remember thinking to myself "I want to do that!" And so began my interest in computer animation, graphics and identity (logo) design.

Why do you keep producing art? What's your inspiration to continue?

The Lord is described as having created the universe "ex nihilo"—"out of nothing." I get a sense of satisfaction after creating something beautiful where there once was nothing. Well, I didn't literally create something out of nothing, the "law of conservation of matter" asserts that matter is not created or destroyed. How about this: I change white pixels to different colors so that it pleases the eye. I can live with that.

What excites you about being a visual artist? 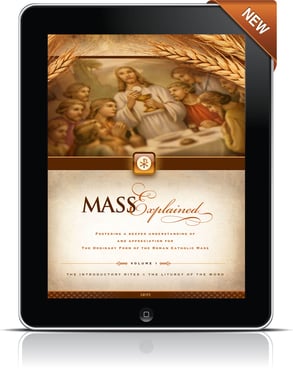 I have two types of clients: corporate and ecclesial. My favorite jobs are churchy ones! When I complete a project for a religious client, I feel a very strong sense of unity to the religious artists of the past. For a long time, visual artists were the primary conduits for conveying divine love to believers. Through stained glass windows, paintings and sculptures, artisans labored to transmit God’s message of unlimited forgiveness, healing and salvation.

In the 21st century, we've traded paint and marble for computers and pixels. I am aware that I am merely creating a logo and not painting the Sistine Chapel or sculpting the Pieta, but my desire remains as true as my predecessors’—to orient my talents toward the infinite beauty of God through the work of human hands.

What connection do you see between your artwork and your faith?

I am excited that I get to do what I love for a living. I've told my wife several times that I've never worked a day in my life! Can you imagine getting paid to draw and play with pictures, text and colors all day? I don't take this for granted one bit. I am friends with many people who really do not like their jobs but they have no choice due to family obligations. I am so fortunate that I found what I love to do at an early age and have been able to turn that into a career. I know frustrated writers, poets and painters who are tellers, waitresses and receptionists because they need to feed a family and cannot risk taking the jump. To me, it is a tragedy when gifts remain wrapped.

What's the most rewarding aspect of creating your art?

As a graphic designer, I love that I get to put a smile on people's faces and I get to be a child. I also like that my job is not a high pressure one like a firefighter, airline pilot or doctor. Their result of a "bad day on the job" vastly differs from mine.

Playing with my wife and children keeps me young and nurtures my sense of wonder, but I wouldn't consider it "spare time." I guess it would be watching Survivor, Elementary, Castle and a few other shows that have been TiVoed.

Dan's a busy guy and has many projects. Here's where you can find him on the web: