How Mothers Can Support Fathers 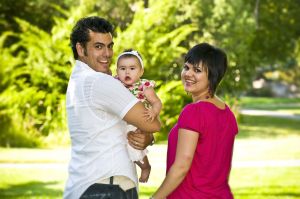 “A woman needs a man like a fish needs a bicycle.”  The first time I saw this statement was on a t-shirt with a picture of a fish on a bicycle. The woman wearing it did not seem like the type who liked men. I was in a health food store in East Lansing where I attended school at Michigan State University.  It was the Seventies, the decade when bashing or minimizing men became a sport.

Also during that time, it became acceptable for women to have babies without husbands; sometimes intentionally.  Divorce became more common at that time and fatherlessness in families began to increase.  Today, the situation has left its mark on the American family.  From the Seventies up until today, men are increasingly more absent in families and less appreciated, but their importance in the lives of their children has never changed.

According to Randy Hain, author of Journey to Heaven: A Road Map for Catholic Men, “Men in general are faced with significant challenges,” he said. “The feminization of masculinity is a well-documented and growing trend. Man’s role as head of the family is under attack and pornography is devouring men of all ages at an alarming rate.”  Hain said he felt I felt drawn to this topic for his book because he is greatly troubled by men’s situation in the world. “I am concerned that our young people, especially young Catholic men, are growing up without understanding their faith, their God-given responsibilities as men, and are being led astray by the false idols of our modern culture.”

I looked at some of the statistics on the results of fatherlessness for this article.  They are ugly. So ugly, I decided not to include them because you will either stop reading this or your stomach will hurt.  Suffice to say, however, that by every measurement, children do better in a home with a father.  Way better.

I was blessed with a wonderful father and I consider my husband to be an excellent father.  I know that by holding up my husband and father to others there will be some who feel the pain of absence.  I am sorry for that, but we cannot minimize the importance of fatherhood.  God makes up for what is lacking so by turning to him, he will help with the pain caused by absent fathers.  But without them, there is no denying there are holes.

No one person can fix this situation but moms can take care not to make the situation worse.  Women can also play a role in strengthening fatherhood.  Fathers don’t have to be perfect to make a positive impact on the home.  I’m not suggesting that children with abusive fathers are better off with those fathers. Such fathers are tragedies but even still, we should not bash the role of fatherhood because of the failings of some.  Fathers are important because when they go missing it hurts. Statistics bear that out.

Dr. David Popenoe, a noted sociologist in the field of research into fatherhood was quoted in the study, The Importance of Father in the Healthy Development of Children. "Fathers are far more than just 'second adults' in the home," he said. "Involved fathers bring positive benefits to their children that no other person is as likely to bring."  Popenoe cited one study of school-aged children that found children with good relationships with their fathers were less likely to experience depression, to exhibit disruptive behavior, or to lie and were more likely to exhibit pro-social behavior. “In addition, numerous studies have found that children who live with their fathers are more likely to have good physical and emotional health, to achieve academically, and to avoid drugs, violence, and delinquent behavior,” he said.

We cannot put a good father in everyone home, but we can respect the fathers of our children. Life is full of complexities and failings and I’m not suggesting we turn a blind eye to real problems, but I am suggesting that we find ways to build up fatherhood rather than tear it down.

It’s easy for wives to slip into the habit of complaining more than complimenting  husbands. Our children are listening. Even in families where there is divorce, bashing the children’s father hurts them in many ways.  I listened to speaker Justin Fatica with Hard as Nails Ministry once announced that we are all amazing.  A teen told Justin that his dad was not amazing because he had abandoned the family.  Justin asked the boy if he missed having his father.  The boy said yes.  “If he wasn’t amazing, you wouldn’t miss him,” Justin replied.

The more we focus on the “amazing” part of fatherhood, the more amazing everyone will begin to feel.