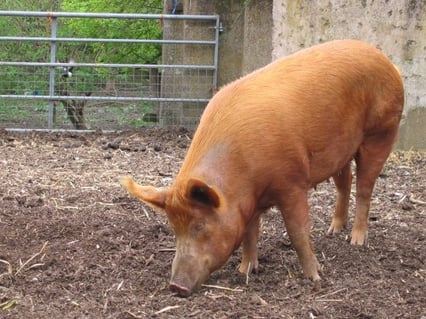 I made cornbread and bacon for breakfast, which is a big deal in our home, since the frying of bacon is always an occasion of great joy for us.  At the sound of the first sizzle in the frying pan, a trampling begins throughout the house, gaining in strength and volume as all the pattering little feet join up, like tributaries gathering into a mighty river of pre-school exuberance.  I can hear them making their way down stairs and through halls, beating their percussive and excited little way through the house to the kitchen.  It becomes a stampede as they all finally come piling in as a wiggling, giggling gaggle, and want to know:  “Watcha cookin’ Dad?”

“Oooooh, nothing much,” I’ll say in my most exaggerated, every-word-laden-with-meaning stage-voice.  “Just a little something for breakfast.”

“Maaaybe, maybe not, we’ll have to wait and see, won’t we?” I respond mysteriously, wiggling my eyebrows up and down.

That sets off “The Bacon Dance,” in which the kids bounce around like pogo-sticks while clapping their hands and shouting:  “Goodie!  Bacon!  Bacon!”

When the first wavy strips of undulating bacon joy come off the skillet the antics only intensify.  Now it’s time for the kids to attempt their best James Bond impersonation with “Operation Bacon Snatch”—but their James Bond always comes off more as Inspector Gadget than 007:  they are short on the surreptitious but long on comedy.

With sister and brother in position, the four year old then says:  “Hey Dad, look at me for a second!”

When I turn my head, the three year old makes her play, darting out a hand to grab for a fist full of savory salted pork.

With some crispy fried goodness in hand, all three scream with delight and run out of the kitchen laughing, while I call after them in mock surprise:  “Hey!  You didn’t snatch any bacon did you?  You rapscallions!”  Which makes them laugh even louder, and the one year old yells:  “BACON!”

In the end, I carry a platter to the table with whatever bacon has escaped the depredations of this marauding band of bacon crazed bandits that are my children.  There, a very careful process takes place, under intense scrutiny from the kids (who are all drooling like Pavlov’s dogs), in which I carefully weigh and measure the precious commodity with the precision of a scientific experiment to ensure that everyone gets an exactly equal share.

No such fuss is required of the cornbread or maple syrup.  That I can slop around rough and ready without exciting anyone’s sense of injury.  Not that they have anything against cornbread or syrup; they like both just fine—but they ain’t bacon.  Bacon is special.  We could use bacon as a medium of exchange in our domestic economy—our own edible Wampum.

When the serving is complete, and everyone is bellied up to the table in anticipation, we say our prayers and dig in.

On the morning in question, the Little Man devoured his bacon with special relish and rapidity.  It wasn’t long before his last piece was consumed with lip-smacking satisfaction.  His pile now completely vanished, he turned to me and asked:  “More bacon!”

He looked down at his empty tray, then over at his sister’s plate next to him, where she still had a nice little stack of bacon.

“Mia bacon!”  he declared, looking at me with an expression that said, What do you mean the bacon’s all gone?  I see some right here!

Very astute of him.  When motivated, he can exhibit impressive powers of observation and communication for a one year old (but apparently playing with toys renders him deaf, because by the time he’s done with his toys and Daddy tells him “time to clean up,” he never seems to hear).

I cleared my throat and offered clarification:  “You’re right, Little Bro, there is actually more bacon on the table, but that’s your sister’s.  We don’t have any more available for seconds.  Everyone got an equal share to start, and we can’t take someone else’s.  Why don’t you try some this yummy maple syrup?”

And then came the surprise of the morning.

Before anyone could say anything more, before the Little Man had a chance to even think about crying at the injustice of it all, his other sister—the four year old—piped up, totally unprompted and unexpectedly:  “Here you go Little Man, you can have some of my bacon,” and she handed over half of what she had left from her own share of bacon.

The way bacon is cherished by all carnivores large and small in our house, that was a real act of kindness.

I was so struck by the generosity of it that I posted the vignette on Facebook—the true mark of distinction—with the concluding line:  “No greater love hath any sister than this, that she would give up her bacon for her brother.”

It garnered some appreciative “Like’s” and “LOL’s.”

As a parent, sometimes I overlook the opportunities that come my way to praise my kids.  I’m usually pretty well attuned to problems, and ready to intervene with a “No, no, don’t do that,” when necessary, but not always so poised with praise when kudos are called for.
And certainly “No-No’s” are an important part of parenting.  But there is a “Yin” to that “Yang,” (or “Yang” to that “Yin”? I’m not sure which is which).  Praise, rightly delivered, when truly deserved, can be powerful in enticing, and leading, and confirming our children in good behavior.

I heard a great talk by Rabbi Joseph Telushkin about the transformative power that parents can unleash with a well executed use of praise.  His talk was called “How to Praise Your Child,” and there is a transcript of it on-line (it’s only a page or so and makes a quick and compelling read), and you can also see a briefer, less developed explanation of the idea which he gives in a video on YouTube.  Rabbi Telushkin’s main point is that kids generally receive the highest praise from their parents for things other than acts of kindness, which, he points out, sends a message to kids about what is really important.  If we turned that around, he argues, and gave children their highest praise for acts of virtue—like befriending an unpopular kid at school, or standing up to a bully, or sharing their bacon—it would change the way kids order virtue in their personal hierarchy of values.

Of course “No-No’s” are still necessary to circumvent problems as they arise throughout the day, but it’s also good to remember that we have another parenting tool at our disposal, and a powerful one at that.  Mother Teresa said:  "Kind words can be short and easy to speak, but their echoes are truly endless."  And the Bible tells us:  “By patience is a ruler persuaded, and a soft tongue will break a bone.”  Prv 25, 15

Best of all, it’s fun to praise our kids!  We parents can enjoy celebrating the good things our kids do just as much as our kids enjoy hearing them celebrated.  And if we keep our eyes open for it, we may just be surprised at the opportunities that will come our way to share the joy!

Books for the #girlmom: On Being Yourself
Read
Glorious Grief: Waltzing Together Through the Valley of Tears
Read
Purity, intimacy, and what about #MeToo?
Read