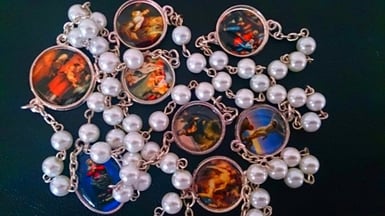 "I'll pray the Rosary of the Seven Sorrows of Mary for you," I assured a friend who had just revealed some upsetting news. "It seems appropriate."

I had never prayed the Rosary of Seven Sorrows before and didn't know anything about the devotion to Our Lady of Sorrows, but I had recently bought the special rosary because I thought it was pretty. A prompting in my heart assured me this was the right thing to do, and, determined to keep my promise, I tore open the package and read the little booklet that came with the rosary. Twenty minutes of meditating on Our Lady's sorrows each day made me realize how important this observance is not just for my friend's intentions but for all of us.

Historically, devotion to Our Lady of Sorrows began at the crucifixion as St. John stood with Mary at the foot of the Cross and comforted her, but it wasn't until Good Friday in 1239 that the practice gained in popularity. Our Lady appeared to seven holy men who lived in solitude on Mount Senario in Italy and instructed them to form an Order dedicated to her Sorrows. The men formed the Order of the Servants of Mary (or Servites) and their mission was to meditate on and propagate the Seven Sorrows of Mary. The men, all of whom are canonized saints, introduced the Chaplet (little Rosary) of the Seven Sorrows of the Blessed Virgin Mary.

In our time, Mary again appeared to chosen souls and asked one of them to revive the devotion. Our Blessed Mother began appearing to three school children in Kibeho, Rwanda on 28 November, 1981, and the apparitions officially ended on the same date in 1989.

On 3 March, 1982, Mary taught one of the visionaries, Marie-Claire Mukangango, how to pray the Rosary of the Seven Sorrows and tasked her with the mission of spreading its devotion throughout the world. Marie-Claire, who was later killed in the genocide, never travelled outside of Kibeho, but by God's grace, the efforts of this little seer continue to be used to spread the devotion. This chaplet does not replace the traditional rosary but adds to it by meditating more closely on the Sorrowful Mysteries.

In The Glories of Mary, Saint Alphonsus de Liguori wrote:

"The Blessed Virgin Mary, for the love She bore us, was willing to see Her Son sacrificied to Divine Justice by the barbarity of men. This great torment then, which Mary endured for us - a torment that was more than a thousand deaths - deserves both our compassion and our gratitude. If we can make no other return for so much love, at least let us give a few moments this day to consider the greatness of the sufferings by which Mary became the Queen of martyrs; for the sufferings of Her great martyrdom exceeded those of all the martyrs; being, in the first place, the longest in point of duration; and in the second place, the greatest in point of intensity."

The Seven Sorrows of Mary

According to Saint Alphonsus de Liguori, Our Lady of Sorrows promised the following graces to all who recite the chaplet faithfully:

Mary attached seven promises to the faithful prayer of the chaplet:

While the promises and graces are intended for those who pray the Rosary of Seven Sorrows, I am confident that my faithful prayer will help my friend. At times, the suffering of the people we care about is a martyrdom of their heart and we who support them can only accompany them in their struggle.  We may become frustrated because we may not be able to fix the problem, or correct the injustice, and we can't foresee how things will unfold. When we bring their sorrows (and ours) to our Mother and unite them with her Seven Sorrows, we stand with her in solidarity. And Mary, who will never be outdone as our Heavenly Mother will present them to Jesus and He will turn them into joy.