Communion for divorced and civilly remarried Catholics, the indissolubility of marriage, cohabitation and contraception are just a few of the many controversial topics  to be discussed when Catholic bishops from across the globe meet with Pope Francis at the Extraordinary Synod of Bishops Oct. 5-19 at the Vatican.

Ignatius Press, one of the largest religious publishers in the world, is publishing four books in the fall that will address issues of the upcoming synod.  The Catholic publisher will also have a number of authors available to comment on the topics before and during the Synod. 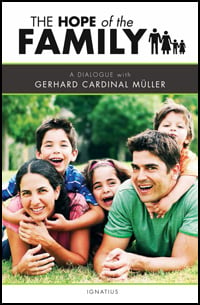 THE HOPE OF THE FAMILY: A Dialogue With Cardinal Gerhard Muller, written by Gerhardt Ludwig Muller, addresses some of the main problems with the family in the Church today — the large number of Catholics who live together before marriage, who marry civilly, or who do not even bother with marriage, as if these choices were sound options for Catholic living. In this engaging conversation, Cardinal Müller, one of Pope Francis’ top advisers in the Vatican, discusses the challenges facing marriage and family life today. The loss of faith in many traditionally Christian societies has led to a crisis. In turn, cohabitation, civil marriage, and divorce and civil remarriage, further undermine faith because they harm the family as the “domestic Church” and the place of initial evangelization. The solution, according to Cardinal Muller, is that the Church must undertake a robust new evangelization of the family — sharing the fullness of truth about marriage and family in Christ, encouraging families to worship and pray together, and helping them witness by their lives to the joy of the gospel.

Cardinal Müller stresses mercy and compassion in pastoral ministry with struggling Catholics, without contradicting the teaching of Jesus about divorce and remarriage and minimizing the power of grace to transform lives. He proclaims hope for the family rooted in the Gospel of Jesus Christ.

THE GOSPEL OF THE FAMILY: Going Beyond Cardinal Kasper’s Proposal in the Debate on Marriage, Re-Marriage and Communion in the Church, written by theologians Stephan Kampowski and J.J. Perez-Soba, critiques Cardinal Kasper’s proposal for a different approach to the issue of divorce and civil remarriage in the Catholic Church. The authors appreciate certain elements of Kasper’s proposal while criticizing some of its doctrinale, pastoral, and pastorals elements. The book is a positive contribution providing  an alternative merciful pastoral approach inspired by the Magisterium and by the testimony of Saint John Paul II, whom Pope Francis has held up to the whole Church as “the Pope of the Family.”

REMAINING IN THE TRUTH OF CHRIST: Marriage and Communion in the Catholic Church, written by Robert Dorado, O.S.A, is an in-depth response by five well-known Cardinals — Walter Brandmülle, Raymond Leo Burke, Carlo Caffarra, Velasio De Paolis, C.S., and Gerhard Ludwig Müller — and four other scholars — Dodaro, Paul Mankowski, S.J., John M. Rist and Archbishop Cyril Vasil, S.J. — to Cardinal Kasper’s proposal regarding marriage, civil re-marriage and reception of the Eucharist. The book draws on both biblical texts and early Christian writings on marriage, and shows how the Church’s longstanding fidelity to the truth of marriage is the irrevocable foundation of its mercy in its pastoral practice with civilly remarried, divorced people.

ON HUMAN LIFE: Humane Vitae, written by Pope Paul VI and rereleased featuring a new foreword from Mary Eberstadt and a new afterword from James Hitchcock, is Pope Paul VI’s explanation of why the Catholic Church rejects contraception. Paul VI referred to two aspects, or “meanings,” of human sexuality — the unitive and procreative aspects. Paul VI also warned of the consequences if contraception became widely practiced — greater infidelity in marriage, confusion regarding the nature of human sexuality and its role in society, the objectification of women for sexual pleasure, compulsive “family planning” and contraceptive policies by government, and the reduction of the human body as an instrument of human manipulation, all of which have come to pass. Other dangers such as genetic engineering and human cloning are on the horizon.

Learn more about all of these resources at Ignatius Press.