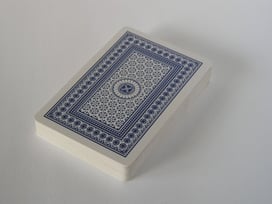 I recently posted a pro-life, anti-contraception tweet that leaked onto the screens of people who insist on separating sex from procreation.   One person commented that I was “50 cards short of a full deck” for my tweet that said:

A couple of people patiently tried to instruct me:

“If you get rid of contraception, you will get abortion x 1,000”

Another thought I must have mistyped my message.

“Wait, WHAT?! You mistyped this right? B/C until we get rid of RESTRICTIONS on contraception, we won’t get rid of abortion.”

Others got angry. One had trouble believing people thought like I did. Another tweet said if I was against contraception, then my desire to get rid of abortion was basically horse excrement.

People were very disgusted at what they perceived as my ignorance. One said:

“It's about shaming and punishing women for having sex. ‪@PattiArmstrong”

I tweeted that when contraception failed, there was an unwanted baby, which often led to abortion. I said people cared more about sex than life since abortion was acceptable but abstinence was not.

Someone told me it was BS that people cared more about sex than life and that anyone serious about life would support expanded contraception. I was also warned to keep in mind that some babies come into the world unwanted. I responded:

“Huh? Better aborted than born unwanted? Some people want those babies; some fall in love with theirs.”

A person brought up rape—I told them to stick to the subject. When I brought up self-control and God’s plan, “#sarcasm” showed up. In the end, I don’t suppose my tweets converted anyone, but I planted seeds and I’ll pray for their conversion. And understanding.

They Just Don’t Get It

Some people suggested that those who follow Catholic teaching don’t like sex. But we love it. We also respect it. We know it is a gift from God, that when misused results in consequences for individuals and society.

In 1968, Pope Paul VI, issued his prophetic encyclical, Humanae Vitae, which reiterated 2,000 years of Catholic teaching that artificial contraception is sinful. It wasn’t the case of a single, celibate, old man not wanting the rest of us to have fun when he affirmed the Christian condemnation against contraception. God had not announced a change of plans regardless of the advent of modern contraception. Thus, the Pope stayed the course. There was no mob rule at the Vatican. Nor did the conveniences of modern technology revamp God’s rules on creation.

History now shows that Pope Paul knew the score in a bigger way than anyone could have imagined.   Every Catholic needs to understand this.  We can't fight ignorance with ignorance, and fighting in this case is evangelizing.

To arm yourself for the job, I highly recommend the new book  On Human Life.  I just read it this week--after this article was already written--but I am so enthusiastic about it, I want to promote it in the biggest way possible.  I think every Catholic should read this.

Mary Eberstadt writes the introduction, summarizing sociology's discovery that sexual freedom has brought about mass discontent.  The actual encyclical Humanae Vitae is presented with history professor James Hitchcock's historical afterward.  A short and very sweet ending is given by popular author and convert, Jennifer Fulwiler.  This book is so perfectly put together on such a crucial, world-changing subject that I'm not saying you should read it, but that you must read it.   And buy copies for everyone else in your world.

Abstinence is scoffed at and abortion is preferable to self-control to so many.  Everyone knows abstinence is not easy, but some people don’t even realize it is possible.  The contraception genie is out of the bottle and has had its way with society.  And it's not pretty.

My recent tweet attacks started with a  statistically correct statement:  more contraception = more sex between people that don’t want to parent together = more unwanted pregnancies = more abortions.  And even if that one person was correct that I am 50 cards short of a full deck, it wouldn’t matter. The Catholic Church has the full truth, and it’s their deal. But we need to make some noise about it.