Sharing Christ’s Way in a Sexualized Culture, One Novel at a Time 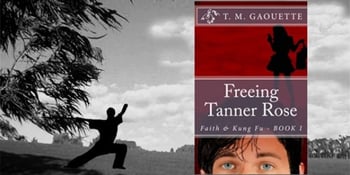 Sex sells! And we live in a culture that has embraced that truth with relish. It promotes it in every possible way: the media, fashion, movies, books, magazines, television shows, and commercials. Sex isn’t a private thing anymore, it’s far from the act that God created specifically for a husband and wife. Now it’s for anyone wishing to partake.

Of course, celebrities such as Miley Cyrus and Beyonce don’t help the cause. Performing simulated sexual acts on stage is what the former supports with indifference and the latter describes as feminism. These are performances akin to those that used to be kept secret behind the doors of a strip club. If only they would keep them in these more appropriate venues, instead of in a public forum with thousands of our children watching in awe and taking notes. No. Sex sells. And such behavior is no longer taboo.

But do you know what is taboo? Purity. Modesty. Chastity. These are just a few virtues shunned these days. They are criticized and ridiculed, as if it’s shameful to be dignified.

As a writer of Catholic fiction for teens, it’s not easy to compete. After all, Christian values are not fun. Especially for teens whose hormones are raging and who thrive on passionate scenarios they can place themselves in.

Immorality is now clad in romance, so whether it’s a gorgeous vampire or dying teens, truth is lost in the drama and sensuality. A godless world is so much more attractive these days, because anything goes. Purity? Modesty? Chastity? Really?

The culture we live in is so sexualized and so far beyond what’s considered respectable, that it’s not easy to direct young teens back to what is pure and whole and beautiful in God’s eyes. There’s no mystery anymore, even though mystery is more appealing, in my opinion. So what does a Catholic author do? Write truth! Make enticing and appealing and romantic what God intended virtues to be. Hey, I have gorgeous characters too, but their beauty radiates from within.

In the following snippet, two young characters from my novel, “The Destiny of Sunshine Ranch,” Faden and Tommy are opening up about their affection for each other.

Faden’s hair fell into his face and he brushed it away casually. “What I wanted to do was bring you here, sit quietly watching this amazing view, and break it to you that I really like you…a lot…but now I’m afraid. I’m afraid you don’t feel the same way and I’ll end up looking like a real idiot, and you know, I don’t think I want that.”

For a second Tommy felt herself stop breathing, and then she gasped for air. She wanted to tell him that she too liked him, but she didn’t know how to say it in a way that wouldn’t sound silly. And what if I faint? She didn’t realize how long she’d been standing just staring at him with exaggerated breaths before he shrugged and turned back to his horse.

“Faden, wait,” she said and rushed toward him. “Please wait.”

“Wait for what? For you to tell me that you like me too, but not in that way? And why can’t we just be friends?” He turned to her with a pained expression.

“No.” She walked toward him. “Wait for me to tell you that I like you too,” she said, standing in front of him, “and in the same way that you like me, I think.”

They stared at each other for a few seconds before he smiled and asked, “Really?”

“Really,” she said and smiled warily.

They went back to sitting beside the water. The awkwardness had returned at a much higher level, but the inevitable had to happen, and so Faden finally turned to her and asked simply, “Can I just kiss you now?” She laughed.

“I thought you were a good Christian boy.”

“Oh, I am,” he said. He lifted his right hand and tapped the silver ring on his finger with his thumb. “Pure and proud,” he said with a grin. “So don’t get fresh.” She laughed again before he leaned in and pressed a kiss onto her lips. (The Destiny of Sunshine Ranch)

In the next snippet, Gabriel from “Freeing Tanner Rose” is on a camping trip with friends and family. He’s dealing with an intoxicated Tanner who is returning after blowing them off and partying with a group of boys.

“Hey,” Tanner said. Gabriel took her firmly by the arm and led her to his mother’s tent. But when they reached it, Tanner turned to him and smiled. “What? You want me all to yourself?” she asked. Gabriel said nothing. He just turned his face away from the smell of beer and cigarettes that wafted offensively from her breath. She leaned into him and touched his face with both her hands. “Your eyes are like…crystal blue water,” she said, squinting up at him. He looked at her and then leaned down to unzip the tent. When he stood up, she held onto his arms and lifted her chin a little. “You owe me a kiss,” she said in a soft voice. “Do you want to kiss me?” Gabriel took that moment to look at her face. Her eyes were bloodshot, her makeup smudged under the eyes, and her hair a little tousled. But she was pretty.

“No,” Gabriel said firmly, and he turned her toward the tent opening and pushed her in, adding, “get inside before the bears smell you.” (Freeing Tanner Rose)

In my novels purity, modesty, and chastity are attractive, along with the many other virtues embraced by the Christian faith. In my novels it’s purity that’s enticing and modesty that’s all the rage. And when a handsome young boy is nonchalant about not dating until he’s ready to get married, well, that’s so refreshing and unique that it makes the moment surprisingly dreamy.

Sex may sell, and a lot more than chastity, at least for now, but I pray that the latter reclaims its rightful place in the lives of our children.

That’s my goal, in each of my stories, sharing Christ’s way, the right way, one novel at a time.

“By the end, the story-telling becomes quite powerful, and, I think, that many will find this to be a book that will stay with them for quite some time…This is a book young people will enjoy, and the occasional adult. No, I don’t think good apologetics means good story-telling, but there is enough of each in ‘Sunshine Ranch’ to make it both interesting and edifying for young readers.” (Catholic Review of Books)

T.M. Gaouette is the author of the young adult novels The Destiny of Sunshine Ranch and Freeing Tanner Rose. She is a devoted Catholic, wife, and home-schooling mom of four. Learn more about her upcoming novels at tmgaouette.com and stay in touch with her on Facebook, Twitter, and Google+.