What the Christmas Pageant Is All About

Baby Jesus wore a blue snowsuit with a faux-fur-trimmed hood.
All the Angels had puffy coats under their robes.
The Shepherds sported blue jeans and white Nikes. 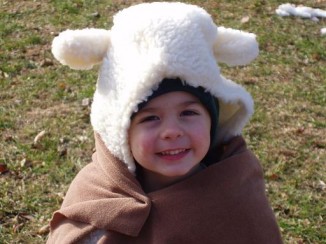 Mary had a kidney transplant three weeks ago.
The Sheep was played by a three-year-old boy who had to be persuaded to take off the Eagles hat underneath his furry-eared cap.
Due to a shortage of teenage boys, there were almost Two Kings instead of Three.

Mary’s pony stopped along the path to Bethlehem to graze on some leftover autumn leaves.
The goat butted the Shepherds and the Sheep.
Most of the choir members had colds and couldn’t sing.
We were right next to a Dumpster.

It was a beautiful sunny day.
There were so many people we didn’t have enough chairs--but there were plenty of cookies and gallons of hot cocoa.
All the children played their parts wonderfully.
The pastor sang with the choir, and at the end everyone sang “Joy to the World.”