An Interview with The Culture Project 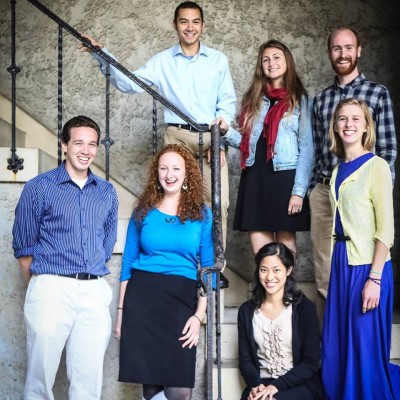 "The glory of God is man fully alive," St Ireneous tells us.

And a new group of young missionary men and women are traversing the world to proclaim it.  They are seeking to engage and restore the culture by sharing with young people in high schools, middle schools, and colleges that each person has dignity and deserves all the riches of a life of sexual integrity.

I had to beautiful opportunity to interview one of these missionaries, my son Tom Costello, while he was home on Christmas break.

How did you find out about the work of the Culture Project, Tom?

Tom: Ever since college I have been inspired to share the faith with others through word and through action. After graduating, I did year of teaching.  It was a good year but afterward, I felt God was calling me to do something different.  At around the same time that I was searching for God's will, I connected with some friends from college who were in this mission called The Culture Project.  I visited the organization in Philadelphia and was struck by the contagious joy in this community founded by love and I was really drawn to that. So it was the community and  the message they were sharing as well, that drew me. And I love doing what I am

What was involved in the training process for being a missionary?

Tom:  A big part of the training process was  the practicing of talks.  This is because we know that our faith, articulated well, with love and with joy, is very attractive to people.  And even before we began practicing our talks we did a week of retreat.  This was a week of prayer and  reflection because we knew that hardships might be facing us, that we are up against  a culture that gives many lies and counterfeits to true love. So prayer first, then practicing our talks and critiquing them so that by the end of training we were well prepared to go out into the deep and try to be fishers of men, to catch souls.

How is the organization set up as far as which missionaries go where?

Tom:  The Culture Project is based in Philadelphia, PA where there is an administrative office with support staff  and a recruiting team. Additionally, there are three teams of missionaries that speak about Sexual Integrity and Human Dignity.  There is a team at the home base in Philadelphia, a team that splits the year between Los Angeles and New York and then a US travel team that I am on.  Ours is a team of seven: three ladies and four men.  I really enjoy the team dynamic- the brotherhood with the male team members and the sisterhood with the women.  As a team we pray, sacrifice for each other, and are committed to our team mission  to lead others to Christ, and we do all this in the special way of community living.

What cities have you traveled to so far this year?  Where are you  headed?

Tom: The whole organization began with training on  Long Island, NY .  Then, we traveled to  Philadelphia where we started with  some pro -life evangelization. Then the seven of us on the US Travel team caravanned west. We have given talks  in western Pennsylvania-  at State College, Pittsburg,  and Erie, PA.  Moving on to Toledo Ohio,  we worked for that diocese until Christmas.  After the break, we are headed to Orlando FL to begin our mission again.    We will be visiting lots of cites in Florida, Venice and Miami included.  Then, we travel to Austin TX in March.

What are some of the main messages you share with young people today?

Tom: One of main messages we want to get across is that because we are created by God we are called to be loved but also to love others. Our talks take a unique approach in that we often split the men and women.  To men we emphasize the  message that they have strength-  that they are called to protect and to serve.  This is what leads us to become fully alive. To the ladies, our message is that because they are beautiful and enough, they are so worthy of sacrifice! We stress the idea that being loved and loving is a universal call, not just religious or political one, and that this will lead us to fulfillment and happiness.

How have your talks been received?  How are the young people responding?

Tom:  The majority of students are receptive to the message.When they are open,  and people hear the truth in a joyful manner then that gives them a motivation to strive toward it and work toward that goal After one of my first talks,  a student was walking out door,  and he said  I had given a good talk, and then said "I think you changed my mind about a few things."  I was amazed and grateful for his honesty and talked to him afterwards and it was a  great experience to see God working in his heart.

What is the most rewarding aspect of the work for you personally?

Tom: Seeing young people light up when they hear about the message that they are called to greatness. They have misconceptions about what they think we are going to say and when we tell them they are are created good,  and called to greatness to become fully alive , you see something inside them that is burning for something more.

What are the greatest challenges?

Tom: Hearing the stories of students who are in despair or have lost hope.  A teammate of mine was giving a talk to 7th grade girls and before she even started talking, their hands went up and and they began telling her about crude jokes the boys had been telling them. This broke my teammate's heart. We believe and we know there is hope and that true love does exist out there and that it is something to fight for and something to live for.

How can people get in touch with the Culture Project?  How can they follow what the missionaries are doing?

Tom: One of the best ways to get in touch with us or follow what we are doing is to go to out website www.restoreculture.com where we have resources and a blog from our missionaries. There is information about the many different topics we address.  That is where you can find out what The Culture Project mission us up to!

Thank you, Tom, for sharing and for your answering to God's call.  God bless you as you continue on your mission.

Cindy Costello is a praying wife and mom who is settling into her empty nest. More than fall trees and caramel lattes, she loves a pen hitting paper to create something unique and beautiful for God. Cindy is challenging herself intellectually and getting ready for Career #2 by pursuing a MA in Theology. And on the side she gives parish talks and retreats , specializing in Theology of the Body and all things Catholic! Visit her website at CindyACostello.com.