When "Stuff" is for Dinner 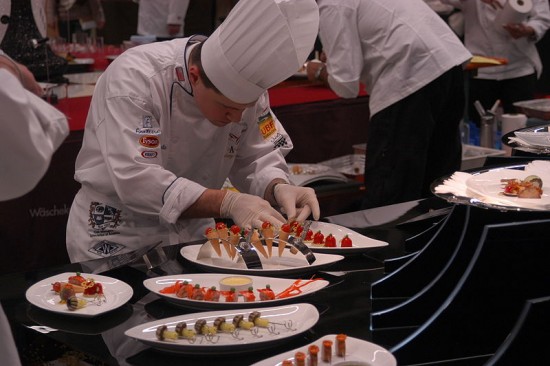 My Mom can cook.  I mean flat out cook.  To me, the real test of gourmand greatness isn’t concocting exotic dishes from strange recipes that call for ingredients you’ve never heard of before, utilizing specialty gadgets that can perform only one, arcane function—like maybe zesting a cumquat—and otherwise sit idle for years on end (I mean, how often do you need to zest a cumquat?).

No, for me the real test of mastery over the culinary arts is walking into a kitchen that’s a little small, a little short on cabinet space, and then using your one free hand (because the other is holding a baby) to open a cupboard and see what’s there—because you really don’t know anymore, what with a week of breakfasts, lunches, dinners, afternoon snacks, evening snacks, and all the unauthorized kitchen raids made by your teeming progeny in the five days since your last excursion to the local Bottom Dollar Grocery—knowing that you are going to make dinner, and you’re going to make it with whatever you happen to find in that cupboard, whatever it may or may not be.

The chef in true communion with the Cooking Muse will quickly cast a practiced eye over the contents of the cupboard, and within minutes be able to start whipping up a fabulous meal—for ten—from the odds and ends she happens to find therein.  All using pots and pans that are a little worse for wear as a result of their frequent forays into the realm of the sandbox.

And without the spatula, which has turned up missing again.

While simultaneously entertaining a gaggle of children who are idly standing around that slightly too small kitchen constantly asking, “What’s for dinner?”  To which the Master Chef replies:  “I’m not sure yet.” One of the fun things of this kind of ‘Cooking-in-the-Wild’ is that the meal plan remains a mystery to all involved—even the chef—until the cooking gets going.

But creative ideas for the evolving meal begin to coalesce and take shape in the Master Chef’s mind as she continues her inexorable march to dinner, slowed only by the little arms which occasionally wrap her legs in a hug.

Now, if you can make great food in those conditions, you know that you can cook.  And my Mom was a world class champion of that sort of broken-field cooking.  Some of her more famous on-the-fly, made-up-at-the-drop-of-a-hat dinners included things like “Wagon Wheel Casserole” (the naming of these never-before-seen-by-man meals was an integral part of their appeal).  Wagon Wheel Casserole was a baked bean, hotdog, tater-tot kind of thing, wherein the hotdogs were arranged in the circular casserole dish in the shape of wheel spokes and rim, hence the name.  All professional chefs know that “plating”—final presentation to the customer—is a huge part of success.  First impressions are critical, and a wagon wheel shape is a big hit with the ten and under crowd.

Another famous improv dinner was “Stuff.”  I know, that seems to violate the plating rule about giving new foods kid-friendly names, but “Stuff” was so good it could stand on its own even with a somewhat dubious name—although it did sound a bit like a comedy routine when we asked Mom, “What’s for dinner?” and she answered:  “Stuff.”

“What kind of stuff?”

“We’re having stuff for dinner?”

When Mom presented the ambiguously monikered “Stuff,” we eyed it suspiciously.  But the subtle, complicated aroma wafting from it’s indeterminate form was inviting—even tantalizing—and we were drawn to plumb its hidden mysteries with our eager forks.  And when we did, we were won over by the unique flavor experience of Stuff.

We ate it all, and were licking our plates clean when the last bite of Stuff was gone.  I still don’t know what it was—a cornbread, goulash, meat-loafy hybrid—but it was good.

Unfortunately, Mom didn’t know what it was either.  It was so good, we asked her, “Mom, can we have Stuff again?”

“No, I’m afraid not,” she answered.  “I don’t know exactly how I made it or what I put into it—I didn’t write it down as I went, and I don’t think I could recreate it again.”

And so the secret of Stuff has been lost to history, and Stuff, like ancient Camelot, has receded into the misty land of legend (and bad 60’s musicals).  Never again will the culinary world know the wonder of Stuff, and no matter how I may long to savor Stuff again, my taste buds shall never again tingle with its tantalizing, if unknown, essence.  It was one of those things where you just had to be there, at the right place at the right time, and enjoy it while you could, because it will never come again.

We certainly need to think ahead, plan, set goals, be prudent, marshal our resources, and all the rest.  Those things are necessary to dreaming big dreams, the kind that are worth chasing after, and then working to make those dreams a reality.  It’s just good to keep our eyes open for the things God sends our way while we’re busy doing our chasing.  Some of life’s best meals come when we aren’t following our recipes, and some of life’s best moments come when we aren’t following our scripts.  That’s when we are dining at God’s roadside canteen, where the food is always spicy, and following God’s storyline instead of our own—and that is always a lot more interesting—and fun—than what we write on our own.