Heaven Without Music Would Be Boring

Just a few weeks ago we heard the Transfiguration of Jesus. As Jesus' robes became a dazzling white, Peter piped up with the idea that they should erect three booths or towers to memorialize the event of Moses, Elijah, and Jesus coming together. God's presence overshadowed them, the voice of the Father was heard, and then suddenly all vanished except for Jesus, who seemed to be as normal again. 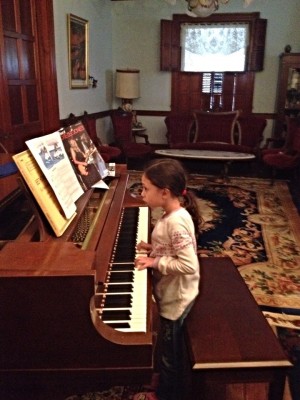 My daughter has been struggling with taking up the piano again after an almost 2-year break in the cycle. So much has happened during that time. She is in a different school and a different house. She plays on a different piano with a different teacher. And suddenly, what was once the adventurous joy of exploring her first musical instrument has become a skeptical attitude about sharps and flats and an insistence on playing piano with only one hand.

So we talk. So I listen. Do you still like the piano or do you want to try a different instrument? Are you having trouble with the new teacher? Is the issue when you have piano lessons? Are you too busy? The list goes on and on.

In having such a heart-to-heart with an adult or your own self, it would be difficult enough to separate honesty from agenda (or recrimination from self-criticism). Talking to an 8-year-old is an even more delicate task. Personally, it would be a devastating thing for me to countenance that my daughter hated music, hated the piano, and had no interest in ever being able to play anything other than an electronic device.

I realize parents have all kinds of wishes for their kids and not all of them come to fruition. My parents probably wanted me to follow in their footsteps and become a doctor. So I get it. But having to deal with the disappointment of having a tone-deaf daughter figuratively or literally, that would really hurt. And of course that's my issue and my agenda.

Stepping back a moment, so as not to be too Peter-like in the mix, it's also true that this "piano issue" was causing all kinds of strife in the home. My daughter would start practicing and then get frustrated when she got to a hard part. She'd start getting angry at the piano. I would try to help her out. If that didn't work, she'd be angry at me or I'd get angry at her for not listening to me. This cycle repeated itself over and over again until my wife declared, "That's it. No more piano lessons."

And for a moment, that hung there like an erected tower. But nobody told the piano teacher and more importantly, no one had yet gotten to the heart of the matter. How did we get from piano/music was fun to piano/music was not fun? And separately, but related, what can we do so that we aren't fighting so much?

When I broached the issue again several days later after another flare-up, I reminded my daughter that no matter what, we shouldn't fight. Let's start there. In fact, Mom was upstairs with a headache and it upsets her when we fight over the piano. So we talked quietly. Occasionally my daughter would tear up or furl her eyebrows.

My daughter went on to explain why she got frustrated this time around. She explained that she was used to taking direction from her teacher. Her teacher physically helped her by placing her hands in the correct starting position, etc. When I tried to help her, I didn't do that. Ok, she didn't ask me too and I didn't know that I should, but I had always expected her to be able to read the notes and do that independently. (Ironic. It's not the teacher...it's me!)

As we continued our dialogue like this, I stressed again that no one is mad. We don't have to fight. I really wanted to hear what's wrong. Calmer heads prevailed. I discovered that my daughter really struggles to play with both hands. But she was able to pinpoint exactly what piece she was able to get up to and what piece was just too hard for her to play.

So we stopped and I examined the music. And immediately it became clear. She's at the point where the left hand is more about keeping the beat, which is common to a lot of popular contemporary children's music. She gets confused and frustrated when the left hand starts "talking to the right hand" more and more, as it does in even the simpler pieces of classical music.

I could go on and on about living in a push-button world where my daughter can do so many things in Minecraft or through her iTouch with the simplest of moves. Not so in the world of acoustic instruments. I could wonder aloud about whether our "ear for music" has changed so that we are less enthralled about the moments of flourish in classical music "and all about the bass" today. Or maybe I was so "tone deaf" when I was a child, I just played what was in front of me because it was the only music that I would ever hear in my house.

But that's my end of the telescope.

My daughter was transfigured that day from a frustrated, angry girl, to one who was afraid of what the future held for her in the presence of a disappointed and frustrated parent, finally, to beholding clearly just who she was, now. And I experienced a glimmer of "what to rise from the dead" could mean. (Not to mention the voice of the Father saying, "This is my beloved child! Listen to her!")

That moment was a fleeting tower raised up. Once there was a time when music was adventure and possibility and no anger clouded the sky. Then there was fear of disappointment, frustration and failure. Now, skies have cleared and the horizon is endless yet again.

To Ponder:
When was the last time you had a chance just to sit and listen deeply to someone in order to really hear them?
Did this help you behold that person more clearly? Were they transfigured?
What did you hear?