The Chronicles of Narnia

The Chronicles of Narnia is one of the first series I remember reading as a child. I know I read other secular series, like Boxcar Children, Goosebumps, etc. However, none of them stuck with me the way this series has. Perhaps, it was because I played Edmund in a school production of it. Yes, I'm always typecast as the jerk. :) Perhaps, it was because the allegory of Aslan being Jesus hit me over the head and was something I at my young age could grasp. I'm not really sure the reason. I just know I still love this series. I love it so much that my paperbacks have cracked spines. If you know me, cracked spines are not something I love (unlike my lovely wife). Therefore, I have been investigating different editions (both text and audio) of this wonderful series. 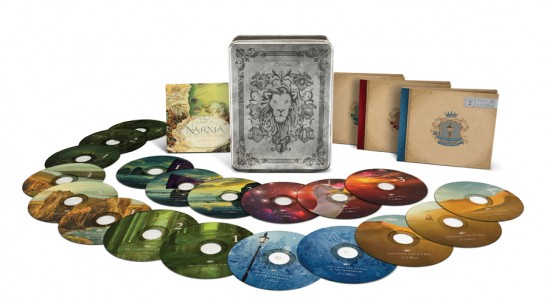 The first one I tried was the audio version edition produced by Focus on the Family's Radio Theatre. When I received this product, I didn't realize that it was the dramatized version. That means that the text is more or less the same. There is a narrator, but more often than not, the character will exclaim something rather than have the narrator tell what the character is feeling or doing. For example, when Lucy was walking through the wardrobe and was crunching on snow, instead of having the narrator describe to us what she was thinking, Lucy directly tells us what she is thinking. If you want just the books, you will probably hate that it is dramatized; if it is not a deal breaker, then it is the best dramatization I have heard, even better than the BBC one. What makes the dramatization so good? I attribute it to the cast of characters. When you have that many voices in a story, it helps to have a whole cast of people instead of one person trying to do every voice. There are also music and background noises that add to the story. I  must admit that these can be a bit overpowering at times. If you listen to the first five to ten minutes of The Lion, The Witch, and the Wardrobe it drowns out the four children's conversation a bit.

What really impressed me about this CD set is the packaging. For starters, it is in a nice sturdy tin with Aslan front and center on it. Next, there are seven separate sleeves for each of the books. Each sleeve gives the date of publication and the order in the series, which the book is to be read following the chronological approach. With each book being in separate sleeves, you can choose to listen to the books in the original publication order, and expose your children to Narnia the way you were originally exposed to it. Also on the sleeves are shields representing some facet of the particular book, like a lamppost for The Lion, The Witch, and the Wardrobe. The CDs themselves also look like works of art, and each one is unique looking. Lastly, there is a folded-up map of Narnia included in this package. So if you are looking for an audiobook version of The Chronicles of Narnia and don't mind that it is dramatized, this is a beautiful edition to own. If you are looking for an unabridged audiobook version, then you'll have to buy Harper Collins' edition. 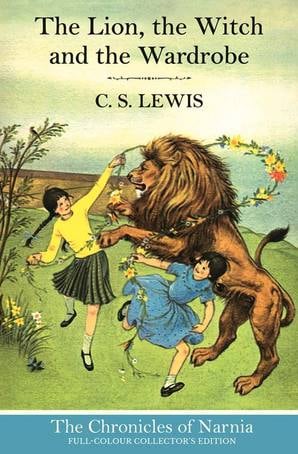 After looking at audio editions. I turned my attention to the text versions. There are several different versions available, depending on whether you want individual volumes or a treasury of them all in one book. Part of me was tempted to go for the treasury, because it was a hardcover, and I am a sucker for hardcovers! However, I didn't like the fact that since it was one volume, it was prearranged into the chronological order and not the published order. It's a minor pet peeve, but it almost forces you to read them in a specific order, and you shouldn't be shoved into an order you don't prefer.

The edition that I ultimately settled on were the full-color collector's editions from Harper Collins. They come in paperback in the United States, but if you want them in hardcover, you can buy them from an Amazon seller or Amazon UK. These are the best editions, I have discovered. The illustrations are original Pauline Baynes illustrations. She also illustrated for Tolkien, so she is definitely my favorite illustrator. I remember being enchanted with her black-and-white illustrations when I first read this book, but adding color to these pages makes them all the more vibrant. The pages are a thick, glossy paper that feel like they are built to last. The books themselves also have a nice weight to them, and the covers are just as beautiful as the illustrations on the inside. And even though these books are numbered chronologically on the spine, I can give them to my son in the order I choose to (which is publication order), and let him read them the original way the first time. After that, if he wants to read them in the chronological order he can. But he will at least have had the chance to experience the Narnia magic the correct way first.

Well, these are my recommendations for Narnia books, both audio and text. What are your favorite editions and why?

When you purchase these books through any of the affiliate links in this post, you support the work we do at CatholicMom.com at no extra cost to you!