On June 18, 2015, Pope Francis issued his second encyclical entitled Laudato Si. It didn't take long before it was read, analyzed, and criticized from non-Catholics and Catholics alike. Depending on your agenda dictates how you read anything, and this is especially true of this encyclical. I've seen a lot of people completely hone in on the environmental issues, while ignoring the pope's discussion on human ecology and the dignity of all human life. On the other side of the debate, you have people declaring Pope Francis the "Green Pope," and completely ignoring the fact that his predecessor, Pope Benedict XVI, spoke and wrote on the environment and human ecology. Let's also not forget that Ecumenical Patriarch Bartholomew I (the original Green Patriarch) has also written on these issues extensively. 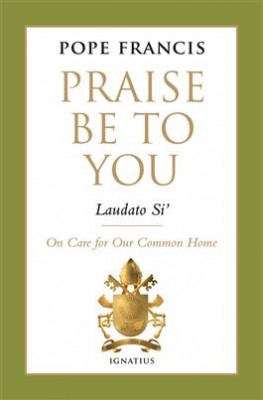 But before you can decide how you feel on the latest encyclical, you're going to have to read it! There are several options available to you, including the old standard of reading it on the Vatican's website or downloading it to a PDF and reading it that way. That may work for people of my generation who have wholeheartedly embraced technology, but I spend enough time on a computer for work. I don't want to stare at one to read these 40,000+ words of the Pope's. Instead, I am going to wait for it to come out in print. Again, you have several options here as there are several publishers printing it in book format. I personally am waiting for the edition from Ignatius Press! It's a couple bucks more than other editions, but it's a beautiful hardcover edition. Take it from someone who owns ALL the Ignatius Press encyclicals. They are quality books. (Now, if only they would print all of Pope John Paul II's encyclicals in one nice volume. But that's a plea for another date.) Pre-order this edition from Ignatius Press now, and when it's available in their warehouse (August 2015), you'll be one of the first to receive it! Until then, check out this video below.