The Economics of Faith 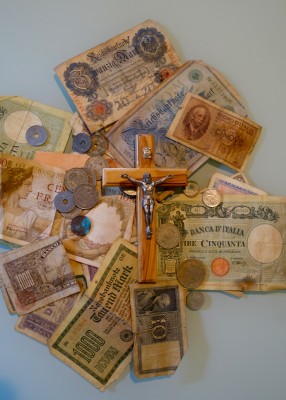 Russ Roberts, a professor of Economics, conducts interviews each week with experts in a variety of fields in his podcast EconTalk. Economics is often the topic, but just as often, the subject at hand is seemingly unrelated.

Such was the case with an interview he conducted last year with the late D.G. Myers. The topic was Cancer, Dying and Living. In the interview, Myers, a critic and literary historian describes his terminal cancer as a mercy from God. How can being stricken with cancer be merciful?

Confronted with the diagnosis, Myers found himself applying simple economic principles to his life. Days were suddenly in short supply, while his demand for life increased. How to spend each day became a critical economic decision.

Roberts and Myers  spent some time discussing the concept of opportunity cost. It’s what a choice costs you in terms of what you give up to make that choice. For example, if I buy a car this year, I may not be able to afford the vacation I was planning. If I do either, I forgo the opportunity to invest that money for the future.

Myers now applied opportunity cost analysis to the simplest of life decisions. Aware of how short his life was likely to be, he realized that any project that he worked on robbed him of the opportunity to do something else. He abandoned a literary history he had begun because he no longer wanted to engage in the type of reading he would have to do for research.

Myers began to read more for his own pleasure and write more about his personal experiences. As a result, in his final years, he felt he had become more influential as a writer and critic than he would have otherwise been.

During the hour long conversation with Roberts, D.G. Myers is very frank and unsentimental about his life, impending death and his cancer. His meditation on the meaning and potential blessing of his illness came out of his experience as a religious Jew. Reconciling his experience to his faith became a framework for coping with his situation.

After listening to the interview, it occurred to me that economic principles apply not only to life, but to faith itself. There are three ways I think this can be illustrated.

First is faith in its broadest sense. Faith has an opportunity cost. What I choose to believe precludes me from believing a host of other things. In embracing my Catholic faith, for example, I am rejecting much of what is taught in Judaism, Islam, and Buddhism. I also reject some of teachings of other Christian denominations.

One’s faith (atheists included) has a social cost as well. Living as a Catholic in central California is not particularly difficult, but we live in a society that seems to more hostile to religion than it was a decade ago. Indeed, there are places in the world where the open practice of my faith would be a death sentence.

Secondly, how I engage my faith has economic implications.

For example, a few years ago, I committed to saying the rosary on a daily basis. Since then, every day is shaped by that commitment. Every week is shaped by my commitment to attend Sunday Mass. That means that planning vacations and weekend trips must include the opportunity to attend Mass. These are not examples of great sacrifice, but they are practical examples of opportunity cost applied to the exercise of faith.

Ongoing examination of faith and conscience pushes me to consider how I deal with family, how I engage in business and my responsibility to the poor. When making economic decisions, I am now more focused on the ultimate cost of things rather than mere price. For example, I recently had to hire a contractor to do some work on our home. Twenty years ago, I would have focused only on the price of getting the work done. Price was still a factor, but this time around I was also focused on the contractor’s reputation for working with vendors, subcontractors and employees. As the work progresses, I find that I am happier knowing that the workers coming into my home are working under decent conditions and being fairly compensated.

Thirdly, let’s consider how Jesus himself uses economic principles to describe God’s kingdom and His relationship with man.

One of the most difficult passages in the Gospels is the Parable of the Vineyard. In this parable, a landowner goes out early one morning to hire workers. He offers them a set wage for the day, and they accept. The landowner goes out several times throughout the day, finding others who wish to work into the late afternoon. At the end of the day, he instructs his foreman to pay all the workers a full day’s wage, beginning with the last ones hired. Those hired early in the day grumbled that it was unfair that those who had only worked an hour or two be paid the same as those who had toiled all day.

The landowner replied that he was treating them fairly because they had agreed upon their wage in advance. He went on to ask them if he was not free to do what he wished with his money and if they were not jealous of his generosity to the others.

I think people find this passage difficult because the landowners actions run counter to our sense of fairness. Since the landowner clearly symbolizes God, the story is even more unsettling. Jesus seems to be warning us God’s idea of justice might not be the same as ours.

In Luke 15, Jesus tells three stories with economic themes: The Parable of the Lost Sheep, The Parable of the Lost Coin, and perhaps the most famous of all Parables, The Prodigal Son. The story resonates with even the non-religious among us with its themes of greed, jealousy and sibling conflict. Jesus is clearly talking about salvation in this story, warning us that it will be extended to not only the righteous, but to those who have strayed from faith and come back to God with contrition.

Is it coincidence that these parables and so many others are organized along principles of economics? Of course not. I would also argue that these stories are not simply allegory. I think that they are they are carefully chosen examples of how the physical and spiritual words are aligned. It seems to me that many economic laws are natural laws. They are practical guidelines about how to engage both creation and humanity.

Take the landowner, for instance. He is doing as Jesus commands and is caring for the poor. (Remember, he continues to go out throughout the day, expressing dismay that there are still men that have not found work ) His willingness to pay a full day’s wage for a partial day’s work ignores the law of supply and demand. ( With the scarcity of work, he could have easily pitted the laborers against each other for lower wages.) Instead he uses his vineyard as vehicle to bestow his generosity on others. One could argue that his actions were not fair, but they were just.

In the story of the Prodigal Son, The father makes what seems to be a poor estate-planning decision. He gave his younger son his portion of the estate. After the son squanders what he has been given, he returns and is welcomed back by his father.

This forgiveness is resented by the older brother who has always been obedient. The father chastises him, saying, “My son, you are here with me always; everything I have is yours.” This is a hard reading because, at a practical level, the father’s actions seem foolish and the older son’s resentment is understandable. One of the many lessons to be learned from this story is that neither son understood the true cost of their respective decisions about how to handle their inheritance.

If I may be allowed to stretch this analysis just a bit, I will venture to say Jesus does not seem does not seem in favor of heavy regulation. The landowner asserts his right to do as he wishes with his money. And, let’s face it,  modern labor laws would have prevented him from making the last first and the first last.

The father in the Parable of the Prodigal Son could have easily restricted his son’s access to his inheritance but instead allowed him to choose freely. Just as God’s grace is freely given but never forced.

Elsewhere (Mark 8, Luke 9 and Matthew 16),  Jesus gives us the ultimate example of opportunity cost. “What profit would there be for one to gain the whole world and forfeit his life?”