Review of When Calls the Heart: "Trials of the Heart" DVD 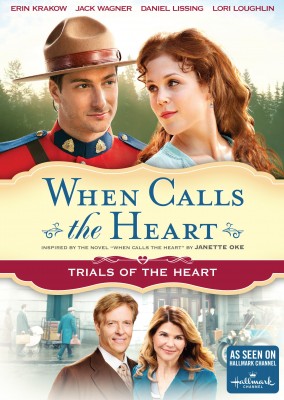 As Season 2 progresses, the Hallmark Channel's film series based on Janette Oke's book series develops with more characters and closer relationships among the main ones. Elizabeth Thatcher, a strong-willed teacher from the city, continues to fall in love with her new town of Coal Valley and its community. Her love interest, a handsome Mountie named Jack, still catches her eye as they spend more time together and get to know more about each other.

When her mother becomes ill, Elizabeth must journey home to Hamilton with an insistent Jack as her escort. Jack and Elizabeth open up to one another during the experience as they are met with obstacles such as former suitor Charles Kensington and Elizabeth's father, William. William discourages Jack from pursuing a serious relationship with Elizabeth, persisting that Charles is better for her. A side story of Abigail going to trial over the wrongdoing of the mine explosion is finalized as well.

The characters develop deeper relationships, and love and faith are softly the base of the story. There is concern, sacrifice, forgiveness, and unending love. This series is based on true love and Christian values where one can relate and connect to the characters' stories.

The plot is attention-getting and this movie can be enjoyed by men, women, and families.

When obstacles are placed in the way of what the characters want, they rely on God and their faith to help them through. Where do you turn in times of struggle?