A Rich Tapestry of Faith: How St. Kateri Rescued My Family's Catholic Identity

I absolutely love reading conversion stories. Each is unique and inspiring, and as a cradle Catholic who lacks such a dramatic story of her own, I seek them out at every opportunity. I own a large collection of memoirs written by converts, and I reread them often.

In a sense, however, even cradle Catholics have to make their faith their own as adults in order for it to “stick.” I, like everybody, have my own story of faith, and foundational to that is the story of my family. It is because of my parents’ example that I remain Catholic, but that came about as the result of a somewhat circuitous journey...

My mom is Italian, and her immediate and extended family were, during her childhood, all Catholic. My native Western New York is, in fact, full of the descendants of Italian and Polish immigrants, and we have many beautiful, historic churches to show for it.

My dad is of German and indigenous descent, specifically Mohawk. Growing up, he was raised nominally Protestant. My dad and his siblings were baptized in a Lutheran church, but the family never attended with any regularity. Through the years, he recalls belonging to a slew of different churches, noting with amusement that his membership usually had to do with their baseball team.

The result of all of this is that when I was a little girl, my dad did not regularly attend Mass with us. My mom had retained her childhood Catholic faith, and she and my dad were married in the Church, but the raising of my sisters and I in the faith fell to her. It is interesting to me that my older sister recalls us attending Mass fairly frequently when we were growing up, but I do not. I remember attending on Christmas and Easter, which is also when my dad would come with us. But what I DO remember are the religious education classes.

Cradle Catholics out there who attended public school, and thus needed to attend weekly religious education in order to receive your sacraments, let us all band together, yes?! I am hoping that some of you had a positive experience in religious education, but I unfortunately did not, mostly because I put zero effort into it. My recollection? Absolutely excruciating. I remember sitting in those classes, watching the clock, my mind wandering every which way, and just waiting for them to be over. I did not see the relevance of these classes to anything else in my life. I had a strong belief in God, but what the catechists were trying to teach us each week seemed far removed from the way I thought about God.

I never doubted that God was there, I just wished that I did not have to sit through those classes each week. It did not help that we lacked observance of any Catholic traditions in our home, and I did not really understand how being Catholic was different from being any other kind of Christian. Definition of Protestantism vs. Catholicism? I had no clue. The Catholic faith did not seem profound, meaningful, or distinctive in any way to me. I figured all belief in God was similar, and that it did not matter.

This continued until I received the Sacrament of Confirmation in early high school. Then something changed. One of my aunts joined a prayer group and invited us to come. This touched a need within my mom’s heart, and she, my sisters, and I started attending. From that point forward, the fellowship, prayer, and spiritual support moved my mom to more fully embrace her Catholic faith. We started going to Mass every Sunday and praying the rosary. Even I enjoyed the prayer group. The ladies were fun! And a few of my cousins were there, too.

By this point, much of my mom's family had left the Church. They all remain devoted Christians, but none remained Catholic. The temptation for us to fall away was right there, very strong, and I am ever so grateful that we remained.

With our renewed Mass and prayer group attendance, my dad started to see how important this had become to us. One day, something extremely fortuitous happened: while reading the newspaper, he saw an article about a brand-new local parish, one that is completely unique in our state in that it is housed on Native American land. This sparked his interest due to his own Mohawk heritage. He showed the article to my mom, and they agreed to go to Mass there.

This church is absolutely adorable and quaint. Very cozy, and decorated in indigenous art, it is a beacon of the faith amongst people who may not have otherwise considered a Catholic church. Based on my impression and experience, this is a very sensitive issue amongst indigenous people, and understandably so. The past is rife with heavy-handed (and worse) tactics to mold Native Americans into what the larger society would rather have them do, and as you can imagine, this type of persuasion is not very effective. Generally speaking, Native people have a strong belief in God, but Christianity is not usually their chosen path.

Thus, this parish is especially meaningful in an area with a relatively large Native American population. My dad is a very quiet and reserved man. He did not say much at the time, but he wanted to keep attending Mass there, and this spoke volumes. So we did.

A year or two later, my dad confided that he would like to receive instruction toward becoming Catholic. After nearly twenty-five years of marriage, my dad entered the Church at the Easter Vigil, and he and my mom were finally united in faith.

I remember the Mass when he was received into the Church quite well, and we were all under the impression that his chosen patron saint was St. Andrew, as that was his own grandfather’s name. When he went forward to receive the Sacrament of Confirmation, and Father asked him to name his saint, he said:

It was one of those moments that is so unexpected, but yet makes perfect sense. The Lily of the Mohawks. There really was no one else in the Communion of Saints who meant more to my dad than she who represented his people. I think she was behind the scenes all along, interceding for us all, and paving the way for us to share faith in Christ and His Church.

My dad’s conversion had a profound effect on me. After that, we all attended Mass together and prayed for each other. Being Catholic as a family was suddenly very meaningful to all of us.

When I entered college, and later graduate school, this teenaged time in my family faith life was instrumental in my not abandoning the Church. It was not, however, a completely smooth path to my very happy faith life as an adult. How did that all go down, you ask? What saints were involved in that particular adventure, along with St. Kateri? Stay tuned; part two will be coming your way in a future post…

Until then, are you a cradle Catholic or a convert? In either case, why are you a Catholic today? If you had to name one reason, what would it be? I would love to hear your experiences! 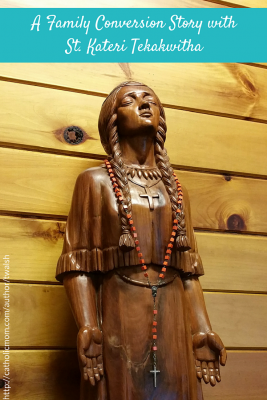 WOMAN: Re-evangelizing the Family
Read
A Broken Family Can Become a Holy Family
Read
Your Family's Purpose in the World
Read