Navigating a Quarterlife Crisis: My Journey with St. Dominic

Let me start off by saying that by the title of this post, you may think that I am in my 20’s. Alas, I am more toward midlife than quarterlife at this point…

…but this post looks back at a poignant time in my life and faith story, and it features a saint whose feast we just celebrated on August 8th — St. Dominic. Last month, I spoke of my childhood faith and that of my family in my teenaged years, and I do plan to write an official “part 2” to that post, about my faith reversion experience in college and graduate school (next month, I promise!). This month, though, let us consider the timing providential, and give St. Dominic his well-deserved moment in the spotlight.

Right around my mid-20’s, I discerned that I was not called to the religious life in the traditional sense, and I moved back to my parents’ house, confused about what the future held for me. The thought, though, of being a lay member of a religious order, with all of the interesting charisms, devotions and traditions that go along with that, really spoke to me.

First, let’s talk about the specifics of what this means. Lay members of a religious order are often referred to as Third Order members. They do not live in community, but dedicate themselves to the charism of the order and meet regularly, if possible, for prayer and fellowship. The members apply the order's spirituality to their specific vocation, whether it be to the married or single life.

So, let’s travel back with 25 year old Tiffany to her parents’ house, praying for vocational discernment. I called the three communities with Third Orders in my area: Franciscans, Dominicans and Carmelites. I figured I would check them all out and then discern which I felt called to.

Before I even heard back from any of them, I had a clear favorite: the Carmelites. I am devoted to many Carmelite saints, and the contemplative nature of their spirituality really appealed to my introverted side. Other people who like to keep silent and to themselves? They’re the ones for me!

I never heard back from the Franciscans. I did, however, hear back from both the Carmelites and the Dominicans, who invited me to come to a Mass and Third Order meeting, and see if I felt called to join them. I was thrilled.

My first stop was the Dominicans. There is a Dominican convent in my area devoted to praying a perpetual rosary, and indeed the rosary is a special devotion for all Dominicans. I too love praying the rosary, so we were off to a good start. Their chapel was absolutely stunning, with a screened area off to the side of the altar through which one can see the cloistered nuns during Mass. And Mass was extremely reverent. The entire congregation waited while the priest first distributed the Eucharist to the nuns via a small window in their grille, and then he came to distribute it to the rest of the congregation, an altar server holding a golden paten to assure that the Host did not accidentally fall to the floor. It was beautiful.

After Mass, the lay community gathered together, and the designated Dominican “recruiter” was an older woman named Florence whom I will never forget. The sweetest, most enthusiastic Dominican you ever could meet, her passion alone made me want to become a Dominican. I was, however, not totally sure at the time about my future with the group. I did like the Dominican devotion to the rosary, and to praying the Divine Office. I also loved the reputation the Dominicans have as being the "scholarly order," including in their ranks many voracious readers and philosophers. All of that suited this rosary-loving bookworm quite well. Dominicans are, however, the Order of Preachers, and I was not sure that described my introverted self very well. I did like a lot of things about the Dominicans, but I felt certain that my calling rested with the Carmelites.

The very next week found me at the Carmelite monastery. They had a similar setup to the Dominicans in that we attended Mass, and then the lay members met. And my goodness, the MASS. Certainly, it is like comparing two spectacular diamonds to each other, because Mass at the Dominican chapel was also beautiful, but I have never been to a Mass during which I had the reaction that I did at the Carmelites. They have a lovely chapel, to be sure, but the distinctive memory for me was that the cloistered nuns are completely invisible to the congregation behind a shrouded black grille. One can, however, hear them praying, chanting, and singing throughout the Mass, and it was absolutely unforgettable. It lent an aura of mystery and sanctity to the whole experience that was incomparable. I was enraptured, and felt like I was floating throughout the Mass, and then the meeting afterward.

So, based upon this, and given that I was already leaning toward the Carmelites anyway, one would think that I started studying to become a member of the Third Order Carmelites (called Secular Carmelites), right?

Life is full of surprises, is it not? I do not fully know what it was, but I kept going back to the Dominicans. I was being shepherded so lovingly by Florence and a man named Ron, both of whom assisted in instruction for new members. I also met another prospective member right around my own age, a woman named Rose who was convinced that God may, alternatively, be calling her to be a cloistered nun.

I kept going back, and the more I learned, the more I liked the Dominicans. I was not yet thinking of becoming a librarian, but I was drawn to the Dominican love of reading and learning, and I realized that the call to be a member of the Order of Preachers for lay people does not mean that one goes around looking for verbal confrontations with others; instead, one is called to be a quiet example with their life. Now THAT is something I can aspire to. And the motto of the Order of Preachers? Veritas. Truth. In the end, are we not all searching for truth? That really resonated with me

Before long, I was progressing in my instruction to become a Third Order member of the Dominicans. It just seemed to fit, and it felt right. I have never given up my love for the Carmelites, but I felt called to be a Dominican.

Ultimately, Rose and I both made vows as Third Order Dominicans, and later became wives and mothers. With the demands of young children, neither of us has been able to attend meetings in some time, but this season of life will not last forever. The key for me is that I remain devoted to Dominican spirituality and charisms, and it is very enriching to my spiritual life.

Is anyone else a member of a Third Order, or thought about seeking one out? Do you feel particularly devoted to the charisms of a specific order? I would love to hear your thoughts on this! 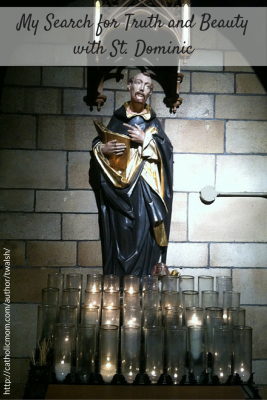