Planned Parenthood vs. the Holy Name of Jesus 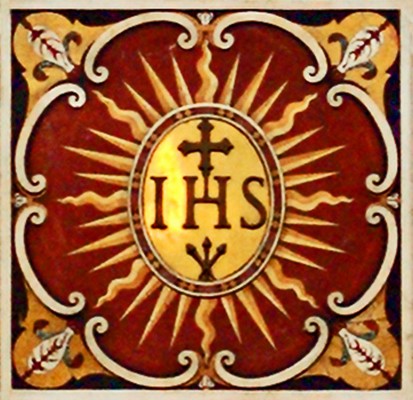 IHS Monogram--the Name of Jesus by Waiting For The Word (2006) via Flickr, CC.

I’ve been thinking a lot about death and evil and names and their power recently, in light of the recent Planned Parenthood videos that have revealed with newfound clarity "Satan and all the evil spirits, who prowl about the world seeking the ruin of souls," as the St. Michael prayer reminds us.

Like so many of us, I’ve been demolished with grief and desperate for hope, and I’ve found comfort in yet another Name:

God also highly exalted him and gave him the name that is above every name, so that at the name of Jesus every knee should bend, in heaven and on earth and under the earth ... (Philippians 2:9-10)

Names have power, and no name has more power than the Holy Name of Jesus, that even the "evil spirits fear his name," as the Catechism of the Catholic Church reminds us. (434)

In The Wonders of the Holy Name, Fr. Paul O’Sullivan, OP writes that the Name of Jesus:

Each of these points spoke directly to me in light of Planned Parenthood’s longstanding known atrocities as well as the newly discovered horrors, as did one of the many stories that Fr. O’Sullivan related regarding the power of the Holy Name of Jesus. He tells that in 1274,

great evils threatened the world. The Church was assailed by fierce enemies from within and without. So great was the danger that the Pope, Gregory X, who then reigned, called a council of Bishops in Lyons to determine on the best means of saving society from the ruin that menaced it. Among the many means proposed, the Pope and Bishops chose what they considered the easiest and most efficacious of all … the frequent repetition of the Holy Name of Jesus. (source)

How familiar does the world of 1274 sound? And how perfect the chosen means of protection.

I posted on my blog recently that Planned Parenthood fears names, meaning it fears the dignity and humanity and love a named baby implies -- the kind of characteristics that make it harder to forget or ignore or hide what’s actually happening in its clinics. But Planned Parenthood likely fears the Name of Jesus even more -- the Name that, as St. Alphonsus wrote, is

powerful in Hell, because this name makes all the devils tremble. These rebel Angels tremble at the sound of that most sacred name, because they remember that Jesus Christ was the Mighty One Who destroyed the dominion and power they had before over man. (source)

, via Wikimedia Commons
For all the grieving, all the suffering, those whose hearts are still hardened and those that have broken free and those who are confused -- for all the victims of Planned Parenthood -- the Holy Name of Jesus offers solace, justice and mercy, forgiveness, freedom, peace.

What examples can you give of the power of a holy name? What is your go-to devotion in times of great sadness or distress?