Editor's Note: Daniel Smrokiwski's column today originally appeared on SpecialChronicles.com and is reprinted here with the permission of the author. Find out about his exciting project featuring his week at the Special Olympics. --Barb 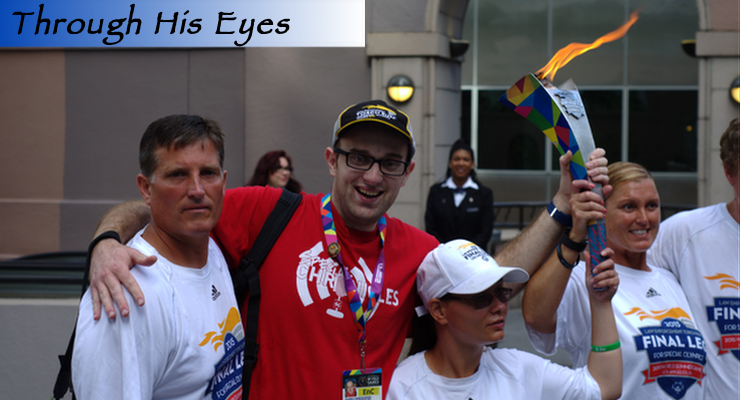 This is a story about a young man named Daniel Smrokowski, a young man with an intellectual disability. Founder of specialchronicles.com, Daniel has overcome many obstacles in his life. As a Special Olympics athlete and a Journalist, his desire to come to Los Angeles for the Special Olympics World Games was a trip of a lifetime for this young man from Chicago, and with limited resources, it was a trip that almost didn’t happen. Along came the Knights Of Columbus of the High Desert, and with their support, airfare and travel expenses were provided to help make Daniel’s dream a reality. Over the course of 7 days, Daniel was able to interview many athletes from all around the globe, as well as the people who put the Special Olympics World Games together. 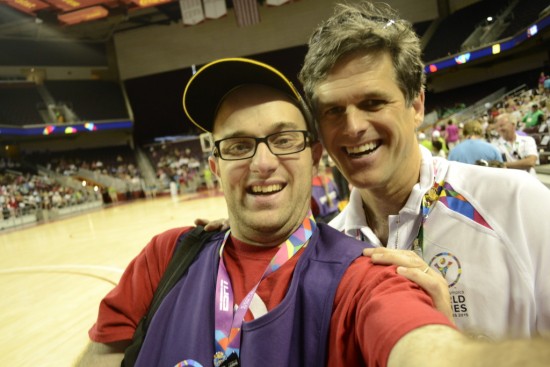 He was able to meet his friend for the first time in person, Tim Shriver, as well as Tim Shriver Jr., with whom Daniel was able to get an exclusive interview. One of the major events that Daniel was able to cover as a Journalist with full press credentials, was the Opening Ceremonies that took place at the Los Angeles Memorial Coliseum. What an amazing night it was, and honestly, from this writer’s point of view, a night of pure inspiration. Watching Daniel as he walked around at field level, interacting with all of the reporters and photographers from ESPN and other major networks, he was truly at home in his element.

This story is one that I hope can help bridge the gap in how people without any disabilities see others with either an intellectual and or a physical disability, and realize that everyone is different in some way, but, despite these differences, we can all strive for our own dreams and aspirations, and help each other to achieve them. Daniel had an incredible time while out here in Los Angeles, but the real news is how much he inspired so many others. I encourage you to check out his website, www.specialchronicles.com, and maybe even subscribe to his podcast which he has been doing for over 7 years now, you won’t be disappointed. So in the meantime, here are a few photos of Daniel at work, and while you browse through them, remember Daniel’s Tagline: “GIVING RESPECT AND VOICE TO PEOPLE WITH SPECIAL NEEDS” 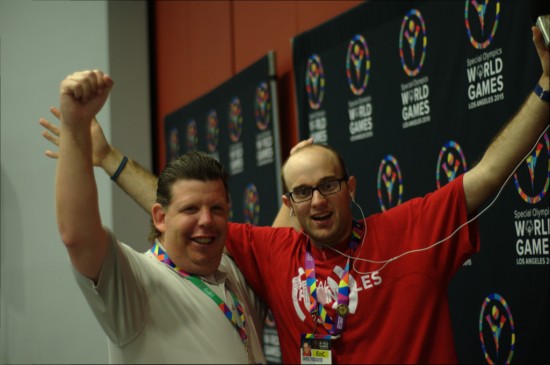 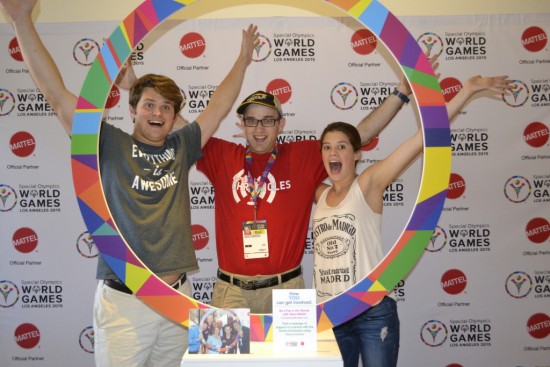 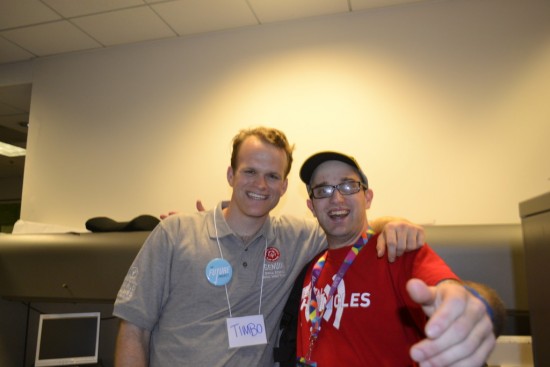 Daniel with his friend Timbo Shriver, co-founder of Spread the Word to End the Word and Emcee of Special Olympics Social Impact Summit by Generation Unified. Photo by Daniel Smrokowski/Special Chronicles. 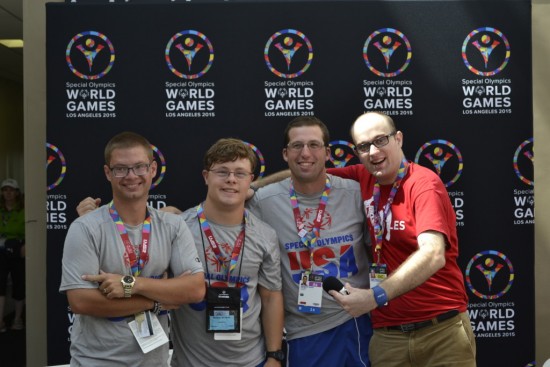 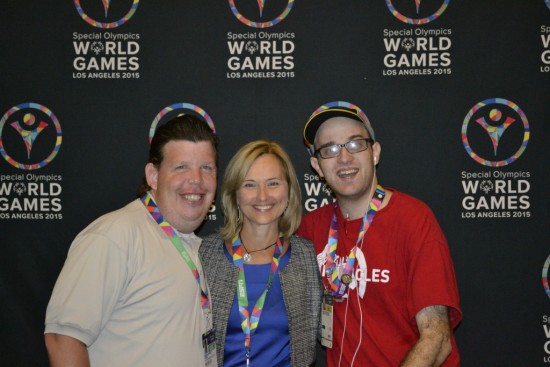 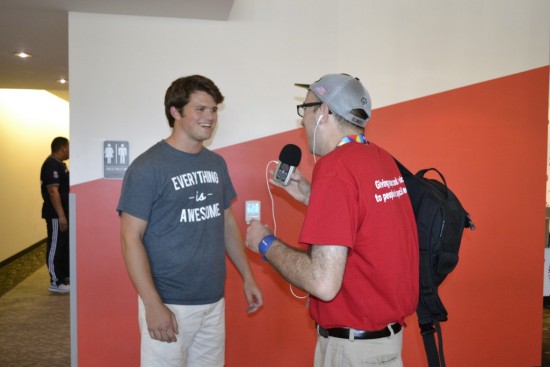 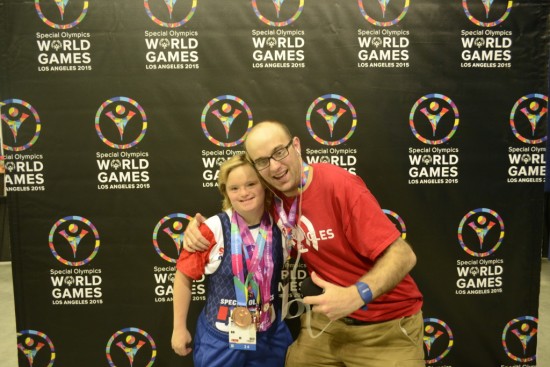 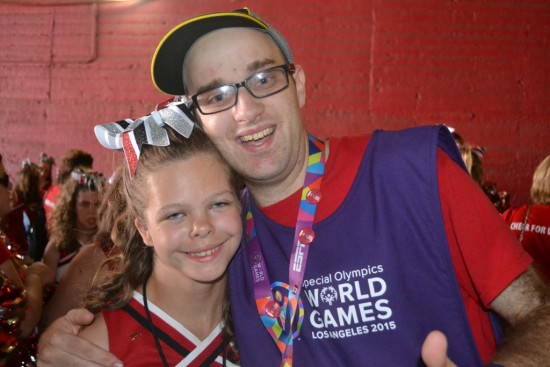 Daniel and Joelle Packard of Maryland who was part of Cheer for LA2015. Photo by Daniel Smrokowski/Special Chronicles.

This photo project revolves around a young man named Daniel who has an intellectual disability. He has overcome many obstacles in his life, and is very sincere in trying to bridge the gap between people with and without disabilities. The project centers around Daniel’s coverage of the Special Olympics World Games that were held in Los Angeles, Ca. in July 2015. He is a true inspiration to the human spirit, and this photo book will definitely be an inspiration to everyone. Once completely funded, the photo book will be available for purchase from our website (www.drhayesphotography.com) at a cost of $65.00 plus shipping, and will be available before Christmas of 2015. 10% of all profits will be donated to Special Olympics International. CLICK HERE to pre-order the forthcoming inspirational photobook “Through His Eyes” and get 15% off and exclusive extras through Sept. 2, 2015, courtesy of Dan Hayes Photography.