Author's note: This article is my response to Halle Levine's piece at Yahoo news: If I knew my daughter had Down syndrome I would have aborted her; all women should have that right.

During the trying days after September 11, 2001, my sense of hope was buoyed by a hidden secret; after two births and three miscarriages, at age 39 I was successfully carrying a baby. I was not about to have a pre-natal test shatter my joy, so I told my OB that diagnostic tests were out of the question. I would take whatever baby I was expecting and love him or her with all my heart. In those days, when thousands of people died unexpectedly, we all experienced a renewed reverence for life.

So, when after an emergency C-section was done at eight months due to an inadequate placenta, those in the OR were surprised to find my daughter Christina had Down syndrome. At only five pounds, she was tiny but feisty, scoring a 9.9 on the Apgar scale. No other disabilities were found besides a tiny 2mm hole in her heart, which by age six months, healed itself. So Christina was ready to come home from the hospital before I was, suffering from a C-section scar.

Coming home was a challenge; we had not finished our kitchen renovations due to her early arrival, so I stuffed towels under my bedroom door, plugged in a small fridge in my room and lived off cheese baskets and home-cooked meals from friends for two months while I figured out how to nurse a baby with Down syndrome. A bigger challenge, I discovered, was helping my family members adjust to Christina’s diagnosis. From denial to fleeing in outright fear, family members failed to support me. Fortunately I found support in my friends, my parish, and the Early Intervention professionals who frequented my home. Christina soon became the heart of our home. Family members who saw her as something to pity or fear were won over by her toothless grin when she saw them; she became a daddy’s girl, and her grandfather held her hands as she practiced walking across the living room. 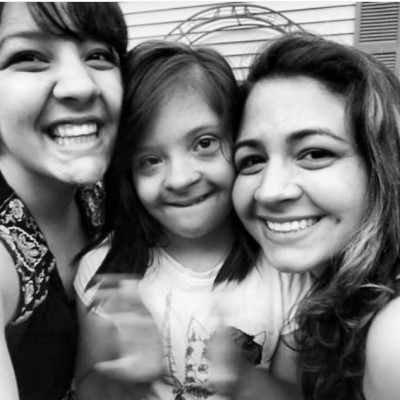 School was another matter. Long Island schools do not accept lower-functioning children with Down syndrome and Christina’s toileting skills were not advanced enough to be admitted in the local elementary school. I was not pleased with the inferior facilities offered for those children with special needs, so we picked up and moved to Connecticut where there is full inclusion by law. Soon Christina was taking the morning bus to Kindergarten in rural Eastern CT. She became famous with her peers; everyone in the school knew Christina’s name and she gleefully waved back as they greeted her in school. I couldn’t be happier, she was reading simple sentences and had wonderful teachers, therapists and paraprofessionals who motivated her, enjoyed her personality and even missed her during vacations.

When I learned about the high rate of abortion following a prenatal diagnosis of Down syndrome, I was devastated and wanted to encourage other parents that raising a child with Down syndrome was not overwhelming. My daughter and I completed a video about her life, and I blogged about everyday life with Christina. In 2011, I published a book of stories from parents who, like me, never expected a child with special needs; yet found them to be their greatest blessing. I met with scientists, the media and members of Congress, while touring the country giving talks about life with Christina and Down syndrome in general. Accustomed to being a classroom teacher, I had vastly expanded my audience. My lesson was simple: if you abandon your previous expectations and allow your child with special needs to transform you, you will be amazed at the result.

My own older daughters agree with that; both of them chose careers in nursing after being inspired by watching such professionals help their sister.

Just as I became known as a voice of encouragement for those raising a child with Down syndrome, a major challenge emerged in our journey. In 2012, Christina’s speech development began to stall. Her physician recommended that she receive more intensive instruction and the Special Ed Director suggested that she leave inclusion for a full day in a self-contained classroom. It was a tragic mistake; Chrissy hated the restrictive environment and missed her friends. Her overtures to the children in the program, which was designed for children with autism, were largely rebuffed, and she was constantly being trained to rein in her attempts to gain attention by touching others and their belongings. This began two years of conflict between us as I spent hours every day, often with professional help in my home, convincing her to attend school. I had a dozen professional evaluations done to prove that she needed to be placed in another program outside the school, and retained an attorney to convince the school, but they would not consider it.

The three psychologists who evaluated her were divided about whether she had a secondary diagnosis of autism, yet the Applied Behavioral Analysis program at her school, which is often recommended for such children, was not meeting her needs. Child Protective Services was called by the district twice because of her spotty attendance, and in both cases, the CPS worker was outraged that she was being denied a proper school placement, and tried to help us advocate for her. In December of 2013, I withdrew Christina to homeschool her.

Being at home with Christina without fighting with her over attending school was a huge relief. We enjoyed one another’s company again. We took trips to local parks, met with homeschooling groups, counted math manipulatives, enjoyed Montessori activities, practiced her writing, did aqua therapy in a local pool, and frequented the library to read stories together. We found a speech therapist who believed in her ability to speak and she made slow but steady progress (the Special Ed Director said, at age ten, that Christina would never speak). We found an Occupational Therapist who helped her start to overcome her sensory integration disorder which was the cause of much of her attention-seeking behaviors. We are currently working with a behaviorist who helps us help Christina improve her social skills. A state grant provides us with in home support for us so I can have a day off, attend an out-of-town conference or just catch up with my writing. I am working on a novel whose main character has Down syndrome.

Homeschooling was not new to me; I had schooled Christina’s sisters, but writing, speaking, and advocacy were new fields of endeavor. I have learned more about the exciting research like this new breakthrough and I have scores of new friends who, like me, never anticipated how our children would turn our lives upside-down--for the better.

I hope that there comes a day in which all parents will be able to overcome the anxiety which often accompanies a prenatal diagnosis of Down syndrome, and they are free to welcome their child with open arms, but until then, I support banning discrimination against an unborn child with Down syndrome. Aborting because of a baby’s physical characteristics is equivalent to aborting a baby girl because she is not a boy. We can help parents who are feeling overwhelmed with a baby with Down syndrome find support, resources, or in truly difficult cases, an adoptive family. What we can’t do is undo the tragic decision to end a life ended because of fear of the unknown and bring back the wonderful potential hidden behind an extra chromosome.