Is there a teen or tween girl in your family? Then allow me to introduce you to the Ali series by Christine Marciniak. The fourth Ali book was published this summer--here's the trailer!

My once-a-week gig as a volunteer school-library helper gives me an excuse for keeping up with what's new in fiction for kids of all ages, so I've read all of the Ali books and purchased copies for the library. Here's a little about the story and the title character:

Ali Caldwell, age 14, is the daughter of divorced parents. Her reality-TV-star mom abandoned the family early in Ali's childhood to pursue a Hollywood career. Her dad, a wealthy businessman, has spent Ali's growing-up years sheltering her and her older brother from the media spotlight. When Ali joins her brother at boarding school, she decides to take advantage of her newly-found freedom and find a way to get noticed so she can become famous like her mom.

In addition to the usual adolescent experiences such as stressing out over the academic demands of high school and navigating the pitfalls of teenage social life, Ali puts herself in the way of paparrazzi, stalkers, and others who don't like her for herself but only for what they think she can bring to them because of her rich and famous parents.

These are good stories, with an honest look at mistakes, motivations, and consequences. These books, in this mom's opinion, are appropriate for students in middle school and up. In chronological order, here's how the series runs:

I asked author Christine Marciniak a few questions about her novels:

Are there plans for more Ali books?

At this time I don’t have any more Ali books planned. While I love Ali and the cast of characters that surround her, I think I may have exhausted the good story ideas for her without things either getting repetitive or bizarre. That said, if I should come up with another Ali story that I feel really needs to be told, maybe there could be more. Right now I am concentrating on other characters whose stories need to be told.

Who's your favorite supporting character? (novel or series, you choose)

I have to say I actually have two, and they both are featured throughout the series. The first would have to be Ali’s brother Mark. He’s such a fun character to write, and such a great big brother. Two years older than Ali and supremely self-confident. He’s the guy everyone loves. He and Ali have great brother/sister chemistry and their dialogue is some of my favorite in the books. He has no qualms about interfering in her business and although she may say it drives her nuts, she really likes that he cares.

My other favorite has to be Ali’s mother, Margo Schaefer. Margo is a celebrity. A movie star, director and also star of her own reality series. She’s a fantastic actress. She’s not such a great mother, though she’s learning, and by the end of the fourth book, you can actually believe that she’s starting to get this mothering thing under control. I love Margo for her imperfections and her ability to take over any scene as soon as she’s introduced. When writing, I never hesitate about how Margo would respond in any given situation. It’s always all about Margo and it’s always over-the-top.

Why did you choose boarding school as the setting?

Boarding school is a convenient setting for a novel about teens because it removes the parents from the picture and allows for adventures that attentive parents might otherwise have been able to put a stop to. That’s the practical answer.

The real answer is that I started writing stories with the character who would eventually become Ali when I was in high school. I watched (the 80s sitcom) The Facts of Life which was set in a boarding school, and I thought that would be a fun setting for a story. Since then many things have changed, even the main character’s name changed several times, but she was always at a boarding school. The boarding school is as much a part of Ali’s story as anything else, it’s part of what makes her who she is.

I love being able to get inside the head of different characters, and to bring different sorts of people and places to life on the page. I love creating characters and putting them in complicated situations, whether it’s Emma, struggling to figure out who she really likes in my first book, or Ali dealing with stalkers and blackmailers and everything else in this series, or the characters in some of my works in progress who deal with everything from time travel to coups to ghosts. I deal in fiction, in characters and places and situations that don’t necessarily exist, but at the same time, the novels allow me a chance to explore broader truths. 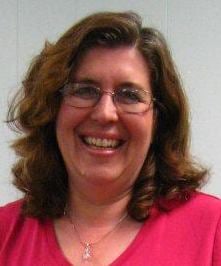 Christine Marciniak lives in Central New Jersey with her husband and two teens. She graduated from Trenton State College (now The College of New Jersey) with a BA in English Literature. She spent ten years as the editor of The Official Cruise Guide, and now writes full time. ALWAYS ALI is her fifth book.

Learn more about Christine Marciniak and her books at ChristineMarciniak.com or her author page on Facebook. Ali also has her own Facebook page!

If you use our Amazon link to purchase any of these novels, CatholicMom.com gets a small percentage of the sales.