“Who says Catholic are stoic?

Who says Catholics are quiet about their faith?

There truly is something for everyone in the Catholic Church. And sometimes what you find might surprise you.” 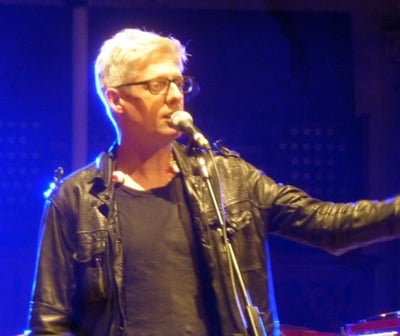 Anyone who enjoys Contemporary Christian praise and worship music knows about Matt Maher. Coming on the scene in 2007, Maher has written and produced eight solo albums with three of them having reached the Top 25 Christian Albums Billboard chart; four of his singles have reached the Top 25 Christian Songs chart (Wikipedia). He was awarded the Dove Award this year for Songwriter of the Year and Best Song ("Because He Lives (Amen))"

He is the only Catholic musician to have garnered such awards. Maher served for thirteen years as a Lifeteen music minister at St. Timothy's in Mesa, AZ where he met Liz Corupti, now the director of the New Evangelization Worcester for Youth & Young Adults (part of the Worcester Diocese). She brought Maher to Worcester to enthusiastic crowds.

This is the article I wrote for the Catholic Free Press about the Matt Maher concert at Mechanics Hall in Worcester, MA on Friday, October 16. The paper's editor attended the conference and was so impressed that she dedicated an editorial to it (see above quote).

From the October 23, 2015 issue of The Catholic Free Press

Liz Corupti has a vision for Worcester. "I want to expose the diocese to great music, especially Catholic music," she says. The director of Youth and Young Adult ministry for the diocese, Corupti believes in exposing young people to music with a good message to counteract all the negativity that they hear in secular music.

Canadian-born Maher, a former Lifeteen musician from St. Timothy’s in Mesa, AZ, entertained the crowd with perennial favorites “And All the People Said Amen,” "Lord, I Need You" (made famous at World Youth Day 2013 where he performed for four million), “Hold Us Together” and "Your Grace is Enough," while introducing new songs from his eighth and latest release, Saints and Sinners.

Maher told the stories behind the songs including the revelation of Blessed Mother Teresa's spiritual darkness, laid out simply in the song, "Firelight":

Dear Jesus where are you tonight
I bear a sadness deep inside
I'm aching for a faith in things I strain to feel
I need to know that you are real.

In "Instrument," Maher paraphrased the famous prayer of St. Francis:

Where there is hatred Lord, let me sow your love
Where there’s injury, let forgiveness be enough
Are we giving up, fighting the good fight
Where there is despair, just a flicker in the flame
Could break the veil of night

The highlight of the night was his performance of "Because He Lives (Amen)," recent winner of the Dove Award for Best Song of the Year. Maher's passion for Christ so evident in his singing caused this concertgoer to shed tears. Everyone was on their feet, singing, swaying and lifting their hands in praise of God.

Lyrics to all of Maher's songs were displayed on a screen but it was hardly necessary; the crowd knew each song cold and sang with all their hearts.

“The concert really fed my heart, and was the kick I needed,” says George Leite, longtime fan and proponent of Catholic music with his catholicjukebox.com website. “Matt has gone places in Christian music that no one else has gone, without ever hiding the fact that he's Catholic. There is something unifying about his music. His lyrics are deeper than many contemporary Christian artists, reflecting the fullness of faith he has grown up with. With tradition, the magisterium and the saints to draw upon, Matt blends it all perfectly.”

Opening for Maher were three acts from his label, Essential Records: Jon Guerra, Hannah Kerr and I Am They. All were polished and passionate. Of special note was Guerra's plaintive rendering of "Stained Glass" (co-written by Maher), a song about being loved by God despite our brokenness. Worship band I Am They had the crowd on their feet.

In speaking with Maher before the show, I found him to be humble and incredibly balanced; there was no rock star persona to be found. He attributed all of that to several things: "Most artists are pretty neurotic and narcissistic. They kind of have to be a little bit for their art. But there is where my relationship with Christ and the Church is really what is grounding me. My vocation of being married keeps me tethered to the ground; it helps you stay humble. It's not in a self-deprecating sense but in a sober sense. I'm turning 41 and I could do this forever. I'm not a rock star and I'm okay with that (we're shopping for minivans as we have a third kid on the way!). You want to celebrate every moment that you have because you don't know if it's going to last; there's no guarantees in life. I'm just grateful to be here and grateful for where I am."

Maher's advice to aspiring musicians was to "Serve the Church. It's an honest mistake that young people seek fame first. Whatever your gift or talent is, I think you should pursue excellence with it. Do the best of your ability and give the rest to God. You never have to kick down a door that God opens to you."

With fine Catholic artists out there like Matt Maher, Liz Corupti's vision of bringing the good message of Catholic music to the diocese is off to a great start. Here’s hoping for more.