Open Source – An application whose programming code, or source, is open to the public in order to view, modify, or create plugins for the application.

This is a brief, albeit exciting update to my previous post entitled “Tech Talk: Free Offline Blogging Software” on 6/16/2015.

Windows Live Writer is/was a great way to give Windows users a free way to create blog posts offline using a digital word processor format similar to that of Open Office, Libre Office, or Microsoft Word. The problem was, Windows Live Writer wasn’t being further developed, despite a vocal fan base. Microsoft could not see the sense of spending time and energy on a project that they felt was not serving a business need. Windows Live Writer was semi-abandoned by all but a group of dedicated volunteers at Microsoft in 2012.

The New Kid on the Block

To give credit where it is due, the information I am sharing comes from Scott Hanselman and from the .NET foundation websites. 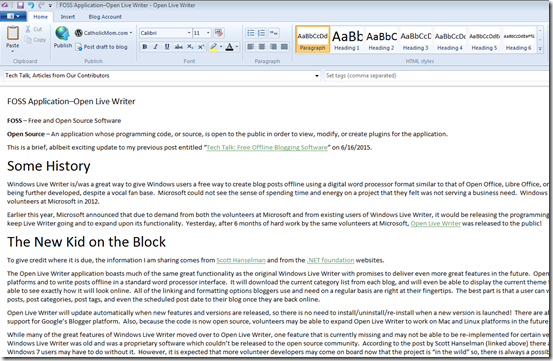 The Open Live Writer application is the “spiritual successor” of Windows Live Writer and boasts much of the same great functionality as the original with promises to deliver even more great features in the future. Open Live Writer allows a user to connect to one or more blogging platforms and to write posts offline in a standard word processor interface. It will download the current category list from each blog, and will even be able to display the current theme formatting for many so that as a user writes their post, they will be able to see exactly how it will look online. All of the linking and formatting options bloggers use and need on a regular basis are right at their fingertips. The best part is that a user can write as many posts as they want offline and then upload/sync the posts, post categories, post tags, and even the scheduled post date to their blog once they are back online.

Open Live Writer will update automatically when new features and versions are released, so there is no need to install/uninstall/re-install when a new version is launched! There are also plans to update various security authentications needed to keep support for Google’s Blogger platform. Also, because the code is now open source, volunteers may be able to expand Open Live Writer to work on Mac and Linux platforms in the future. It isn’t a guarantee, but it is possible with the right people.

While many of the great features of Windows Live Writer moved over to Open Live Writer, one feature that is currently missing and may not be able to be re-implemented for certain versions of Windows is spell check. Unfortunately, the spell check in Windows Live Writer was old and was a proprietary software which couldn’t be released to the open source community. According to the post by Scott Hanselman (linked above) there are plans for Windows 8/10 users to see a return of spell check, but Windows 7 users may have to do without it. However, it is expected that more volunteer developers may come on board now that the project is “in the wild,” so there is always a possibility someone will come up with a solution.

Open Live Writer represents an effort started in 2013. This is one of the first times that a major Microsoft software has been released into the public domain. It is a huge success for the volunteers who worked so hard to get the code ready for public release and to those fans of the application who have relied on the original version to help keep their blogs running smoothly. If this kind of software is useful to you, please show your appreciation by heading over to http://openlivewriter.org and downloading the latest version! There is also a mailing list to keep people informed of the latest developments in Open Live Writer. Oh, and yes, this post was proudly drafted and uploaded through Open Live Writer.

What is keeping you back from blogging and speaking your mind?