There are, seemingly, a million names that can be considered for a baby born at Christmastime. If you wanted to, you could find names connected to the colors and decorations of Christmas, the traditional Christmas movies and TV specials, and your favorite Christmas carols.

But for this article, I'll focus on names related to the three key players: the members of the Holy Family. 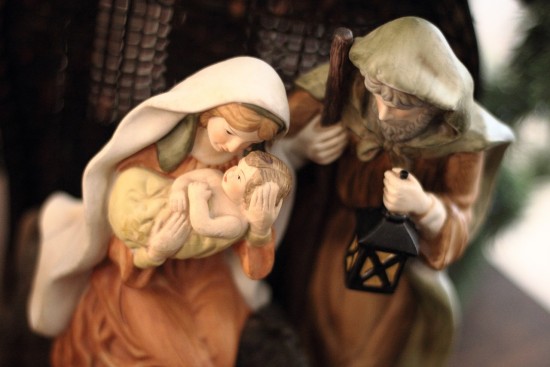 Once he was sure that he should take Mary as his wife, good St. Joseph embraced his calling and took care of the Mother and her Child; he’s an integral part of every Nativity scene. Names in his honor for boys include, of course, Joseph, and its variants in other languages, such as Josef and Jozef, Giuseppe, José, and Joosep. Several of the non-English diminutives and short forms are intriguing as well, including Pepe, Seppel, and Zef.

The feminine Josephine is currently popular, but other options for girls include Josephina, Josepha or Josefa, Josée, and Giuseppa, with the sweet diminutives and nicknames Josie, Posy, Josette, Josiane, Pina, and even Fifi.

In Matthew 1:19, we’re told that Joseph was a “just man,” so Justin, Justus, and Justine or Justina could also work as honor names for him. 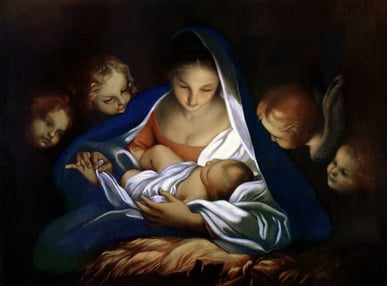 Of course, any of the forms of Mary would be appropriate for a baby girl born at Christmastime, from Maura to Maria to Miriam to Maja, and the many many others.

I recently made the exciting discovery that the names Mabel and Annabel are related, as it seems both are, originally, variants of the name Amabilis. As such they both can refer to the Marian title Mater Amabilis (Mother Most Amiable), which is fitting for the holy day on which we celebrate Mother Mary giving birth to her Baby.

A Marian name with a double meaning for a Christmas baby is Stella, which can refer both to the Marian title Stella Maris (Star of the Sea) and to the Christmas star.

Though it isn’t considered reverent for English speakers to bestow the name of Jesus on a baby, the Spanish version Jesús is well used in the Latino community. Otherwise, Joshua is a variant of the name Jesus, and is wonderful for a Christmas boy.

Dominic means “of the Lord,” which is a great, Christmasy meaning on its own; even more so when one considers that in Latin, Christmas day is rendered as natale domini (literally, “the birthday of the Lord”).

Finally, Emmanuel can be used in one form or another for any baby: Emmanuel, Immanuel, and Manuel for boys; Emmanuelle, Emmanuela, Manuela for girls. The nickname Manny is adorable for both boys and girls, and Emma, Ella, and Nela can be used for girls as well.

Not all parents of Christmastime babies like the idea of giving a holiday-specific name to their little one, while others consider it nearly a requirement. Would you or did you give a baby born at Christmastime a Christmas name, and if so, which one? Even if you wouldn’t, or haven’t had the opportunity to do so, what are your favorite Christmasy names?