Now on DVD: a TV Series that Proclaims God's Mercy and Love

If you watched TV in the mid-1990s, you've probably seen Touched by an Angel. For me, the show was "must-see TV." I don't think I missed many of the over 200 episodes of this beloved program, which followed Monica, a guardian-angel-in-training, as well as her mentor Tess and the Angel of Death, Andrew, as they interacted with people in need of tangible signs of God's mercy. 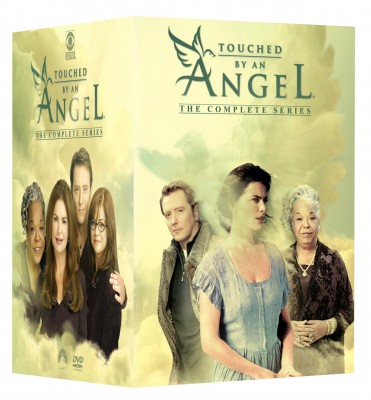 At least once per episode, you'd hear an angel reassuring a suffering soul that God loves them. (On network TV, in prime time, no less.)

I know the show was all about Monica (Roma Downey) but my favorite character is Tess, played by Della Reese. To me, she embodies spiritual motherhood, mentoring Monica (and sometimes people in crisis) with a healthy dose of wisdom and humor that's insightful and sometimes blunt but never mean. We can all use a friend like Tess; she's a great one to have in your corner.

Now you can get all 9 seasons of Touched by an Angel on DVD. They're great family entertainment and a reminder that sometimes we all need that extra reassurance of God's love.

More about the show:

As angels, Monica (Downey) and Tess (Reese) travel the world empowering lost souls at a crossroads in their lives. Eventually joining their team are Angel of Death Andrew (John Dye) and rookie angel Gloria (Valerie Bertinelli). With courage, insight and humor, these down-to-earth angels spend nine seasons raising hopes and lifting spirits. Featuring all nine seasons and 211 episodes, the angels shine light in the face of adversity and inspire people to rise when they come face-to-face with the struggles of everyday life. Blessed with an A-list roster of guest stars, the acclaimed hit series takes fans on a journey that captures a little piece of heaven on earth.

I've previewed samples from these DVDs, and I think the world needs the message delivered by these "angels" even more now than it did 20 years ago when the shows first aired. It's definitely not a bad thing to have the program's theme song stuck in my head.

Buy this 211-episode boxed set through our Amazon link and support CatholicMom.com with your purchase!

God's Mercy in Answering Prayer #OTEM
Read
Movie Review: God's Not Dead 1 and 2
Read
The Feet Washing: How God gave his mercy through me #OTEM
Read