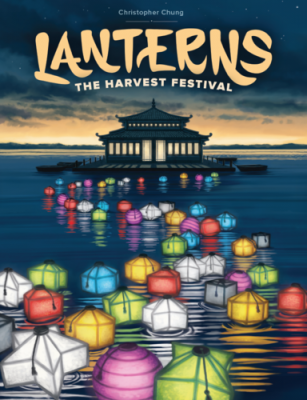 There are some games that take a long time to set up, explain how it works, play, and then score. And then there are other games that you can sit down, explain the rules in two minutes, open the box, play and score in 30 minutes. Lanterns: The Harvest Festival is one of those quicker games, and because my wife likes the lighter and quicker games, it has been making it to the table a lot lately. Let me tell you about the game!

Lanterns: The Harvest Festival is a tile-placement game for 2-4 players. The recommended age is 8+, but can be played at a much younger age. Total playing time is approximately 30 minutes, It retails for $35, but you can usually find it for around $25. The game takes place during the time of imperial China. You are an artisan who is decorating the palace lake with colored lanterns, which you will exchange for honor. The person with the most honor at the end of the game wins. Simple, right? Right! Let's get to the set-up for the game, which I will explain for 4 players, as this is the best number of players to play with. 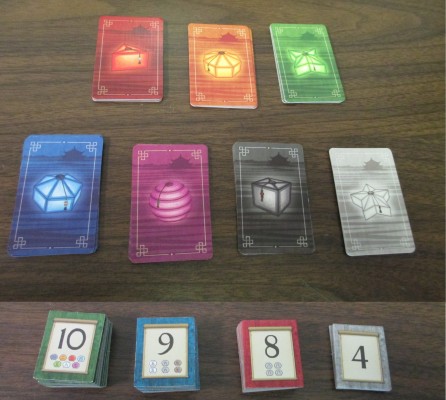 Begin by making a stack for each color of lantern cards (red, yellow, green, blue, pink, grey, and white). Underneath them, place the dedication tokens in four stacks - green, blue, red, and grey. Each stack of dedication tokens should have the numbers arranged from largest to smallest. You will then have a pile of wooden discs called favor tokens. Last in the box are the lake tiles. Pull out the one with a brown boat in the center. Then, shuffle the rest of the lake tiles face down and deal everyone three. Arrange the players so that they are sitting like the points on a compass (North, South, East, and West). You may then either select the first player or spin the lake tile with the boat on it. Whoever, the red area ends up pointing at goes first, because red is considered lucky. 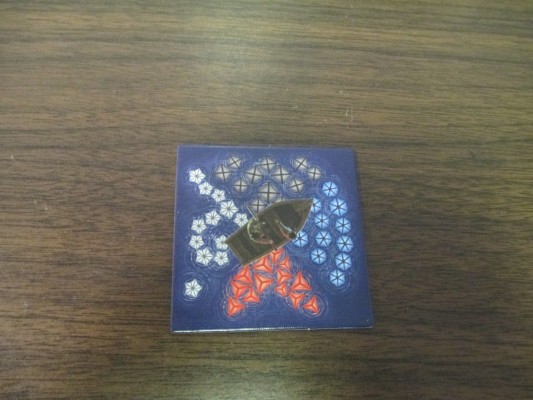 Looking at the first tile, you can see there are four colors on it - red, white, grey, and blue. Depending on where you are sitting is what color lantern card you will receive. If I was the starting player, I would receive red. The person to my left would receive white. The person across from me would receive grey. And the person to my right would receive blue. It is important to distribute the lantern cards clockwise, as they could run out, and if so then that person would just be out luck and not receive a card. Now, it would be my turn to place a lake tile, and I place one underneath the starting tile. If I matched the connecting colors (not something that is required, but it does behoove you), I would get a red lantern card for making a color match and a blue lantern card because that is the side of the tile facing me. The other players would get pink, red, and green respectively. I draw a replacement lake tile to get my total back up to three, and it's the next players turn. That person plays a lake tile with a platform on it. The platform gives them a favor token if they matched the color of the tile they played next to, so they get one favor token, a white lantern card for the color match and a yellow lantern card, because that is the side facing them. Everyone else would then get a green, white, and green respectively. 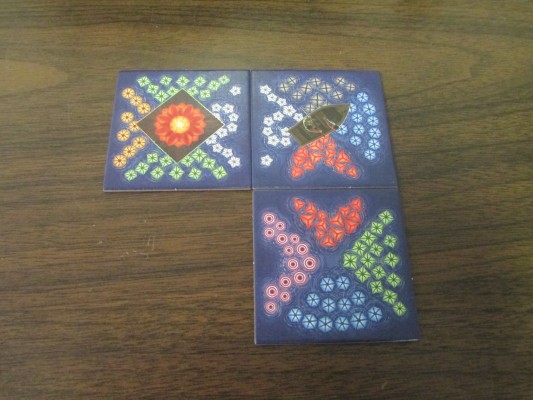 I really like this game, because it is deceptively simple. By that I mean, it is easy to learn, but there are different strategic moves you can make to benefit you and/or hinder others. For starters, everyone has a hard time getting it out of their heads that colors on lake tiles have to match. Most of the time, it is to your advantage that they do match, because it nets you an extra lantern card. However, if you have six different lantern colors, and you need one more to claim that ten-point green dedication token, it might be to your advantage to not match the colors and instead place a tile in a way to get you that seventh color. You can also pay attention to what lantern cards other players have, and if you see that they are one lantern color short of cashing in, make sure they don't get that color. In addition to the simple strategy, it is just an easy and fun game. The gameplay and goal is straightforward and when you're done, you can sit back and admire the beautiful lantern display you made for the emperor. (Side note, the emperor is Christopher Chung. His last name is the symbol that appears on the favor tokens.) If you are looking for a relaxing and fun game to play with the kids or warm you up before tackling a bigger, more serious game, Lanterns: The Harvest Festival definitely scratches that itch!

Your purchase of Lanterns: The Harvest Festival through our Amazon link supports CatholicMom.com at no extra cost to you!