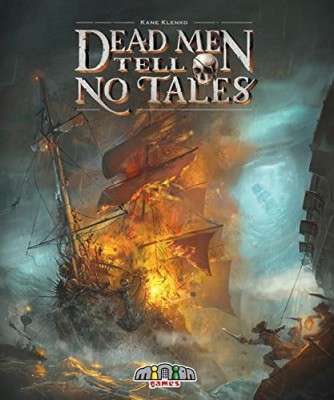 Mentioning Kickstarter with board game reviews may start to become redundant, as the two entities are going hand-in-hand lately. There are mixed feelings on this, which I won't bother getting into, as I'm not here to debate that subject. I for one am mostly in favor of it, as long as it is used primarily for upgrading the quality of the game and not proving copious amounts of exclusive content that people will never be able to purchase again, unless they want to shell out obscene amounts of money. I provide this brief introductory note because the game I am reviewing today was a Kickstarter success that used the money they raised to add to the beauty of the game. It did have one exclusive card, but you can still easily buy it from them for a few bucks if you want. It doesn't alter gameplay if you choose not to. The game is called Dead Men Tell No Tales, and it was published by Minion Games.

Dead Men Tell No Tales is a fully cooperative game for 2 to 5 pirates, ages 13 and up. It takes approximately 60 to 75 minutes to play and retails for $45. In this game, you and your fellow pirates will be raiding the most notorious ship on the high seas - Skelit's Revenge. Your aim is to collect all the treasure on the ship and return it to your captain!  It sounds simple enough, but the ship is quickly burning, and the ghost crew is also guarding the treasure and won't so easily surrender it. Can you manage the flames, overcome your fatigue, and fight your way to fatigue? Or will Skelit's Revenge claim another one for Davy Jones' Locker? 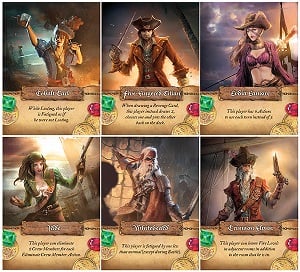 Each player picks a Pirate (Jade, Whitebeard, etc), their Pirate Meeple, five Action Coins, and an item (dagger, compass, etc.). You also take a Player Board, which will track your Fatigue and Battle Strength. To set up the game board, start by placing the Starting Tile on the table. Then, for each of the four starting rooms roll a Fire Die that matches the color of the square in the middle of the room. If you roll a six, re-roll until a number besides six appears. (These numbers tell you how hot the fire is in each room, and you can't start with a six because when a room hits a six, it explodes!) You then place one Deckhand (white skull) in the top room with the Trapdoor icon. Shuffle the Skelit's Revenge Cards and make a face down stack. Do the same for the Room Tiles. Place the 20 double-sided tokens in a bag and mix them around. (I recommend leaving out Captain Skelit your first time playing). Lastly, put your Pirate Meeple on the small boat by the entrance of the game board and decide how difficult you want the game to be by determining how much Treasure you want to claim to win. For beginners in a group of 2-3, four Treasure is the recommended number. After the ship is setup, a player's turn is divided into three steps. 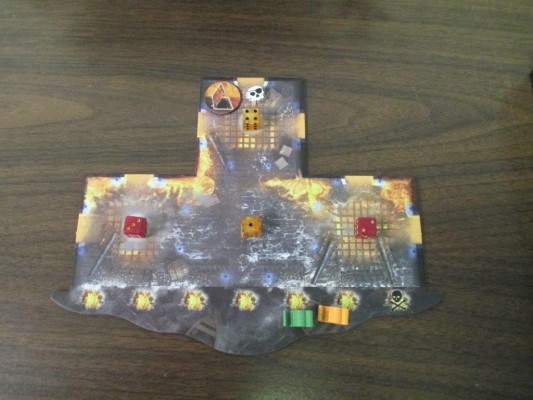 1. Search the Ship - In this step you turn over the top Room Tile and place it where all the doors line up with other rooms' doors. (Side note; On every player's first turn, they turn over two Room Tiles.)  If you cannot place a room according to tile placement rules, you lose, so don't close off doors early on and leave yourself plenty of options. You then place a Fire Die in the room, which matches the color and pip count of the square in the middle. Next. draw out a double-sided token and place it in the room. If it's a Treasure token, place it guard side up. The number on the guard indicates the Battle Strength you need to defeat him. If it's an item (grog or cutlass), place it Skeleton Crew side up. You must have a Battle Strength of 3 to defeat them and claim the item. If it's a Trapdoor, place it in the room with one Deckhand.

2. Take Pirate Actions - In this step, you can walk, run, loot fight fire, eliminate a deckhand, pick up a token, rest, increase your battle strength, or swap an item card. Each of these choices costs an Action Token to accomplish and some even will fatigue you. You could also use the action on your item card for free. Beware when taking fatigue, the more you take the fewer rooms you will be able to enter. For example, if your fatigue reaches nine, you can't enter rooms with a dice count of 4 or higher. If your fatigue reaches twelve, you can't enter rooms with 3 or higher.

3. Skelit's Revenge - Draw a Skelit's Revenge Card and resolve the action on the card. The action can be raising the fire level of certain dice (number and pip count), adding deckhands, or moving Skelit's Pirate Crew closer to the nearest Pirate Meeple. This is where the game gets interesting. Rooms get hotter here, and if you haven't been managing the fires, the rooms can start to explode. Seven explosions and you lose!

You and your fellow pirates will continue to take these three steps each turn, until you beat the game or the game beats you. Luckily, if you die in this game, as long as there are still other Pirates available, you can pick one of them and try again. Unfortunately, there is only one way to win (get the required amount of Treasure), but there are many ways to lose - including explosions, trapping yourself in a corner and being unable to play more Room Tiles, or dying and there not being another Pirate to play with.

This was my first experience in the world of cooperative gaming, and overall I found it quite enjoyable. For starters, the components of the game were high quality (Thank you, Kickstarter!), and not your typical cube and generic tokens. The only knock against the components is that the starting board is one block of four rooms and not four separate rooms. Since any room can explode, including the starting rooms, the ability to flip them over and not just cover them up would have been great. After the component quality, the next thing I would praise is the game mechanics. This is truly a fully cooperative game. You either all win, or you all lose. There is no, "Well, we all won, but I had more points so I technically win more." The decisions you make can help or hinder your fellow pirates, so you need to help each other or you will fail. The last thing I really enjoyed was the theme. This was not a board that they just slapped a pirate theme on, but it was well thought out and well-executed. With the number of different pirate characters, the number of treasures you can pursue, the random nature of dice, and the random order you will draw each room tile, no two games will ever be the same. I highly recommend this to families with teenagers (who think they are too cool to play games with their parents). I also recommend it to people who want to introduce board games to new time gamers (as cooperative games are easier to get people playing as opposed to competitive games, where new timers feel like they are already at a disadvantage.)

This game was provided to me for free by Minion Games in exchange for an honest review. If you found this review helpful, please click here and hit Yes. Also, be sure to check out Minion Games' latest Kickstarter campaign for The Manhattan Project: Energy Empire and help another one of their games be the best it can be!