Hack-and-Slash video games were a big part of my time in college. While other people were out partying, drinking, and going to class (the typical college experience), I was burning hours in front of a computer screen on a game called Diablo 2. Looking to bring that video-game experience to board gaming, Super Fantasy: Ugly Snouts Assault was created. This cooperative game is designed for 1 to 6 players, ages 8+. It takes approximately 90 minutes to play and contains loads of different missions. 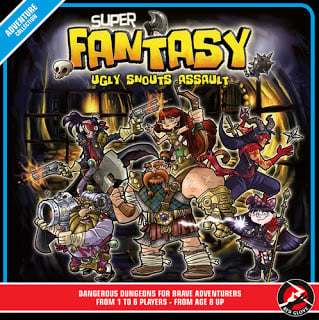 Super Fantasy: Ugly Snouts Assault is a hack-and-slash/dungeon-crawl game that doesn't take itself too seriously. There is some tongue-in-cheek humor and nods to video games of this type. The six character types are traditional classes, but unlike a bard who plays a harp, the instrument of choice is an electric guitar. The art, rule book, flavor text all have some humor in them as well. Another positive for the game is the replay value. With six characters to play with, multiple missions, varying difficulty levels, and a modular board you will have plenty of opportunities to experience new game play. You could also play solo or be the ultimate villain and play against your friends as they try and take you down.

The negatives of this game are that there are so many components and mainly just little pieces of cardboard. This is to be expected for a dungeon-crawl game, but it can still be overwhelming at first blush. All these pieces also create for a long setup time. The game also can be a bit random with dice rolls. Sometimes you feel like you aren't making any progress, and as the game gets closer to ending you know you are going to lose and it just can be frustrating. If dungeon crawls are your type of game, this is one that is definitely worth checking out. Be sure to also check out the sequel Super Fantasy: Night of the Badly Dead.

[tweet "For your #FamilyGameNight: a choice between castles or dungeons! Review by @StuartsStudy"] 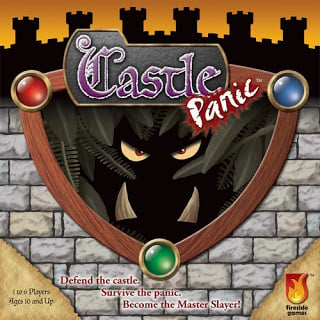 Cooperative games are one of my favorite games to play with my family. I am part of an overly competitive family, so it is a nice break from trying to crush each other and work together. And it means I can let younger family members play, because even though they will need a little help, it's not like I am helping them to win at my detriment: I am helping them to win for the good of us all. With all that said, I would like to tell you about one of my favorite cooperative games - Castle Panic. This is a game for 1 to 6 players, ages 10+. It has three expansions for it - The Wizard's Tower, The Dark Titan, and Engines of War, which raises the age to 12+ but keeps the player count at 6. As opposed to telling you about the setup and game play, I want to tell you about what the base game contains and what each expansion adds to it.

Game Review of the Base Game

Castle Panic by itself is a fun game for the whole family. The rules and mechanics are simple enough that kids and adults can easily pick up the game, even younger than age 10 (the recommended age). The board is also colorful and both boldly and clearly labeled, which adds to the easy learning curve. The castle and wall pieces are simple cardboard standees, but it adds an visually appealing 3-D element to the game and is devastating to watch them be destroyed and removed from the game board. What I really love about this game are the monster tokens. For starters, when you have to draw a new one, you hope you don't become overwhelmed by a powerful one or too many in one region. It is also just so much fun rotating the monster's health down to zero. Again, this is a simple mechanic, but so rewarding. I know I used the word simple a lot in my review, but I mean that as nothing but positive, because even though a game may have beautiful simplicity it can still present a challenge to defeat.

Review of the Expansions

The Wizard's Tower adds a very powerful ally to the game - Thalgar the Wizard. In exchange for one of your towers, you construct his tower instead and with it a formidable deck of spells (as long as his tower still stands). You will need all his tricks too, because in addition to a horde of low level Imps, (which can be summoned by other monsters), you have many new monsters to deal with...some of which cause fire damage. You also have six Mega Bosses added to the game (only playing with three per game), which have non-predictable movement and devastating abilities.

The Dark Titan adds the ultimate villain - Agranok. Agranok comes with several difficulty cards, so you can pick how difficult you want him to be or randomly choose and let the fates decide! There are also some support tokens and a Cavalier who will ride around to help you defeat monsters approaching your castle. As powerful as Agranok is, you also have to watch out for the Elite Monsters he brings with him. These monsters require you to roll a die before attacking them. If you roll a 1 or 2, you fail and waste the card you were going to play. Hope you have lucky dice rolls, because a one in three chance you'll fail is very high.

Lastly, Engines of War provides you with physical tools to defeat your enemies. Instead of having resources randomly mixed in your Castle Deck, you now have a very small Resource Deck and an engineer who can fortify a crumbling Castle, attach weaponry to a Keep, and lay out some strategics devices to slow and cripple your enemy. However, if you focus too heavily on the resources, you will find they quickly dwindle and you disappear, perhaps when you need them most. However, don't think that you have the upper hand now, the Monsters have their own barbaric weapons including battering rams, siege towers, and war wagons.

The base game of Castle Panic is truly a family game. It is not winnable 100% of the time, but it is an easier game and a more forgiving game. I would describe it as the quintessential family cooperative game. Yes, there are variants - 1. Most monsters killed is ultimate winner, 2. One person plays as the monsters, and 3. Starting with fewer castles, but even with all these, it is still just a family game, and more serious gamers will bore of the game quickly. Thankfully, the expansions elevate this game to a real gamer's game. They add depth, replay value, and new difficulties. They also are great in that you can mix and match them. Want to just fight Agranok? Only add The Dark Titan. Want the full experience? Add them all and see if you can survive. Castle Panic has been around eight years, but in the past two years has added two expansions. I'm curious if this is the end of the line or if there will be more in the pipeline. Either way, it is a game that has a proud place on my shelf and one I still look forward to playing whenever someone suggests it.