Crowdfunding websites like Kickstarter have revolutionized the way that some businesses operate. Where companies used to have to gamble with production and worry over whether or not they had produced too much of a product, crowdfunding has taken some of the guess work out of that. Instead of solely investing the business' own money into a project, a business can now turn to Kickstarter, raise money from thousands of personal "investors," and produce a quality product. But what does the investor get? It depends on the company, but game companies reward these investors with a reduced game cost, higher quality game components, and/or exclusive content others won't have access to. Few game companies have utilized Kickstarter better than Gamelyn Games with their Tiny Epic game series. Today, I am reviewing Tiny Epic Galaxies. 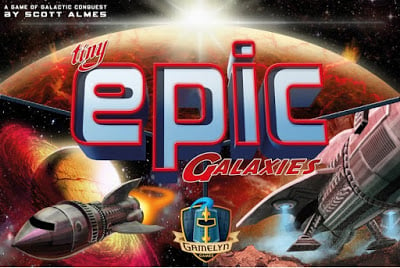 Tiny Epic Galaxies is a space-themed game, where your galaxy is overpopulated and you are looking to colonize more planets, acquire more spaceships, and expand your influence. It is designed for 1 to 5 players and billed for ages 13+. The age rating seems a little high for me, and I think children 10+ could easily play this game, perhaps even younger. The game is "micro" in size and playtime (approximately 30 minutes) and can be described as a dice-combo game, wherein you roll dice to determine your actions. The price point for this game is $25, and that will get you the base game. There is an expansion called Satellites and Super Weapons that costs $8 with $2 shipping, but this is not required to play the game. It just adds a new wrinkle to it. For the sake of this review, I'll focus on only the base game. Let's begin with the setup. 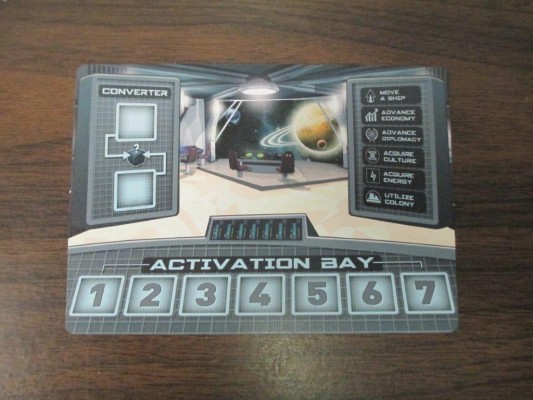 The Control Mat, pictured above, is put in the middle for easy access by all. This is where your dice go after you roll them, and it also contains a reminder guide on what each die does. We will discuss this momentarily. Each player is then dealt a Galaxy Mat (seen below) in one of five colors (red, blue, yellow, green, and black) and the corresponding colored pieces which will be placed on your home galaxy. Your initial resources include 1 Culture and 2 Energy. Culture, which is tracked on the dial on your Galaxy Mat. The most you can ever have of these two resources is seven. You also begin the game with 2 Ships and the ability to roll four dice. As you increase the level of your Empire, you unlock more Ships (up to four), gain the ability to roll more dice (up to seven), and score Victory Points. The first one to 21 Victory Points is the winner. Everyone then gets two Mission Cards, looks at them, and keeps one. The last thing you do is deal out Planet Cards within reach of everyone. The number of Planet Cards dealt is equal to the number of players plus two with a maximum of six in a five player game. 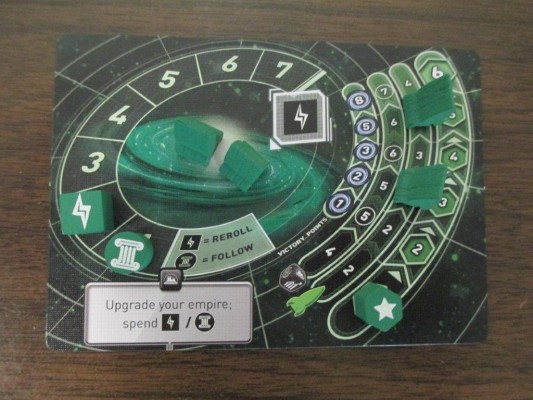 After all the setup, it's time to begin the game! It is recommended that the youngest player gets to go first, but you are welcome to come up with another way to decide who goes first. Player One grabs four dice and rolls them. The symbols on the dice allow you to Move a Ship, Acquire Energy or Culture, Advance Colonization of a Planet with either Diplomacy or Economy, or Upgrade Your Galaxy/Utilize a Colonized Planet you now own. Dice rolls play a big factor in whether or not you win this game. However, if you have bad luck with the dice, you are allowed one free re-roll of a die per turn and afterwards have to spend one Energy per die re-roll. Another way you can avoid bad luck with dice is to copy an opponents move or Follow them. For example, if you just can't seem to roll the symbol to Upgrade Your Galaxy, if someone chooses to upgrade theirs, you can spend one Culture and take the same action they take. The ability to Follow also helps keep all players engaged during everybody's turn, not just their own. 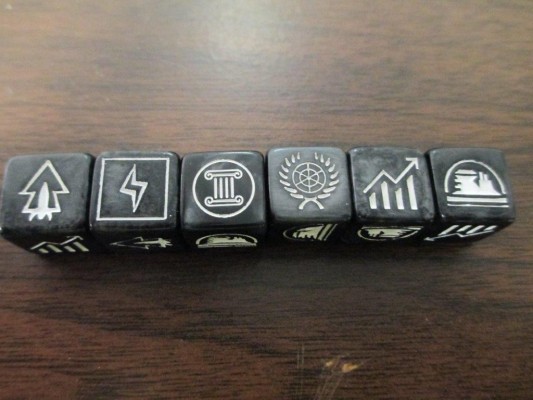 There are several methods you can take to get to 21 Victory Points and all are equally valid. The first time we played through the first thing I focused on was advancing my own galaxy, because you gained more ships and dice. However, this only gets you 8 Victory Points, so you'll have to Colonize some Planets too. The Planets can either be landed on or you can attempt to Colonize them. Landing on them gets you an immediate benefit, like acquiring a resource; dice manipulation; or ship manipulation. Colonizing earns you Victory Points, but you don't get any perks until you Colonize the planet and claim it. Then, you can land on it for the perks and no one else can. 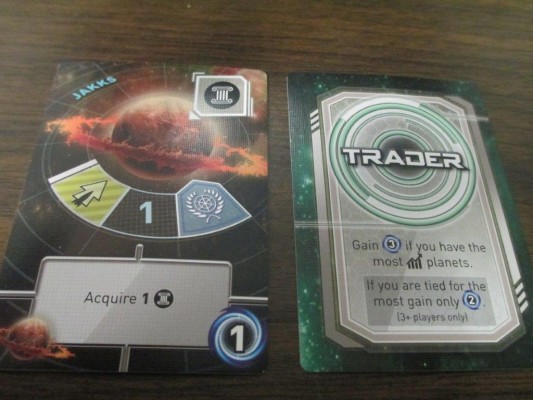 Themes in game are very important, and I would go so far as to say as they are critical. You can have a game with great mechanics, but if the theme is lacking or clunky, you end up feeling like you are just rolling dice or playing cards for the sake of winning. Don't get me wrong. Winning is important in games, but the experience is just as, if not more important. With Tiny Epic Galaxies, you can pretend you are an alien race trying to take over the universe, one planet at a time! Another aspect I like about this game is the portable nature of it. The box itself is approximately 4.75 inches x 7 inches, so unlike other games, you don't need a whole table to spread out all the pieces and play the game. This means that you can take it with you and play it on the fly, i.e., in a restaurant while waiting on food. The quality of the game components are also top-notch. The cards are linen or linen embossed as opposed to cardboard. The game tokens are wooden, stamped, and laser cut to enhance the theme. Even the dice are beautiful with their black marble look that resembles staring at the night sky. Given the compact nature of the game, my wife wishes the pieces were magnetic instead of wooden, so you could play it in the car while on travel, but I imagine that would have increased costs exponentially. Overall, I'm HIGHLY impressed with this game. It may look tiny, but the amount of strategy, decision-making, and replay value make it a game that will come out on game nights many times over!

Tiny Epic Galaxies was provided to me for free by Gamelyn Games in exchange for an honest review. Also, be sure to check out the next Tiny Epic game on Kickstarter called Tiny Epic Western. It combines Poker, dice, and worker placement. And the funding level so far has already unlocked some amazing rewards and also made the game infinitely better.

See all the Favorite Games for Family Game Nights reviews here.
Purchase this game through our Amazon link and support CatholicMom.com!