Kerala is a state in the country of south India. There are over 10,000 religious festivals held here each year, which usually involve fireworks and elephants. Yes, elephants. Kerala has the largest domesticated population of Indian elephants (approximately 700), which are owned by both temples and individuals. It is for this reason that the elephant is state animal of Kerala and also the emblem of Kerala's government. Thames and Kosmos recently published a game called Kerala in which up to five players are trying to build the most elegant and colorful platform for their elephants. The game takes approximately 30 minutes to and retails for $40. 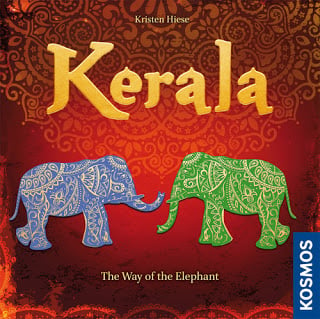 When I first opened this box and was reading through the rule books, I thought that this was essentially Lanterns with elephants. You are placing colored tiles. You are preparing for a festival in an Asian country. On the surface, it seems very similar, but once you start playing, you realize that the game play is much different. For starters, you are not playing tiles to a communal grid. You are instead making your own grid, thus making the player interaction minimal. When the tiles come to you, you are going to look at them and then look at your board. The first decision you have to make: which colors can I place that are next to tiles I have with elephants on them? You also have choices (unless you are the last player), but some tiles will work better than others for you. If you have multiple good choices, then you can take the time and see what your opponents can optimally use and what would be a negative for them. That is the bulk of the player interaction. Other than that, it is essentially multiplayer solitaire, and I don't say that as a criticism.

What I like best about the game is the puzzle-like nature of it. Yes, you can place your tiles anywhere (as long as it is next to an elephant), but you don't always want to, because it could create multiple areas of the same color, which is bad. You then have to decide: do I want to use one of my two passes? Do I want to build over a tile I have already played and negate some points? Or am I just going to be stuck playing this tile and losing two points at the end of the game? I also really liked the special ability tiles. The game could have been very unforgiving and what you get is what you get, but instead there are two tiles that let you fix your board at multiple times throughout the game. One lets you move your elephant to a more strategic position, so he isn't color-locked. The other lets you move a tile, so that you can try and consolidate multiple areas of color into one area.

The game is frustrating to play (in a good way). You think everything is going well, and then you get a string of tiles that you don't want to play. This means each decision you make matters, and sometimes you are going to have to sacrifice a three-point tile, just so you can clean up your area a little bit. I also like that the player count is five players, as opposed to four players. This means I can get the game to the table more often. Add in the simple game play and quick playing time, and you have a winner for both children and new gamers. 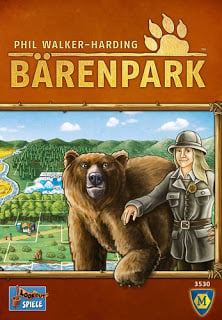 Phil Walker-Harding is one of my favorite game designers. I count no fewer than three of his games in my collection. The reason for this is because he makes family-friendly games that have a bit of crunch to them. These are exactly the types of games that my game group and family like, so its a perfect fit. Therefore, when I heard he had a new game (Bärenpark) coming out, I knew I had to have it. Bärenpark is a game for 2 to 4 players, ages 8+. It takes approximately 30 to 45 minutes to play and retails for $42.

When Patchwork first came out, my wife and I played that game like crazy. It had a beautiful simplicity to it, and it was very fulfilling trying to complete your quilt. However, the more I played it, the more repetitive the game grew. I also felt like there was too much randomness in the game, and that if the tiles weren't lining up in your favor, then you were forever playing catch up. Therefore, I was always looking for a game with a similar feel, a bit more strategy, and one that plays more than two players. Then, along came Bärenpark.

Bärenpark takes the idea of tile-selection and tile-placement, and adds some twists to it. For starters, you aren't buying the tiles, but instead only gain them by strategic placement of your starter tile and subsequent tiles. So, while you may want all those high-point tiles, you might find that they don't quite fit the way you want them to in your current park layout, so you might have to take a slightly less valuable tile. The game is also a bit of a race in that you want to complete your park areas more quickly so that you get the most valuable bear statues. Unlike Patchwork, your board is not identical to your opponents. You will each have the same icons and number of icons on your board, but they will be slightly so different, creating a bit or asymmetry and replay value, in that your park will never turn out quite the same.

The theme of this game is a bit silly, but to its credit, it doesn't shy away from that. Instead, it embraces that in both the art and the rulebook wording. Speaking of the art, I really like the artwork in this game. There are subtle artistic differences in the tiles (even the ones that are the same shape and size) that creates a fun and wacky picture when complete. What I like best about this game, though, is that there are really two ways to play this game. You can play the basic way, which is the way I have been talking about, which is great for beginners and younger people, or you can play the advanced way. The advanced way adds achievements to the game and gives people goals to shoot for, like three tiles with polar bears in your park. With ten different achievements and only three used each game, this adds a lot of replay value to the game and makes it an even thinkier puzzle to solve.

I can see this game being in my collection for a long time. It is family-friendly, gamer-friendly, can play more than two, and is just plain fun. Highly recommended!