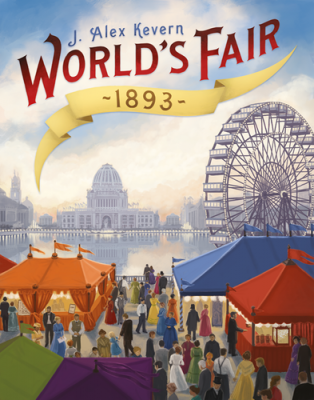 The World's Fair of 1893 was held in Chicago to celebrate the 400th anniversary of Columbus's 1492 arrival. It was also used to demonstrate Chicago's revival after the Great Chicago Fire of 1871. It took up over 600 acres of lands and contained over 200 buildings, which contained food, art, technology, and entertainment. More than 26 million people visited the fair. One of the greatest sights at the fair was the Ferris wheel - an original invention meant to rival the Eiffel Tower, which was the showpiece of Paris' World's Fair in 1889. This Ferris wheel helped save the Chicago World's Fair from ruin and it serves as the game board for one of Renegade Game Studio's recent games - World's Fair 1893.  The game is designed by J. Alex Kevern and plays 2-4 (ages 10+). It sells for anywhere between $25 and $40, depending on where you shop. 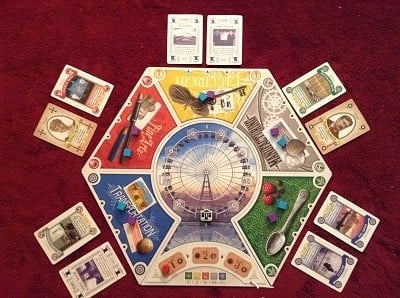 1. Place the central board and top wedge together to form a Ferris wheel, making sure both sides match the number of players. (In a two-player game, there will be nine spaces to move on the Ferris wheel.)

3. Place the Ferris wheel car on the central board covering the start space and the round marker at on the far left space at the beginning of Round 1.

4. In a two-player game, remove one midway ticket card five main exhibit cards (one from each of the five categories mentioned above). Then, shuffle together all the midway ticket, main exhibit, and influential figure cards.

5. Place two cards from this deck next to each of the five area tiles.

6. Give each player 22 supporter cubes of one color (purple, blue, white, or yellow), and have each player place one cube on each of the five area tiles.

8. Randomly determine a start player and give each player a start bonus card, which corresponds to their player number. 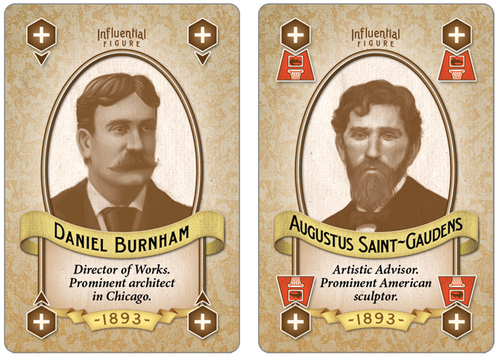 The game takes place over three rounds with a scoring phase occurring after each round. A round ends when the Ferris wheel card makes it around the central board one time.

1. Place a supporter cube in one of the five area tiles.

2. Play any influential figure cards you may have collected from previous turns and perform the action on the card.

3. Collect the cards from the area tile you placed your supporter cube, and place them face up in front of you. For every midway ticket card you claimed, move the Ferris wheel car one space.

4. Add three new cards to game board - 1 in front of the area tile where you just placed your supporter cube and 1 each in front of the next two area tiles (assuming they are not at their maximum card limit). 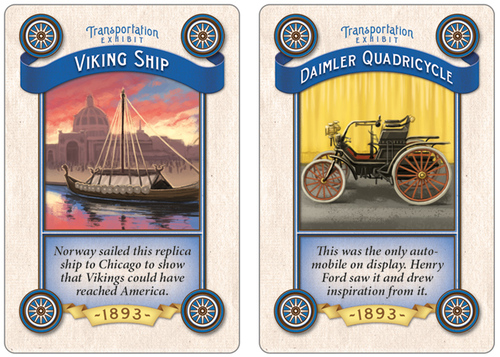 [Tweet "A board game on a Ferris wheel? @stuartsstudy explains why World's Fair 1893 is a fun family game!"]

This game is a Euro game at its core. You put cubes on a board, execute an action. The three game mechanisms for this game are area control (having the most supporter cubes on an area tile), set collection (having a variety of exhibit approval tokens i.e., one of each color to score fifteen points as opposed to five of one color to score five points), and card drafting (collecting the cards in front of the area tile where you placed your supporter cube)  So what makes this different from other Euro games? I would say theme and the approachable nature of the game. Let's look at each of those individually.

Let's start with the theme. A lot of themes in Euro games feel like they were pasted on and you are only focusing on the mechanics. World's Fair 1893 is steeped in theme, and one that makes sense! The game board is a giant Ferris wheel, which was the showpiece of the Chicago World's Fair in 1893. The main exhibit cards are beautifully illustrated and contain fun facts about the exhibits. For example, did you know that "Norway sailed a replica ship to Chicago to show that Vikings could have reached America"? The midway ticket cards also contain attractions that people were able to attend. Lastly, the influential figure cards contain several important people, like Daniel Burnham who was the Director of Works for the World's Fair. The only complaint I have with the theme is that I wish there had been more unique influential figures as opposed to multiples of the same ones.

The next thing that makes this game better than other Euro games is its approachable nature. I feel like I've said this about a few games recently, but it is easy to learn and quick to play. (Maybe my group just tends to steer towards lighter games.) I would say this game is even easier to learn than Stone Age, which until World's Fair 1893, was my go-to for teaching Euro games to people. World's Fair 1893 also takes half the time to play (30-45 minutes compared to 60-90 minutes) compared with Stone Age. However, this ease of learning and playing doesn't make the strategy and decisions any less tense. For example, if someone played in the Agriculture area the turn before you did, then there would only be one card up for grabs in that area on your turn. However, you might really need to go there to get a specific card or re-gain majority. So do you go to that less than desirable spot and give up potentially more cards and/or the chance to tie/gain a majority in another area? TOUGH DECISION!

Euro games are usually tough to bring to my game group, because we are all parents with young (sometimes very loud children), so we have to play quicker games usually. However, this is a quicker Euro game, and because of that it has received the most playing time. The first time we played through it, we were more focused on getting used to the game and well, winning. (Because who doesn't want to win?) The next couple of times though, we slowed down a little bit and appreciated the art, factoids, and theme of the game. So if you are new to the hobby or haven't found a Euro game to introduce to your group yet, look no further than World's Fair 1893.