Family Games: Colonize the Galaxy or Blow Up the World!

Card games have made leaps and bounds in terms of strategy, game play, and art. It is amazing what kind of experience you can have with approximately 100 cards. You can colonize a whole galaxy or you can blow up the world . . . all of this within the span of 15-30 minutes. Today, I would like to tell you about two such games.

The jump drive is the latest technological breakthrough in space technology. With this invention, we now have the ability to travel to new worlds, develop new technologies, and build our own space empire! Jump Drive is a game for 2 to 4 players, age 13+. It takes approximately 30 minutes to play and retails for $25.

1. In the middle of the table, place Survey Team cards equal to the number of players.

3. Put the Victory Point (VP) chips and Explore markers nearby.

Game Play - A game typically lasts six or seven rounds. Each round, players simultaneously place cards face down or place place Explore markers. The cards are then revealed and paid for, thus adding the card to your empire. Each player may do the following:

1. Place one Development (diamond) card. Discard one fewer card than the black number in the diamond to pay for it.

3. Place one Development and one World card. Pay the full cost for these cards, and do not draw a card.

4. If you choose not to place any cards, you may take an Explore marker and draw some extra cards according to the rules on the marker.

5. Check to see if anyone has a minimum of 50 VP. If not, draw as many cards as your income and begin the next round.

I love the game universe of Race for the Galaxy and the dice version Roll for the Galaxy. As someone who loves space and science fiction, there is just something satisfying in these games. The fun that comes from building your own unique space empire each game brings joy to my nerdy soul. However, not everyone wants to commit that time and energy to learning the game and the many expansions. This is where Jump Drive comes in! Jump Drive is set in the same universe and offers a quicker and simpler game play than Race and Roll. With each game lasting around 30 minutes, you have a chance to introduce people to this excellent universe and hopefully eventually get to teach them the two games that inspired this one. Alternatively, you also have a quick game that scratches the same itches that Race and Roll both do and can offering a satisfying experience if you don't have time for the other two. Highly recommended!

[tweet "Two card games you can play in less than 30 minutes. #familygamenight with @StuartsStudy"] 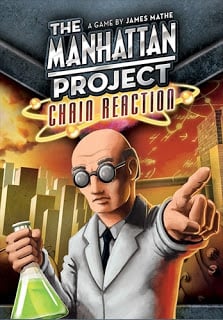 The world is on the brink of war, and many nations are jockeying for power. As the Minister of War of your nation, you have been assigned to build atomic bombs to combat rival nations. You have the technology, but we won't talk of how you acquired it. Now, you just need the right people and materials to complete this task. This is The Manhattan Project: Chain Reaction (TMP: Chain Reaction).  TMP Chain Reaction is game for 1 to 5 players, ages 12+. It takes approximately 30 minutes to play and retails for $15.

1. Separate the Resource cards into into piles of Yellowcake value (one, three, five).

2. Place the Landmark cards face-up in a row next to the Resource cards.

3. Place the Bomb Loaded cards in a stack next to the Landmark cards.

4. Shuffle the Bomb Plan cards and deal a number face-up equal to the number of players.

5. Shuffle the Industry cards and make a face-down deck. Then, deal each player five cards face-down.

Game Play - Every player will get the same number of turns. On your turn, you will play your cards in a linked series, with previous cards activating the next cards. Your goal is to create Bomb Plan or Bomb Loaded cards. At the end of your turn, you may keep all Yellowcake, Uranium, Bomb Plan, and Bomb Loaded cards for future turns and scoring. Draw back up to five cards, and play passes to the next player. The first player to 10 megaton of bomb points triggers the end of the game. Complete the round and the War Minister with the most power wins.

The core feature of this game is the multi-use card. Are you going to use the card for labor or for its ability to produce yellowcake, specialized people, or another ability? The chaining mechanism of these cards is a fun little puzzle that you have to try and piece together before your opponent. Will you make the optimum use of your cards quicker than your opponent? Or will you be left in a mushroom cloud of dust? The Manhattan Project: Chain Reaction is a small-scale version of The Manhattan Project. It has a tiny footprint on the table, has some take that to it (but not too much), and scratches the same itch as its big brother with a cheaper cost and quicker play time, making it a nice little filler game for family and friends. It is also a good way to introduce people to The Manhattan Project family of games.