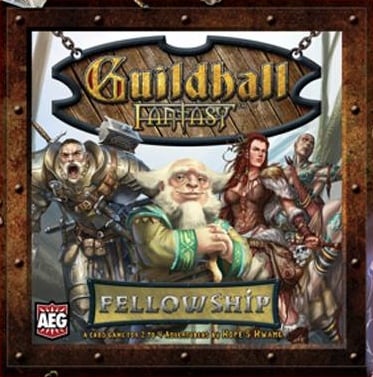 Guildhall Fantasy is a re-theme of the game Guildhall. It currently comes in three versions - Fellowship, Alliance, and Coalition. The boxes themselves are tiny in nature, which a lot of gamers don't like, but you can buy a bigger box (Box of Holding to be specific) to put four of these games in. This had led to speculation that there is one more game in this series on the way. Each game is designed for 2-4 players, ages 14+. They take roughly 30 minutes to play and retail for $28. The three games play almost identical in nature. The biggest difference is the characters available in each set. Fellowship (Bard, Druid, Fighter, Monk, Ranger, and Sorcerer), Alliance (Assassin, Marshall, Psion, Shaman, Spellblade, and Wizard), and Coalition (Artificer, Barbarian, Cleric, Rogue, Paladin, and Warlock). Today, I will be focusing on Guildhall Fantasy: Fellowship. Let's talk about the setup.

1. Shuffle the 120 Profession cards (Bard, Druid, Fighter, Monk, Ranger, and Sorcerer) together to create a deck.

2. Shuffle all of the Victory Point (VP) cards and deal five face up in the middle of the table to form a line. Set the rest of the VP deck nearby.

3. Place the VP tokens in a pile in the middle of the table.

4. Deal each player nine Profession cards. Then, the first player discards as many cards as they want and draws back up to nine cards. After that, they play three of their cards to their right. This forms their Guildhall. (Notes: No cards can be duplicates, meaning same name and color, and groups of the same Profession are referred to as Chapters.) Each player then follows the same actions in this step, and the game is ready to begin.

You may take any two of the actions below, including the same action twice.

2. Discard any number of Profession cards from your hand and draw back up to six.

3. Buy one VP card from the center row. VP cards are bought by cashing in completed chapters (one of all five colors of a Profession in your Guildhall, i.e., one red, one blue, one yellow, one green, and one purple Monk card. (Note: Some VP cards give you solely victory points. Other VP cards give you points and an extra move. For example, the 7 VP card gives you seven points and allows you to take two more actions.0

4. The game ends when someone reaches 20 victory points.

The characters in this game are beautifully illustrated and detailed and they are what make this game really stand out on a table. The mechanics of the game are simple, but the execution is a bit complex. By this I mean, it's a simple hand management game, but it takes several times of playing to get used to what all the characters can do. The real trick of this game is deciding when to play which card, and that is what makes this game easy to learn, but difficult to master. Of all three sets, I liked the characters in Coalition the best, because they felt the most traditional of fantasy characters. Fellowship was a close second and Alliance was a distant third. What most interests me about this game is that you can take characters from each of the three sets and create your own Guildhall Fantasy adventure. I have also heard talk of being able to combine the game and make a super Guildhall Fantasy, but I wouldn't recommend that unless you have mastered all three of the games first. This is a perfect introduction to hand management and set collection with just enough "take that" action to make the game exciting but not annoying.

These games were provided to me for free by Alderac Entertainment Group in exchange for honest reviews.