Press-your-luck games tell you a lot about the type of person you are playing with. Some people are a bit more cautious and will only take minor, well-calculated risks. Other players are a bit more daring and will take wild chances that sometimes have only a 20% chance of working. When it works, they are brilliant. When it doesn't, they lose it all.

Today, I would like to tell you about two press-your-luck games. The first, Tumult Royale, plays 2-4 people, ages 10+. It takes approximately 40 minutes to play and retails for $40. In Tumult Royale, you and your opponents are greedy nobles trying to erect statues of yourself throughout the kingdom. To do this, you must take bread, marble, and tools from the starving peasants. However, the peasants have had enough and will only let you take so much! Take what you can, but remember the greediest of you will be punished! 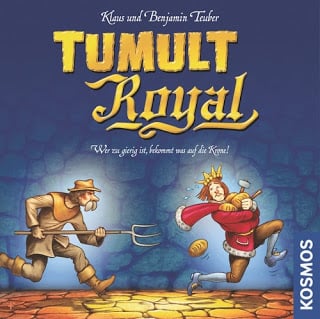 Tumult Royale is a fun game of controlled greed. You want to be able to take as many resources as you can so that you can build the most statues, but you also don't want to take so much that the peasants revolt and you end up losing nearly all of the resources you stole, I mean "worked so hard to get." I don't normally gravitate to games with a real-time element, but the mechanic in this one was necessary and didn't feel like it dominated the game. I really liked the theme in this game too. It did not feel pasted on, and it was silly/nonsensical enough that it still makes me chuckle just thinking about it. Seriously, a race to build the most statues of yourself while stealing from your "loyal subjects?" Those peasants would burn you alive after the first handful of statues went up. You'd never be able to erect all 25! Lastly, I'd like to comment on the component quality. Of the several Thames and Kosmos games I own, the components have always been pleasantly illustrated, of good quality, and more than just generic wooden cubes. This game is no different. I really enjoyed this game and it scratches an itch I didn't know I had. I try to play this game with my regular group or family at least once a month, as it is fun and frustrating at the same time. It also teaches a good lesson to kids about risk management and knowing when enough is enough. 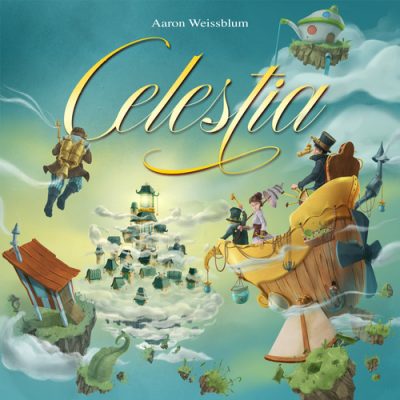 I've come to the realization that I love games more than my wife does. I could learn and play a new game every week for the rest of my life, and that would be awesome. My wife, however, does not like learning games that often, so when I teach her a game, I have to make sure it clicks on a lot of different levels if I want it to ever see the light of day again. One such game we recently played that clicked for her was Celestia from Quick Simple Fun Games (My wife loved the name of that company, so it was already off to a good start.) Celestia is a game for 2-6 players, age 8+. It takes approximately 30 minutes to play and retails for $30. The game takes place among the clouds. You and your fellow adventurers will embark on a journey to explore the various cities of Celestia and collect as much treasure as you can.

The art in this game is very beautiful to behold, both on the front and the back of the cards. This makes playing the game even more appealing. The aircraft is also ridiculous, in a good way! It would have been simple to just have players move their pawns along the different cities by themselves. Instead, they created a gorgeous 3-D aircraft with a spinning propeller just to move pieces. Simply decadent! The game play itself is fun and keeps all players engaged throughout each turn. The game is a beautiful mix of press your luck and reading your opponents. Do you think your captain has the cards to keep the aircraft afloat, or do you think he is going to crash and you need to get off ASAP. You'll have to figure that out each turn.

The only thing I didn't like was the luck of the draw with treasure cards. Within the early cities, there are primarily values applicable to the cities. However, there is also one to two higher value cards, which you would find in later cities. Therefore, someone could get lucky for bailing out. Yes, it gives the game imperfect information on what could be in each deck, but it does add a random element, which I'm not overly keen on. I look forward to the coming expansion for this game and can't wait to see what elements it adds to it.