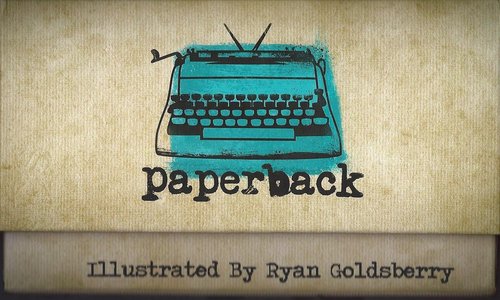 When I was in high school and parts of college, my go to game was Scrabble. It's nerdy, I know, but I always enjoyed the word game, seeing how many two-letter words I could make, and trying to get a new high score. Anything over 400 was considered a success, and one time I broke 500. It was this game that sparked my love of word games and that eventually led me to the game Paperback. Paperback is described as a novel deckbuilding game (very punny) for 2-5 players ages 8+. It retails for $33-$35 and takes approximately 45 minutes to play. In this game, you are a novelist trying to complete paperback novels for Fame. The person with the most Fame at the end of the game wins. Let's set up the game for two players.

[Tweet "Review of 'Paperback' word game by @stuartsstudy: recommended for ages 8 and up!"]

3. Shuffle the Common Cards and deal out four. Then, splay them out face-up on top of the Length Track.

4. Finally, sort the Letter and Two-Letter cards into piles by price (2 cents through 10 cents), making sure to combine the 8, 9, and 10 cents cards. Shuffle each of the seven piles and place them face-up in the center of the table to form The Offer. Take the top card off each pile and place it below its respective pile (except for the 2 cents pile) to form the Alternate cards. 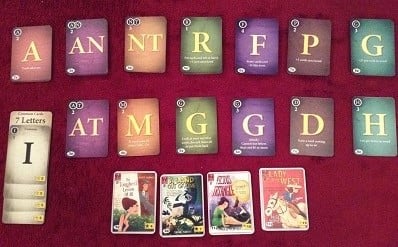 Game Play - A turn consists of the following

2. Create a word - Form a word (no proper nouns, names, or places) using any combination of the five cards in your hand and the topmost Common Card. (Notes: You do not take the Common Card, it is just there to help you form words.)

3. Check the word length - Count the number of letters in your word. If the word is equal to or longer than the highest number on the Length Track, you get to claim the Common Card and make it part of your deck.

4. Resolve any abilities - Some letters have special abilities on them, like extra points for playing all your cards.

5. Score word - Add up all the scores from letters in your word.

6. Buy cards - Using your score to purchase visible cards in The Offer. (Note: You can buy multiple cards, including Letter, Two-Letter, and Fame cards.) Purchased cards are put in your discard pile and unspent money does not carry over to your next turn.

7. Discard cards - Put all cards from your word and hand, including any cards gained this turn into your discard pile.

8. Draw 5 cards - Draw 5 cards, plus any additional cards granted by abilities in your last word, to form your next hand. If you run out of cards to draw, shuffle your discard pile and draw up to your hand limit.

Play then continues to the next player in clockwise order.

If you are like me and love word games, then you'll want this game in your collection. It's has a clever theme and the art and color scheme are vibrant to make it stand out on the table. There is also a lot of replay value with the different cards you can build into your deck, and a lot of variability with the different expansions and modes you can play. For example, there are several player powers that grant each player a unique ability and there are theme cards that give you a goal to shoot for when forming words. There are also little cubes included in the game which you can use to award players who help you form a word from your cards or as discount tokens if people don't buy cards from The Offer. There's also even a cooperative mode where all the players work together to buy all the Fame Cards before it gets five cubes on it. Be sure to check out other games by Tim Fowers - Burgle Bros. and Fugitive as well as the "successor" to this game Word Domination. It is a combination of word game and Risk and is currently on Kickstarter.

This game was provided to me for free by Fowers Games in exchange for an honest review.