Family Games in Under 20 Minutes

The tabletop hobby has been growing what seems exponentially these past few years. With this growth comes an increase in the consumer's appetite. They want bigger and better games with lots of dice, cards, miniatures, etc. Now, I'm all for getting your money's worth, but I think a lot of gamers (myself included) miss out on smaller, lesser-known projects sometimes, because of this insatiable appetite.

I'd like to take the time today to tell you about a little game currently on Kickstarter called Unreal Estate. Unreal Estate is a card-drafting, set collection game for 2-4 players. It takes only 20 minutes to play and can be yours for a pledge of $18. 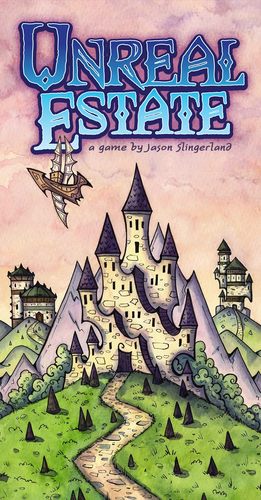 This is a simple game to setup, learn, and play, but it is one that makes you think the entire time. The reason for this is because there is a touch of press-your-luck in deciding exactly when to play your cards to score. Do you wait one extra turn and hope that more of the cards you need show up, or do you take the points and run because they might not be there the next turn? This is the struggle you'll face every turn. I generally take the points and run, but I'm a "bird in the hand" kind of guy.

Apart from the beautiful simplicity of this game, the game itself is simply beautiful. Each card is brilliantly done and calls on different fantastical creatures, including dwarves, elves, orcs, and goblins. The artist, Corinne Roberts, has an artistic style that is Tolkien-esque. For example, the Halfling House makes you feel like you're in the Shire with Bilbo and Frodo. Each card has a unique flavor to it and an amazing amount of detail that shows special care went into the creation of each card. Both the buildings and their backdrops invite you to play the game again and again, just so you can admire the artistic creations she produced.

The game is currently on Kickstarter, is fully funded, and has unlocked a few stretch goals! However, there are some more awesome stretch goals waiting to be unlocked the more money they raise. So if you are a fan of fantasy, quick card games, and beautiful art, you'll want to go back this game!

Learn more about how to set up and play this game. 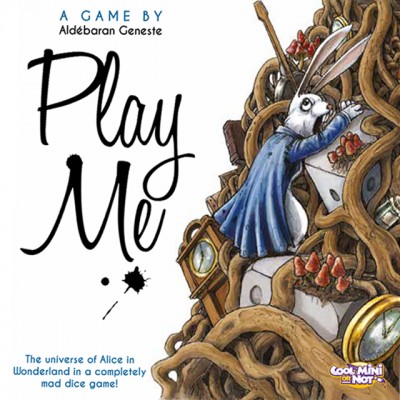 Alice's Adventures in Wonderland and Through the Looking Glass are two of Lewis Carroll's best-known works. Walt Disney thought so highly of the books that he made an animated film out of it in 1951. Disney was not the first to adapt this book, though; it has been made into numerous films, comics, live performances, music, etc. One of the latest products to draw inspiration from Carroll is a game called Play Me from Cool Mini or Not. Play Me is a real-time, dice-rolling game for 2-6 players, ages 14+. It retails for $24.99 and takes approximately 10 minutes to play.

Real-time games are hit or miss with people. Some people like them because they can make quick, accurate decisions and a real-time gives them an advantage. Other people like to take their time and carefully follow a strategy. Luckily, you can play this game either way. Instead of everyone rapidly rolling, you could just have everyone roll at the same time, make a decision simultaneously, and then everyone re-roll. Doing it this way helps level the playing field along ages as well. Overall, I like the theme of this game and the simplicity of learning and playing the game. The game also provides a bit of asymmetry as everyone has different advantages and disadvantages to their character. This creates a different game play experience, especially if you rotate the characters around and test them all.

The game is portable, which I like, and the components are of good quality. The price is a little high, though, and it feels like it should only sell for $15, not $25. Unfortunately, what I liked the least was the artwork. It was a little too dark for my taste. I get that they wanted to make this game appeal to a bit of an older audience and not make it feel like a child's toy, but I think they missed the boat. They could have made good artwork that would appeal to kids and adults without it being creepy, like this art is. I could seen teens and young adults liking this artwork though, so if you have teens in the household, give the game a whirl. They'll learn about literature while playing a game!

Learn more about how to set up and play this game.

[Tweet "2 family #games you can play in 20 minutes or less! Reviews by @stuartsstudy"]