Two tiny games with quick setup, fast game play and not too many pieces: that's what micro games are all about. Which of these would you choose for your next Family Game Night? 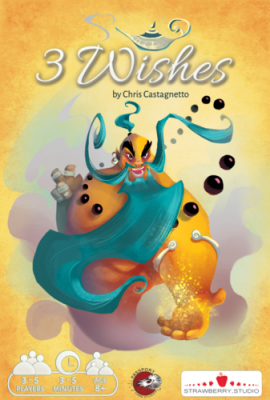 The notion of a wish-granting genie in a lamp is a centuries-old tale. It has been popularized in American culture by I Dream of Jeannie and Walt Disney's Aladdin. These as well as the original 1001 Arabian Nights have led people to dream of finding a magic lamp and having their every desire come true. Well, with the game 3 Wishes from Passport Game Studios, you can now experience the next best thing! 3 Wishes is a game for 3-5 players, ages 8+. It takes 3 to 5 minutes to play and retails for $10.

3 Wishes is the ultimate definition of a micro game. It has only 18 cards. It is very short to set up and explain the rules, and it plays even quicker than that. This is a very fun game and one that you can play with kids, new gamers, experienced gamers, etc. I originally introduced this game to my gamer group as an appetizer before longer games, but we ended up playing this game so many times that we never got to the game we were supposed to play. If you are looking for a game that has a mix of memory, strategy, and general fun, I recommend you add this game to your collection. I thoroughly enjoyed it and can't wait to play it with my son when he gets just a little bit older. Now, I only wish that I won this game more often. 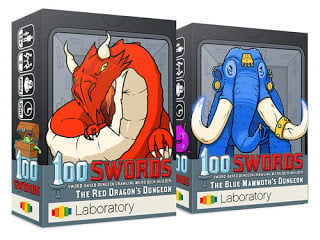 You grew up in a small village your whole life. Every day was more drudgery and more of the same. Lately, you have been seeing your friends coming back with treasure and telling tales of dungeons, dragons, and even mammoths! (Whatever that may be) You grow weary of life passing you by and want to experience this adventure as well. One day you finally decide to leave this town, before you can talk yourself out of it again. Armed with an old pair of boots and a crappy sword, you embark on what you hope will be a quest for fame and fortune. This is 100 Swords! 100 Swords is a micro-deck building game for two players (with the potential for four players), taking approximately 25 minutes. Season One base decks retail for $15 and booster packs for $8. Season Two is currently on Kickstarter, so let's learn how to play the game!

Deck building games are one of my guilty pleasures when it comes to games. If there is a new deck builder out there, I want to try it. 100 Swords takes the mechanism, gives you multi-use cards, adds a memory element to it, and places it in the genre of a dungeon crawl to boot. This is a lot of bang both for your buck and for a deck of cards no bigger than a poker deck. Another positive for me are the graphics. They have an early video game system feel to them, which I like, and the symbols on all the cards are big enough to help you easily understand what the card can do, without being too big that it detracts from the artwork.

This is Season Two for the game 100 Swords. In Season One, we received two decks, Red Dragon and Blue Mammoth, and four expansions/Dungeon Builder Sets. Season Two is giving us two more decks, the possibility of another four expansions, and a multiplayer option (more on that later). With the ability to mix and match the base games and the expansions, This gives you loads of replay value and the ability to customize your game. The game is also super easy to learn and plays in under 30 minutes. This is both a positive and a negative for me. On the plus side, you can play a game or two during your lunch time. On the negative, for me at least, my wife wishes the game were a bit longer, because she feels like whenever she is getting into a game, it ends.

The only knock I had about this game came from Season One, and that was that the game only supported two players. Unless it is just you and your wife, or you and a friend, who play games, you would have to leave your family/friends out unless you had multiple decks and did it tournament style or something of that nature. The Multi-User Dungeon (M.U.D. for short) expansion pack now allows you to play the game with three or four players (assuming you have at least two decks of cards).

With a low price-point, small footprint, easy game play, quick playing time, and solid graphics, I can think of nothing wrong with this game. Season Two is currently on Kickstarter and I invite you to check it out. It is about halfway through its campaign, and while fully funded, it needs your support to make it better. I really appreciate/admire the way they are doing their campaign. Most campaigns set dollar figure goals to reach to make the game better. Laboratory, however, is using the system of number of backers. They realize that some people may only want/need/can afford one deck at this time, and others (like myself) want it ALL! So whether you pledge for one deck, or the whole kit and caboodle, your pledge makes a difference and essentially counts the same. So if this sounds like a game for you, and honestly, how could it not, go make this campaign a success, so eventually, we will get Season Three.